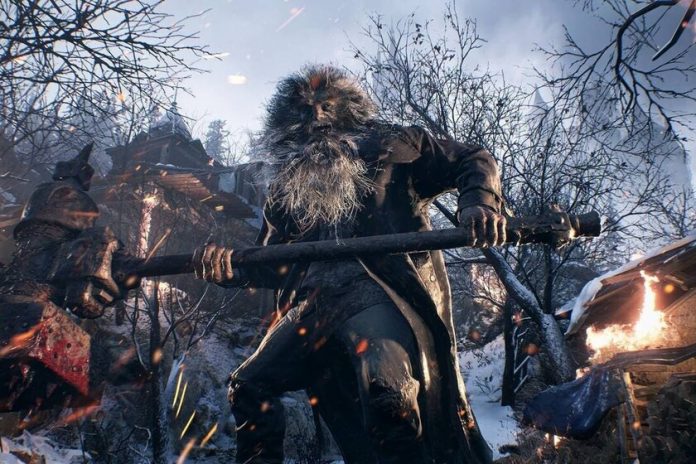 Capcom continues to fuel expectations with the new ‘Resident Evil Village’, whose launch is almost imminent: next May 7. Meanwhile, a new Resident Evil Showcase (here you have it in full) has provided new material to warm up the atmosphere. And taking advantage of the 25th anniversary of the saga, the Japanese company has continued to give news about parallel projects dedicated to the franchise. These have been all the news.

This is the new trailer for the game, and the truth is that Capcom has highlighted all the spectacularity that characterizes the latest installments of the series, above other more terrifying aspects. Of course, there is Lady Dimitrescu, the undisputed icon of this installment, but also some mysterious and aggressive creatures created in an underground factory, a giant lake with a bug included, the possibility that we spend much of the game handcuffed, terrified and scorched villagers, and references to the previous installment of the series. And Chris Redfield, of course.

Trailer of the new game demo

The new demo of ‘Resident Evil Village’ will allow players to delve into the plot and have a first contact with action and terror. Yes, and bringing the game’s tone of urgency and anxiety into real life, it will only be available for eight hours, as of May 2. Of course, Playstation 4 and 5 users will have certain advantages, such as enjoying these sessions first, with a separate village and castle. 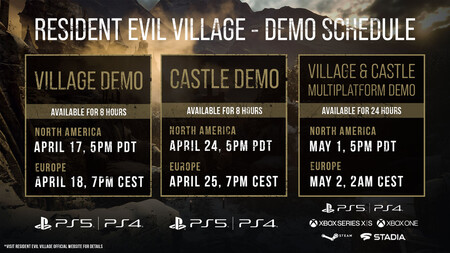 In addition, the demo can already be pre-downloaded on both Sony consoles. These separate areas of the town and the castle that will be open can be enjoyed in half-hour sessions from almost now: from April 18. In the image above these lines are reflected all the dates and hours of play in which the demo is enjoyable (on Xbox, PC and Stadia, it will only be available 24 hours). In both cases, the playing time is limited: 30 minutes in the separate demos and 60 in the joint version.

There will be Mercenaries Mode

Although it has been rumored for a long time, Capcom has finally made it official. The objective is, as in the most classic incarnations of the game, to clear levels of enemies as fast as possible. Piece-rate power-ups and action without too much contemplation in a way that will have to be seen how it fits with the neo-gothic that Capcom has injected this time to the stages. It will be unlocked after the game’s main mode is over.

In July 2021 it will arrive on Netflix the first of (we predict) a long series of animated productions set in the ‘Resident Evil’ universe. In this case, and accompanied by a trailer, we have new details about the plot of this series: after ‘Resident Evil 4’, Leon and Claire meet again during an attack of the dead on the White House. Pure exploitation of series B which we like.

There has also been news about the reboot in film and real image of the series: Capcom has announced that filming is practically finished, and the post-production phase has begun.. At the moment, unfortunately, there is no release date: the continuous delays of the production companies’ plans due to the pandemic mean that Capcom still does not want to pronounce on the subject.

A true classic of the franchise, the game that injected action to the series by taking it away from its first steps, will have a version for virtual reality. ‘Resident Evil 4’ will not arrive, like the rest of the deliveries to date, in a remake to use (at least not for now), but in a collaboration between Oculus Studios, Armature Studio, and Capcom for the Oculus Quest 2 VR system.

The experience of ‘Resident Evil 7’ in virtual reality was certainly terrifying, so we will have to check how a more action-focused game suits the format, the chases and the bosses. We will know more next April 21, with the launch of ‘Village’ practically around the corner.

A logical crossover: ‘Dead of Light’

The competitive and asymmetric online horror game is becoming a true who-is-who of horror franchises. It is the turn of ‘Resident Evil’, which celebrates its 25th anniversary next June as a guest in the twentieth chapter of the saga. The teaser reveals very little in terms of monsters, but the presence of the Umbrella logo makes it clear that we are on familiar ground.