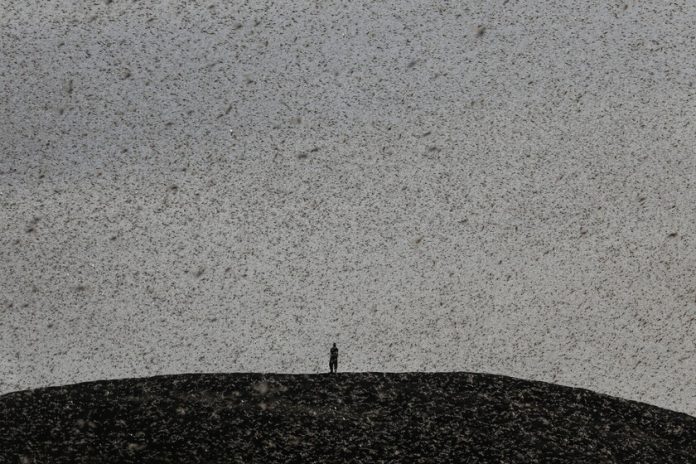 Locusts are one of the main drawbacks each year when it comes to cultivating crops in different parts of our planet. Not the locusts themselves but billions of them made into pests that devastate all the lands through which they pass and that until now had been fought with quite traditional methods.

However, something happened last year. Different organizations began to work together to try to stop the plague of locusts that, as every year, would destroy a large part of the crops in Africa in 2020. And with a mobile application as the center of a coordinated plan, the 2020 plague was contained.

An enlarged problem, and much, by climate change

As reported by the New York Times, in 2020 there was a locust infestation on the surface of Africa of such magnitude that it affected countries in which similar problems had not been suffered for decades. Climate change caused a plague of such caliber that locusts invaded Kenya, Ethiopia and Somalia, countries where lobsters were extremely rare.

As Keith Cressman, a senior UN Food and Agriculture official, recounted, these countries “had not faced anything of this magnitude since the early 1950s.” Thus, different organizations got to work to find a creative solution that may mark the way to deal with these pests in the future. And the mobile was at the center of the entire operation.

At first, the possibility of rewriting all the software with which lobsters were tracked until that moment was raised, but the focus changed when it was proposed to create an app for smartphones that would allow each farmer to function as any of the designated pest experts to stop the invasion of the locusts. So instead of creating new software for experts, Each farmer was given a “mobile expert” installed on his phone.

After the idea was approved, an app that PlantVillage used to track armyworms was redesigned. This application used artificial intelligence and machine learning to detect the development phase of maggot larvae, so that these pests could be attacked from the root. What was done was adapt this app to recognize locust larvae and all this was constituted in the new eLocust3m in an adaptation process that lasted only one month.

An expert in every farmer’s pocket 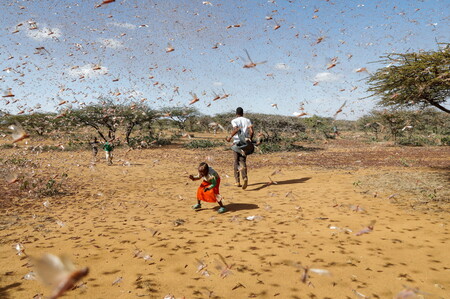 A swarm flooding Naiperere, near the Kenyan town of Rumuruti in the end of January. When the rains come, the locusts can form swarms of more than 15 million insects per square mile. Photograph by Baz Ratner for Reuters.

The operation of the app itself is quite simple, since the farmers only had to photograph the lobster larvae once they were located, and the app was in charge of determining at what point in their development cycle they were and anticipating their final hatching. At the moment in which a larva was located, photographed and its vital process was determined, the app fixed the GPS coordinates to the discovery, sending the data to the PlantVillage headquarters.

eLocust3m helped identify and geolocate lobster larvae, indicating where and when they would hatch

This process helped to build, in just a few days, a complete map of when the locusts would hatch, starting the subsequent plague. With this map in hand, drawn from more than 240,000 lobster larvae records, fumigation routes were developed adapted to the development phases of the larvae, so that they would attack at the ideal moment to stop the process.

READ:  Spotify teams up with Facebook to listen to music directly on the social network with an integrated mini-player 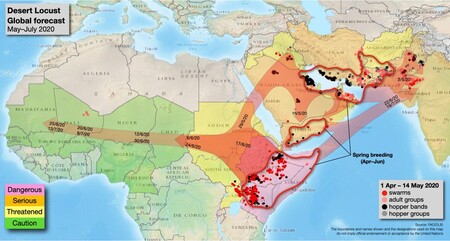 Since there were few airplanes to spray pesticides on the indicated fields at the indicated time, everything was coordinated to develop satellite-coordinated fumigation routes with the help of various companies that did their bit to make eLocust3m more efficient and effective. With this new process of identifying larvae from the mobile, FAO estimates that since February 2020 the loss of agricultural products worth 1.5 billion dollars has been avoided and that this has saved the lives of more than 34 million people .

A fantastic example of how having pocket computers and good AI-based software can go a long way toward contributing to the overall well-being of a region. Penn State University entomologist Dr. David Hughes says that the same approach used to curb the locust infestation in East Africa could be used to combat other weather-related disasters.

“Lobsters show how we can collaborate with artificial intelligence […] This can be a game changer for hundreds of millions of people as we adapt to climate change. “- David Hughes