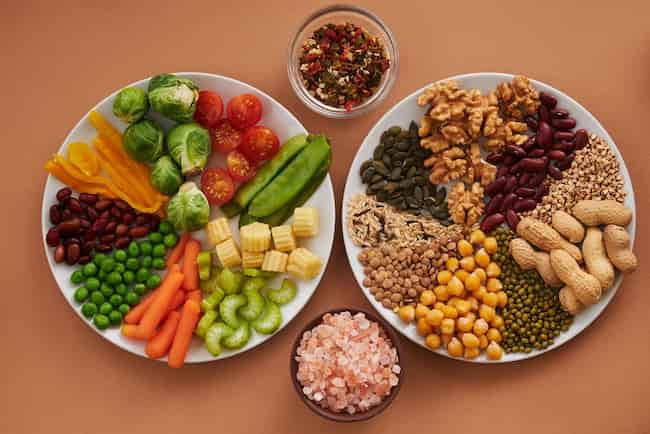 Eating Vegan has many benefits both physically and mentally. Just a switch to a vegan diet can significantly affect your health. With an ever-increasing number of scientific studies highlighting the health benefits of eating vegan, people are increasingly adopting this lifestyle choice to improve their overall health and well-being.

Overwhelmingly, there is a considerable amount of science-backed evidence from various nutritionists, physicians, scientists, and researchers that eating plant-based foods significantly improves an individual’s health compared with a person who consumes animal products in one or another more meals per day.

Historically, it is believed that early man consumed primarily plant-based foods until advancements in technology made hunting more accessible. Thus, animal products became prevalent in the human diet over time.

I haven’t eaten any meat in the last two months, and I feel fantastic; my mind is clear and calm.

The Benefits of Veganism:

Following a vegan diet has many benefits ranging from improved cholesterol levels to increased energy levels. Many studies suggest that eating vegan can significantly enhance an individual’s health compared with eating animal products in one or more meals per day. Following are some science-backed reasons why eating vegan is your absolute best option for sustained good health:

READ:  What Are The Symptoms of Osteoporosis?

(2) suggested that increasing your cereal fiber intake could help reduce high blood pressure, which could be another reason why vegan diets are so healthy.

Studies suggest that individuals who adopt a plant-based diet see significant increases in their HDL cholesterol.

(3) and significant decreases in LDL and total cholesterol

(6) showed that patients with Type 2 Diabetes could improve blood sugar control, decrease insulin requirements by 22% and lower their cholesterol levels by 11% when adopting a strict vegan diet. Another study

(7) suggested that eating more whole grains, fruits, and vegetables and less sugar and starch could help individuals with Type 2 Diabetes.

READ:   Check Boost Your Metabolism: 10 Ways to Do It

• Reduced Risk of Cancer  One study

(8) suggested that women who eat a vegan diet may have a decreased risk of cancer, particularly breast, cervical and ovarian cancers. Furthermore, research shows that eating foods such as carrots, tomatoes, and onions reduces an individual’s risk of developing various forms of cancer

(10) suggests that cruciferous vegetables such as cabbage and broccoli can significantly protect against colon cancer.

(11). Foods such as avocados and nuts also contribute to increasing the individual’s energy levels

(12) showed that eating a vegan diet for one year may improve bowel movement frequency and diminish symptoms of bloating. Furthermore, foods high in fiber such as beans, whole grains, and vegetables help maintain good bowel health.

A vegan diet is often low fat, cholesterol-free, and rich in fiber, which encourages weight loss by eliminating your food cravings. Many people have tried a vegetarianism or veganism diet to lose weight because they don’t have to starve themselves from the food they love to eat – pieces of bread, desserts, etc.

READ:  Benefits of Jackfruit and its Seed Nutrition

Following a plant-based diet is the healthiest way to lose weight because it’s high in nutrients and low in calories. One study

(13) suggested that vegan diets are more effective for weight loss than non-vegetarian diets.

Research suggests that meat consumption is linked to an increased risk for heart disease, stroke, diabetes, and various forms of cancer.

(15). Furthermore, one study suggested that following a vegetarian diet reduces the risk of Autism by 60%