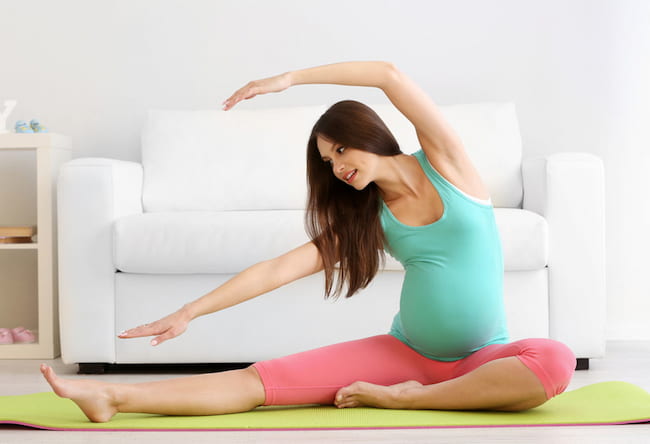 Importance of Exercise During Pregnancy

During pregnancy, it is important that women remain active because exercise reduces the risk of gestational diabetes and promotes cardiovascular health. Now, new research suggests that aerobic activity during pregnancy may actually help babies’ brains develop normally. The findings were presented at Neuroscience 2010, the annual meeting of the Society for Neuroscience in San Diego.

“Our findings suggest that children born to mothers who maintain an active lifestyle throughout their pregnancies have increased brain development very early on in life,” study author Kelle H Moley, MD said. “In addition to being beneficial for overall long-term brain development and cognition, these changes may improve motor function by increasing the number of neurons involved in the movement.”

Vigorous during pregnancy was linked with higher scores:

The researchers evaluated the impact of aerobic activity such as running and swimming on pregnant mice. The animals were separated into three groups: one that maintained a sedentary lifestyle, another that ran at moderate intensity, and a third group that ran vigorously for an hour per day during pregnancy and lactation.

At birth, the brains of the offspring in the vigorous exercise group had more cells than those in both other groups. Dr. Moley added: “Although we found greater brain growth among offspring of mothers who exercised vigorously throughout pregnancy, all levels of maternal physical activity increased cell production over the sedentary control animals.” The team also observed improved coordination and balance when pups from exercising mothers were compared to other pups at two weeks old.

Earlier this year, a study in the Journal of Obstetrics and Gynaecology found that exercising during pregnancy may be linked to lower rates of postnatal depression.

Exercise has also been shown to benefit different stages of pregnancy; it has beneficial effects on your weight, sleep, and energy levels during pregnancy.

There are many benefits of exercising regularly, some of which include:

READ:  Cause Shortness of Breath

Most Health professionals recommend that you should be exercising at least 30 minutes per day on most days leading up to the week before birth with most types of exercise recommended including walking.

For those women who were not physically active prior to pregnancy, most Health Professionals will recommend they start exercising without any extremes or heavyweight training until the body has adjusted to the pregnancy.

which month to start exercise during pregnancy for normal delivery:

Exercise during pregnancy is a topic of controversy and confusion, as some studies have shown that exercise can help prevent gestational diabetes while others suggest it may increase the rate.

The consensus from multiple studies indicates that women who are physically active before becoming pregnant tend to start earlier and continue long into their pregnancies, while sedentary women begin exercise toward the end of gestation or not at all. In other words, if you were an exerciser before conception, you’ll want to keep up your activity level throughout your pregnancy.

No matter how much you exercised before pregnancy, your body is in for dramatic changes during the next nine months. Most of the changes are caused by your baby’s growth and development, but increased blood volume in your body also plays a role. These factors extend beyond the muscular-skeletal system to increase your respiratory rate (because of an expanded ribcage), cardiac output (due to greater blood flow through your heart), and metabolic rate (to meet energy demands).

Many doctors recommend that pregnant women participate in 30 minutes or more of moderate exercise most days of the week. On one hand, this recommendation may help alleviate common discomforts like backache; on the other, it often is viewed as an opportunity to lose weight.

Studies show that women who begin or maintain an exercise program throughout pregnancy tolerate the activity well and actually experience fewer discomforts than sedentary women.

Pregnancy exercises for the stomach:

The first trimester poses some challenges to pregnant exercisers, especially those accustomed to exercising at higher levels of intensity. The rate of increase in heart rate tends to be lower during this time, making it hard for your body to use oxygen efficiently even when you’re not feeling breathless. To compensate for these changes, you’ll need to exercise at a lower intensity level than you were before becoming pregnant so don’t expect the same results!

READ:  The health benefits of Avocado

As your baby grows, you’ll need to increase the intensity of your exercise accordingly to ensure that you are still exercising at a level that is safe for both you and your baby.

As pregnancy progresses into the third trimester, many women will experience an increase in lower back pain due to their shifting center of gravity.

Negative effects of exercise during pregnancy:

However, not exercising during pregnancy can have negative consequences. Women who stop exercising completely when they become pregnant tend to experience more back pain and are twice as likely to develop gestational diabetes than women who continue an exercise program.

Research indicates that moderate exercise in conjunction with prenatal care will result in uncomplicated pregnancies and healthy babies. This means it’s important for you and your baby’s health to continue exercising at a level of intensity that is safe for both of you (see the chart below).

Importance of Exercise During Pregnancy:

Doctors recommend that all expectant mothers get 30 minutes or more of moderate exercise most days of the week. If you were physically active before becoming pregnant, you’ll be able to maintain this level of activity throughout your pregnancy. If you were previously sedentary, however, it’s important for you to start slowly and build up the amount of exercise time gradually.

Effects on the fetus:

Strenuous exercise might put too much pressure on blood vessels leading to the uterus, decreasing blood flow through these vessels. This reduction in oxygen can result in cellular damage that may interfere with organ formation or cause birth defects. For this reason, pregnant women are advised not to engage in strenuous exercise without first consulting their doctor.

READ:  Benefits of Cucumber During Pregnancy

The amount of weight you should gain varies by trimester, but most doctors recommend between 25 and 35 pounds for the entire nine months. Some women will gain more or less than this range; your doctor can determine what’s best for you based on your pre-pregnancy body mass index (BMI), how much weight you’ve gained so far, and your health.

effects on labor:-  You’ll also want to discuss any fears or concerns with your doctor so that he or she can ensure that aerobic activity is safe for both of you during labor. Many hospitals have modified physical assessment criteria now for women who are exercising for low-risk deliveries.

It’s important to note that some doctors and midwives recommend abstaining from aerobic activity (and sometimes all activity) while pregnant and during the first six weeks postpartum due to an increased risk of blood clots in the legs and pelvic veins.

Because it is tough for new moms to refrain from exercise, however, many exercise programs geared toward new mothers will start with gentle stretching and strength training exercises rather than full cardiovascular workouts.

Social benefits of exercise during pregnancy:

One of the most important benefits of exercise during pregnancy is that it helps women feel better about themselves and more confident in their bodies. Exercise also decreases feelings of anxiety and depression, which can affect women’s self-esteem.

Cardiovascular effects on the fetus:

Although there isn’t a wealth of research regarding the cardiovascular implications for pregnant women who participate in aerobic activities such as running or bicycling, there are some things we do know: maternal heart rate is not a good indicator of fetal well-being; however, maternal heart rate may be indirectly related to uterine blood flow and therefore influence fetal metabolism

This study suggests that if the mother feels fatigued or experiences shortness of breath that this indicates decreased uterine blood flow. The placenta regulates the movement of oxygen to the fetus through the umbilical cord, so fetal oxygenation is not thought to be influenced by these maternal symptoms.