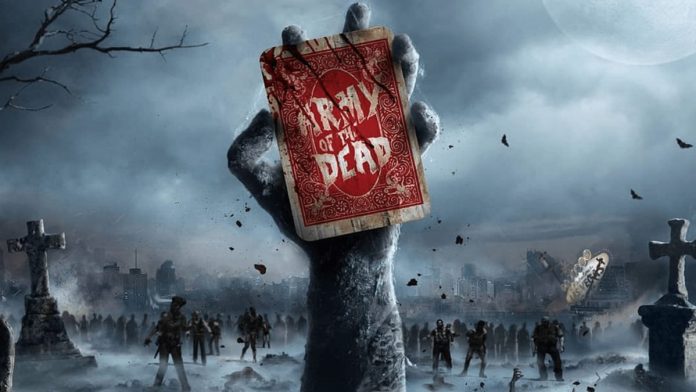 If we talk about Zack Snyder, many will come to the conversation flying the 300 flag, others the much-vaunted SnyderVerse of DC, and perhaps still others both praising and criticizing Watchmen, but few will remember Dawn of the Dead, a film that was the director’s letter of introduction back in 2004, a remake of “Dawn of the Dead” that George A. Romero gave us in 76 and that it had a script written by nothing more and nothing less than James Gunn.

It is curious that Gunn has now lost Dave Bautista for his Suicide Squad reboot precisely because of the movie at hand: “Army of the Dead”, a film that was announced as a sequel to the film directed by Snyder 15 years ago and that finally passed into the hands of Netflix, which bought the rights to Universal and Warner to end up putting Zack Snyder in command in the triple role of director, writer and producer.

Today we had the opportunity to participate in the presentation of the film, carried out by Zack Snyder himself, and which had the deferred participation of its protagonist, Dave Bautista. The production, which will be with us in less than a month, opens a new zombie universe in the popular service of streaming, which will be complemented, from the outset, with an animation series and a prequel (already confirmed) to “Army of the Dead”.

But going back to the feature film at hand, the story puts us on the track of Scott Ward (Dave Bautista) a veteran combatant with a murky past who he finds the opportunity to be able to solve all his problems thanks to an indecent proposal made by Hunter Bly, played by the multi-talented Hiroyuki Sanada.

The work in question consists of Perpetrate a robbery in Las Vegas, in the middle of the quarantine zone after the zombie apocalypse unleashed years ago. The figures are clear, 200 million dollars and 32 hours to carry out the coup. But of course, entering an area dominated by zombie infection has its risks, and that is where we will find the central core of a film that aims to mix genres to advance the vision we have about the zombie imaginary.

What Zack Snyder being a geek is something that nowadays no one escapes, his love for the zombie genre rivals his love for comics. But now returns to the genre 15 years after its last iteration in it, which also was with the remake of a capital film for the concept of the walking dead.

Already then, in the middle of 2004, the director made the odd update on the classic conception of the zombie, altering their speed and agility to turn them into a greater threat, something that has occurred in many fictions of the genre and that nowadays today, with its evolution, it has become standardized.

Asked about this aspect and what makes him fall in love with the genre, Snyder has made it clear that one of the characteristics that attracts him the most is the coral that these films tend to be, as well as the game that occurs between characters that at first seem despicable, but that throughout the plot can subvert the expectations of the public.

And this is something that it seems that we will see reflected in a film that has a very diverse cast, with Huma Qureshi (Geeta), Ella Purnell (Kate), Matthias Schweighöfer (Ludwig Dieter), Ana de la Reguera (Cruz), Chris D’Elia (Lily), Omari Hardwick (Vanderohe), Tig Notaro (Tbd), Hiroyuki Sanda and Baptist.

“I am a fan of Dave’s work, from his performances in Guardians to other roles, such as his time in Blade Runner. But I think that here he takes on a new role, he is a father concerned about his daughter, but he is also a tough guy and someone that he does not hesitate to kill when he has to. He is the leader of the team, but he must also balance that with the attention his daughter demands, which I cannot explain why, but he will also join the mission later. ” (Zack Snyder on Bautista).

A different tone and new rules

Something that has also changed is the tone with which this type of fiction is usually approached, and although it is true that the zombie was born as a trend with a certain punk spirit with respect to cinema for all audiences in the late seventies, currently the Gender can be approached from the perspective of a blockbuster, as we have seen throughout the three decades that separate Snyder’s two approaches to gender.

Now with this film, seems to want to approach the figure of the zombie from a perspective that mixes different genres, such as science fiction, robberies, terror, comedy and the most hooligan action. However, when asked about his references, he did not hesitate to resort to films such as Rescue in New York, Alien or The Thing.

This perspective is part of that step beyond what the director intends to take, and that in his role as a writer has led him to propose new rules regarding the zombie universe that we can all expect, in this sense Zack Snyder wanted to clarify the following:

“Yes, there is a certain degree of reinvention or evolution in the zombies that we will see in the film. If we had to divide the classes we could make two categories, the normal ones and the alpha ones. In the first we can find phases 1, 2 and 3, and in the second we would run into the alphas and even the elite. This evolution has led us to work with more advanced zombies, capable of opening doors and even climbing… “

In this sense, the infected bestiary has been increased with different animals, as the zombified tiger that we see at the end of the newly released trailer makes clear. And the director has already confirmed that we will see more infections of this style, making it clear that the only animals invulnerable to this evil, in the fiction that they are articulating under the Netflix umbrella, are the birds. With what if it is not here, the public can go preparing to see other types of infected animals in the other two productions that are underway.

READ:  One Punch Man reveals Fubuki's sacrifice in the manga

Dave Bautista as the big star

And if there is someone for whom this job is also special, that is their own Bautista, who has appeared in the presentation through a videoconference recorded by Zack Snyder himself. In it the director has interviewed the popular actor who wanted to explain how he was involved in all this zombie madness in Las Vegas:

“When I found out about this project I was not very interested in it, but later, in private, I was able to see the different layers it has. It has the ability to be more than a zombie movie, to have action, drama, humor … There is much more than I thought at first. Besides, I really wanted to work with you, 300 was a reference for me, I thought I could learn a lot from this and I like working with people from whom I can learn.”

The film puts the professional wrestler in the leading role, as the total leader of a group of characters that are articulated around him, something very different from what we are used to with this actor. We will see the final result of this hybridization of genres and ideas on Netflix on May 21, the day that will kick off the zombie universe that the company of streaming and of which we will soon know more news.

At the moment, there is a month left for the return of Zack Snyder to a genre in which he knew how to move very well in the beginning. If you are curious and have not seen Dawn of the Dead 2004, we remind you that you can see it on Netflix itself since a time ago.