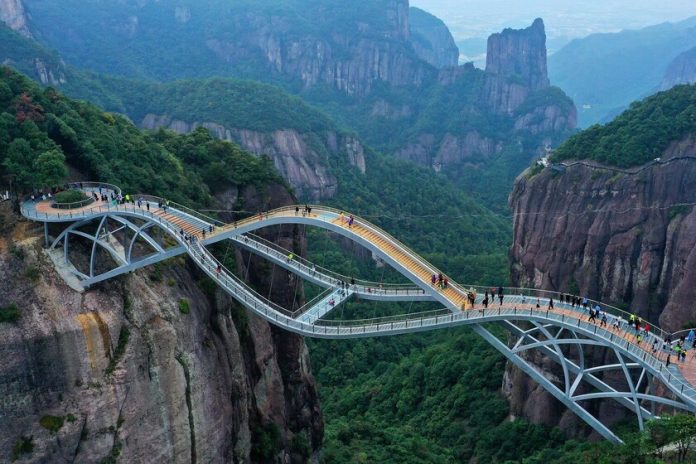 China and the bridges, the musical. What happens in this country is not normal with mega-constructions and they do not stop creating them, many of them being as impressive as this dizzying bridge shaped like DNA, which of course is a tourist attraction.

In this case, it does not break records as the longest bridge in the world that we already saw, but it is still a challenge at the engineering, construction and design level. Its about Ruyi bridge, in Taizhou, Zhejiang province (in eastern China).

Three bridges in one

The Ruyi Bridge is located specifically in Shenxianju, a scenic area that is a natural environment of mountains, cliffs and caves, in addition to the river that borders it to the west. In addition to the landforms, there are also attractions, more than 60.

It has a total length of 100 meters and is at an impressive height of 140 meters. It was inaugurated in September 2020, so it has not been standing for long, but according to Arquitectura Viva it has already received thousands of visitors.

It was designed by He Yunchang, an expert in steel structures who was already involved in the design of the main stadium for the Beijing Olympics in 2008. It is made up of three wavy bridges, and like the one in the Huangchuan Three Gorges Scenic area (the longest glass bridge in the world), it has part of its floor built in glass. Because what is a Chinese bridge if this sensation of vertigo is not created, as we also saw in the case of the Huangtengxia Tianmen Sky viewpoint (coincidentally, also in China).

Part of the floor made of glass remains in the central walkway, which joins the two sides of the bridge perpendicularly. An area that may be the one that can give a more vertiginous feeling (and that seems for the bravest, in case it is not daring enough to cross it).

Of course, we have said that it is in the shape of a DNA double helix because it certainly reminds of this shape when looking at it in profile (although in this case there are three strands and they do not intersect), but this was not the inspiration. The design (and the name) get inspired in a ruyi, a kind of traditional ornamental scepter of Chinese culture that symbolizes good fortune and power, being flat and wavy (it is as if there were three ruyi, two inverted on the outside and one in the center).

The bridge is so crazy that for a time (and because of how complicated it is on many occasions to verify the information that comes from China from outside the country) its existence was doubted. The 200,000 visitors were counted, according to local sources, in November 2020, so there are probably many more by now, maybe even more than a million, taking into account that according to the data the country has managed to control the coronavirus epidemic in recent months.