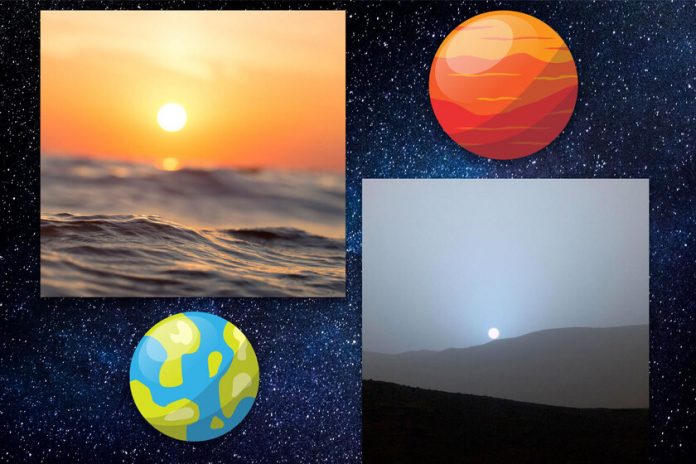 We have not set foot on Mars yet, but the fact that the different rovers that have been sent there have done so allows us to imagine a bit the day-to-day there. Not so much doing a Matt Damon in ‘The Martian’ anymore, but for example to be able to see dust storms, craters, ice or even sunsets on mars.

Of course, when we have been able to see it in the images that NASA gave us they have always shown a blue sunset, with especially cold tones in the case of what we know as the Red Planet. Although it was about subsequent interpretations and treatments, everything has an explanation, so let’s see why we have reddish sunsets on the Blue Planet and they have bluish sunsets on the Red Planet.

In 2015 we saw, thanks to the Mastcam100 camera of the Curiosity rover, this Martian sunset over one of the hills that make up the limits of the Gale crater. Three years after laying his wheels on Mars he sent us his first sunset on Mars, on April 15, at which time we talked about it.

Although it was not really the first time that a vehicle of our own on Martian soil had provided us with such views. On April 23, 2005, the Spirit rover already hunted the image of the Sun setting in the sky of Mars, specifically in the Gusev crater. An image that also provided information about the Martian twilight, learning that on Mars the sunset is longer than on Earth (about two hours).

As we discussed after the Curiosity photographs, the images captured by these cameras reach NASA computers in black and white, and later are processed and colored. And what we saw in most cases is that the photos that were shared were a cold blue and gray, very different from that orange and reddish atmosphere that until now we used to visualize for our neighboring planet.

In fact, the astrophysicist Brian Koberlein just compared these two stamps: the Earth and the Martian sunset, and also explained why we would probably see those tones in the one of Mars. The key: the scattering of light in the atmospheres of each planet.

On Earth the atmosphere is relatively dense and there is a certain type of scattering called Rayleigh scattering, corresponding to that suffered by visible light or any other electromagnetic radiation by particles much smaller than the wavelength of the scattered photons. It’s what makes the sky look blue, and that (shorter) blue wavelengths tend to scatter much more than reddish ones is the key to those lovely orange tones at sunset.

When the Sun is already low, its beams of light have a longer way to go through the atmosphere. During that path the photons are scattered due to atmospheric molecules, but it happens randomly and in all directions.

The longer it travels, the more blue photons are scattered and less we capture, which happens when the Sun begins to appear or leave on Earth

Since blues scatter much more than reds, most of the blue light is scattered, letting the red be the one captured by our retinas. That is to say: the longer it travels, the more blue photons are scattered and less we capture, which happens when the Sun begins to appear or leave on Earth.

On Mars there a much less concentrated atmosphereHence, the Rayleigh scattering occurs to a much lesser extent. But it is also influenced by the fact that gravity is much less and that its surface is much drier and more dusty.

That is why its atmosphere is usually invaded by fine and numerous dust particles, which are closer in size to the wavelength of visible light. Hence the wed scatter, which is not random like Rayleigh’s, and what causes is that the long wavelengths (red) are dispersed more uniformly, while the short ones (blue) do so at smaller angles. Namely, blue predominates over red.

The dispersion of Mie it is not something alien to the Earth, since it also happens here (it is “to blame” for the redder sunrises). But it occurs less efficiently than Rayleigh, so it is not strong enough for blue sunsets (although it is for blue moons).

In addition, the meteorologist explained Mario Picazo placeholder image that light is less intense on Mars as it is farther from the Sun, and that the solar disk of the Red Planet is reduced to 0.35 degrees (while that of the Earth is 0.5 degrees). And as Mark Lemmon, from Texas A&M University and a member of the Curiosity science team, added, during the day on Mars the sky is orange because sunlight highlights the rustiness of the dust.

Will we see more sunsets from other planets? It is difficult to think about it due to the distances and the conditions of its atmospheres (the case of Jupiter, for example), but who knows if we will be able to see the sky with our own eyes as the different rovers have seen it. For now we have to wait for what the Perseverance rover continues to show us, of whom we already have its first color photos (and high resolution), the first video and we have even heard how it rolls.