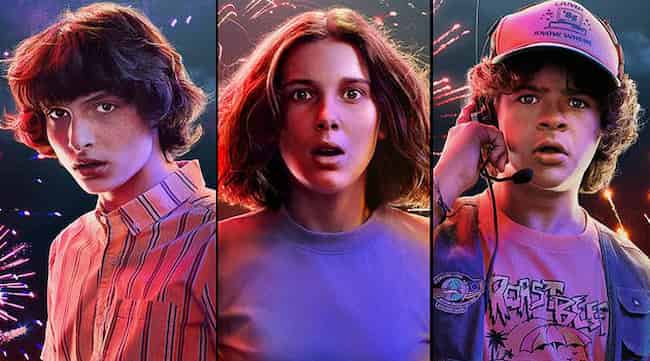 Stranger Things Season 4 Release Date: Everything you need to know

Stranger things season 4 is the upcoming season of the web series Stranger things which is a horror web series based on supernatural forces and government exploits. Stranger Things is based in 1983, Indiana, where a young boy vanishes in thin air. It is a science fiction horror drama television series produced by the Duffer Brothers.

In the story, there is a group of young children who experience those supernatural forces. Story-based on a small town where everyone knows each other, but suddenly some things are happening. The disappearance of children started, and this type of incident gave fear to the city’s people.

Like all incidents, there is one more incident. A twelve-year-old boy named Will Byers suddenly disappears near a government lab, and many people try to search him out. His mom (Joyce), his brother (Jonathan), his friends(Mike, Dustin, Lucas), and the police chief (Jim Hopper).

Things get more depressing when a strange young girl with a shaved head is searched by the friends who escaped from the evil men from the laboratory researching supernatural phenomena. The girl has some telekinetic powers and is extraordinary.

The new season of stranger things seasons 4 is about several loose ends of season 3, like hopper’s perceived death, eleven’s adoption by Joyce buyers, and relocation with her new family out of state.

So no matter what our storyline, there is only one thing for you: just entertainment. Watch this entertaining series on Netflix and enjoy season4 of Stranger things.

•The monster and the superhero

•The Massacre at Hawkin’S lab

Here are some points we understand by episodes names:

Hellfire Club is the premiere episode of the stranger thing season4  and should be released in the summer of 2022, and it looks like Hellfire club can be considered as the official Dungeons and Dragon club at Howkins High School, So we can say that it will be a good start for the season.

Dear Billy, reference to Max’s deceased brother nilly Baton in season3 and sacrifice himself to protect eleven and the gang.

Massacre in Hawkin’s Lab indicates that a lab saw or episode may be based on a scientist’s lab.

Papa is the second last episode of season four. The word papa is used by eleven used to refer to her evil father named, Dr. Martin whom we don’t see on the screen since the end of season one, where he was presumed to be killed by Demogorgon. So maybe this episode is based on Dr. Martin and eleven reunited.

Winona Ryder is in the role of Joyce Byers.

READ:  Lucy Liu joins the cast of Shazam: Fury of the Gods and will be the villain

David Harbour is in the role of    Jim Hopper.

Finn Wolfhard is in the role of    Mike Wheeler.

Millie Bobby Brown is in the role of Eleven Hopper.

Gaten Matarazzo is in the role of Dustin Henderson.

Caleb McLaughlin is in the role of Lucas Sinclair.

Noah Schnapp is in the role of  Will Byers.

Sadie Sink is in the role of Max Mayfield.

Natalia Dyer is in the role of Nancy Wheeler.

Charlie Heaton is in the role of Jonathan Byers.

Joe Keery is doing the role of Steve Harrington.

Maya Hawke is in the role of Robin Buckley.

Priah Ferguson is in the role of  Erica Sinclair.

Cara Buono is in the role of Karen Wheeler.

Brett Gelman is in the role of Murray Bauman.

Jamie Campbell Bower is in the role of Peter Ballard.

Eduardo Franco is in the role of Argyle.

Joseph Quinn is in the role of Eddie Munson.

When will Stranger Things season 4 be released?

There are no fixed dates announced for the season, but it will probably be released in the summer of 2022.

Is the Stranger Things season 4 series for kids also?

There is no such age restriction, but it’s a horror series, so there are also intense scenes, mainly for teens and adults.

READ:  86 Eighty-Six: the new anime from the creators of Sword Art Online

It’s not so. Much horror indicates the story is about a group of friends in town.

What message does the series give to us?

Stranger things, the ultimate message is to hold on to your friends, family and memories as long as possible.

Is the series based on a true story?

The storyline of stranger things is 100 per certification, but it doesn’t mean there are not tiny grains of truth.

Stranger things season 4 is a sci-fi horror television series written brilliantly. Fans are waiting for a long time for Season 4. Before these three seasons were aired, all were very successful.

There is a message for everyone: be there with your friends and family when they need you and make memories as much as possible.

Before Stranger Things season 4, three more seasons contain 8,11and eight episodes in seasons one, two, and three. The three seasons are hit and have more than an 8.5 rating out of 10, so we hope this season also gives an incredible experience.

Netflix has not made any official announcement for season 4 of Stranger things. But it reveals episode names and tons of trailers, which means we are just a few months away from Stranger Things season4, and it will be in the summer of 2022.

David Harbour – who plays Hopper – said during a Q&A that the series was “supposed to come out early (2021)” but has been delayed due to the coronavirus pandemic, which left many movies and TV shows unable to film. So be ready, guys, to watch one of the best series, and the series will premiere on Netflix.

So season four of stranger things is now happening as we all know. This show is so much awaited by the fans because they can not wait for so long for this season since the third one as we know that third season was a super blast and left so much suspense.

So fans are updated with the latest news, announcements, release dates, and everything. Although there is not much that we can know about the show but we can predict by the shootings, filming and a teaser which recently came out for some characters.

Stranger Things Season 4 Happening or Not?

Of course, because of this situation, many of us had a thought that this season is canceled or the show must have ended by the third season but no, this show is happening and will be coming out soon on Netflix.

Also, this fourth season was supposed to become out in July 2019 but because of some shooting and editing issues, they pushed it to 2020. And 2020 was bad luck for everyone in this world so for this season too.

How Many Episodes To Expect In Stranger Things Season 4?

People are so much curious and so much eager to know what will be happening in season four, also they want to know about how many episodes they will cover in this season.

As per the reports, there are chances of having eight episodes in this season like the third and first seasons. But rumors suggested that maybe there will be nine episodes because of some social media news.

When Is It Going To Be Filmed Stranger Things season 4?

Also from the new reports, the whole cast will be moving to New Mexico after the filming is done in Georgia. And this spring, the filming, and editing will start again.

Fans have to wait for a little longer because no such thing as release dates is announced by their side. As of right, we are expecting to release this season by the starting of 2022. But let’s see what happens next.