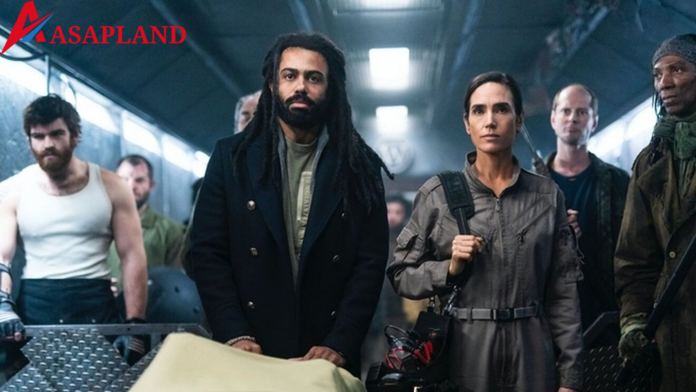 In an ice-covered world, hope is difficult to appear, but despite the difficulties and tense leadership conflicts, Snowpiercer has its bright moments. Only about 3,000 people are reported to be alive today, and this number is shrinking with each revolt. The impending arrival of Zarah’s (Sheila Vand) and Layton’s (Daveed Diggs) baby in “A New Life” demonstrates that funerals aren’t the only rites being practiced.

Childbirth is obviously risky, and the risks have grown as a result of Zarah’s decision to undergo gene therapy. Wilford’s (Sean Bean) scientists devised an experimental medicine that provides tolerance to cold weather. However, Zarah and Jose (Katie McGuinness) are suffering from severe side effects.

On the other hand, Alex, one of Snowpiercer’s engineers, sits on Wilford’s hospital bed, battling with her emotions for her surrogate dad as she witnessed the horrors of his rule last week. When Bennett advises that Josie should train as an engineer, it opens up a whole new scenario of endless possibilities for her. It’s also possible that they’re both starting a new romantic connection.

As he barely believes Mrs Headwood, Layton calls up Dr Pelton to look out for Zarah. Ruth is approached by Pike, who asks about putting forward a challenge against Layton. After assuring her trust in the existing leader, the hospitality chief moves him.

The name tree busts into flames while Ruth and the fellow passengers rejoice after the birth of a new life. Bess starts to investigate and is shortly accompanied by Layton. Lilah Jr. is doubted of being the culprit who put out the explosion. Oz and Lilah Jr. put their suspicions to rest. Bess and Layton realise that a considerable percentage of ethanol is neglected as their investigation progresses, implying the chances of explosion.

Ben asks Sykes to help Javi cope with his ordeal. To lend help, she gets together with Javi. When Ben sees Josie at the engine car, he offers to teach her how to regulate the train. Josie gives her consent to that. Josie warns them that she is unable to feel any pain while they are spending time together. She also asks if Ben is still looking for Melanie.

They also have an on-the-spot intimacy exchange. In the Snowpiercer, a second fire breaks out after an eruption that arrives perilously, almost costing Layton his life. Javi is concerned because the storage space has no explosives.

Pike appears to be displeased with Layton’s leadership and decisions since his re-emergence as the Snowpiercer’s leader. Ruth gets his advice on taking over the Snowpiercer from Layton and suggests that the former Tailie does not want his “former friend” to change the train’s and passengers’ fates.

His interests in New Eden also imply that he declines to consider Layton and Asha’s fallacy. Pike is seen hiding in the railway car that flares when Layton comes at the end of the episode, suggesting that he has pertained to the cause of the explosion and flames. Henceforth, the mystery remains on who else was involved in making the outburst happen.