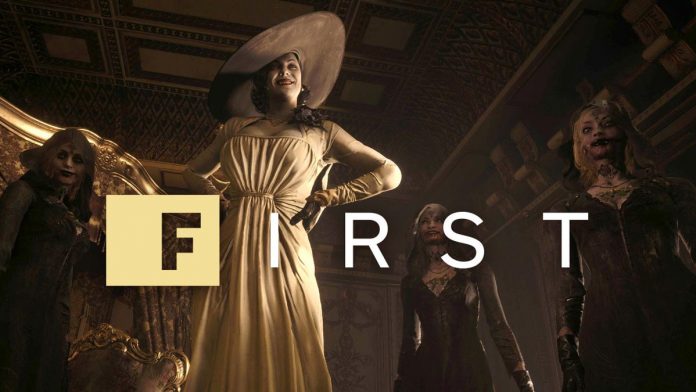 Alcina Dimitrescu, almost 10 feet tall, and better known as Lady Dimitrescu, became an instant worldwide phenomenon when she revealed herself as one of the main villains of Resident Evil Village.

Even without her fierce claws, Lady Dimitrescu’s size is so overwhelming that any man will feel weak and small when confronted with her, and Village’s main protagonist Ethan Winters is no exception. A humanoid villain of this size and power is something we haven’t seen before in Resident Evil or any video game franchise.

Today, we can exclusively reveal as part of IGN Firts (which will be packed with content about Resident Evil Village during the month of April) a never-before-seen concept art for the new favorite Internet video game character, Lady Dimitrescu, along with her Three daughters.

Art director Tomonori Takano was responsible for the design of Lady Dimitrescu. Responding to high demand from fans, he previously announced the height of this fearsome character. Although the staggering 2.9 meters include her high heels and wide-brimmed hat, Lady Dimitrescu still easily exceeds the height of any living human. However, some of the tallest people in recorded history get close enough to give Lady Dimitrescu’s height a sense of reality, making her even scarier.

But what about your shoe size? We asked Takano to measure this too, and he came back with impressive results. Lady Dimitrescu’s shoe size is 17.3 inches (44cm), which is almost twice the average size for women’s shoes. It also surpasses Jeison Rodríguez Hernández’s Guinness World Record for the world’s largest feet by almost 4 centimeters. Takano designed Lady Dimitrescu’s shoes based on an actual pair of high heels, which he digitally scanned and resized to match the giganta’s formidable height.

But we didn’t go to Capcom headquarters in Osaka just to talk about feet. Along with director Morimasa Sato, Takano told us how she came to be the domineering Countess of Castle Dimitrescu, and the two were overwhelmed to see her creation become an internet phenomenon even before the game was released. “We intentionally made the character design a little more outlandish than in Resident Evil 7, but no, we didn’t see it coming.”says Takano laughing.

Sato mentions that creating characters that leave an impression was a theme of the game from the beginning, and the reactions to Lady Dimitrescu’s reveal assured him that this had been the right choice. “The core game concept of a village setting was decided in the early stages of development”, says Sato. “After that, we started thinking about the characters. To create an attractive town with a sense of place, the characters that live there are extremely important. For the main enemy characters, we think about the area that each and the other would be in. kind of experience they could provide. The approach of starting with the characters and building an experience from there may seem similar to Resident Evil 4. “.

Also set in a town with a variety of locations, Resident Evil 4 is loved by memorable characters like Bitores Mendez and Ramon Salazar. “There are quite a few other characters with a similar impact to Lady Dimitrescu in the Village, so you can expect that.”, says Sato.

Lady Dimitrescu may not be the only villain in Village, but according to Takano, her design dates back to the beginning of the project. Remember how the team started prototyping the character. “We reused Mia’s character model from Resident Evil 7 and made her wear a dress and a hat.”explains about his first tests. “I thought this would be enough to give it a ghostly quality, but we couldn’t make it feel terrifying. So we decided to make the character model much bigger. That was the beginning of Lady Dimitrescu.”. The art director continues: “I drew a piece of concept art where she leans through a door. That’s when I felt like this was going to work.”.

READ:  Angelina Jolie Has a "Twin Sister" Or She Is Almost Unidentical Like Two Drops of Water

From there, the team created an area and experience to match the newly designed villain, which became Castle Dimitrescu, a gothic vampire castle. “The original concept was a castle populated only by women”recalls Sato. “We tried many different things to make the Countess scary and feel like a boss character. There were also ideas to make her more creature-like, but in the end we felt that an imposing woman was the simplest but most powerful thing we could do.”.

Lady Dimitrescu is not just a tall domineering vampire-like woman. Her fashion was inspired by styles from the 1960s, and Takano hopes this will set her apart from other gothic villains. “I felt that simply doing a gothic aesthetic would be a bit lacking in originality, so I wanted to add a modern idea to that premise.”, explains Takano. “We looked at the fashions of the era with actresses like Audrey Hepburn, as well as The Addams Family. We use these fonts as suggestions to create a less conventional gothic setting.”.

Lady Dimitrescu is not the only fatal woman stalking Ethan in the castle; his three beloved daughters also haunt him. Bela, the eldest daughter, is calm and has a strong head on her shoulders. Cassandra is a sadist who likes to kill. Daniela is the youngest daughter and the craziest and most delusional of the three. “Ethan has a family that he’s trying to protect, so we wanted to have a family for Lady Dimitrescu as well, to provide a contrast.”, explains Sato. “The concept started as a castle with a hundred witches inside, but that was difficult to implement in a video game format, that’s why we ended up doing it like this”, dice Takano. “But actually, when you play the game, you can notice that the scenario still comes quite close to that idea. All types of enemies within the castle are women. With Lady Dimitrescu as the cult guru, we have created this hierarchy of women. Men. all these women drain their blood, so you could say he’s the opposite of Dracula. “.

READ:  The first major PS5 update is coming tomorrow and will allow you to store games on USB drives

“Outside, in front of the castle, you can see bodies that have had their blood drained, that look like skinny scarecrows, and they are all men. It is an environment where women are very strong.”.

This horror experience in which a relatively weak male character is terrorized by towering women seems to be inspired by a type of sadomasochistic fantasy rarely seen in video games. Within the Resident Evil series, Lady Dimitrescu and her three daughters are a threat like we’ve never seen before.

To guide the series in bold new directions, Sato says that in the planning stages he encouraged the team to try as many unusual ideas as possible. “We are not the type of team that starts with a niche idea and begins to expand little by little”, explains Sato. “When we try new ideas, we start by looking for something extreme. As we go along, the idea usually begins to deviate from pure horror. So, in the end, we have to bring the experience back to horror.”.

According to Takano, the hundred witches in the original concept were to be mostly naked. A giant countess and her three creepy daughters is what that idea became once the team “brought him back to horror.”.