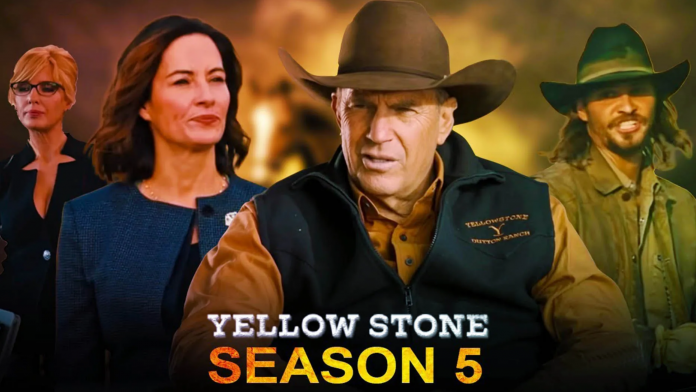 Yellowstone Season 5 Is Under Production. When Will It Come Out?

Yellowstone season 4 ended, and it was overwhelming, to say the least. The season completed with a gunshot and due justice after the family was attacked.

The incident occurred at the end of season 3 when John, Kayce, and Beth were the targets of a mass murder attempt. Fans have constantly been talking about the fifth season of Yellowstone, after a thrilling finale, we never imagined.

Nonetheless, we are amused to announce that there’s a release date, after all. As we know, a significant character exited from the show with Garrett’s death. Despite all the sacrifices, the Dutton family never seems to get peace from the countless threats.

The finale was a big success for Yellowstone, with more than nine million viewers watching on the premiere day. It has become one of the biggest TV shows, as Paramount decided to release the prequel, 1883, and a spinoff, 6666, which will release around the corner.

The more important news is that production of the fifth season is starting soon. The production will begin on 5th May 2022, along with planning on the prequel.

David Glasser, Yellowstone’s executive producer, has confirmed when the show will resume filming and when Season 5 will premiere on the Paramount Network. Season 5 is expected to return in the fall, according to Glasser, who anticipates filming to commence in May.

We can tell that both the premiers will happen somewhere around the month of December, or better, during September.

The fourth season of Yellowstone premiered to approximately 15 million viewers, putting it on par with other mega-hits such as Game of Thrones and The Walking Dead. A prequel, a spinoff, and two additional shows from the creator

Taylor Sheridan has also been given the go-light by Paramount. These are practically green flags. However, if you are still unsure, we got a confirmation from de facto Dutton himself.

Summer Higgins (Piper Perabo) and Carter (Finn Little) were among the newcomers in Season 4, and season five is set to follow suit. The whole cast list won’t be confirmed until after the season five announcement, so we might have to wait long enough for any additions.

At this point, we are more or less clueless about the release of Yellowstone season 5. We can only assume the timeline.

However, if you have missed out on any of the previous seasons or want to re-watch the show, you can easily avail of seasons 1, 2, and 3 on Peacock with a monthly subscription of $4.99 per month.

For season 4, you can watch it on Paramount Networks. The show is also available on streaming platforms like Philo and FuboTV. For further updates, stick around with us.