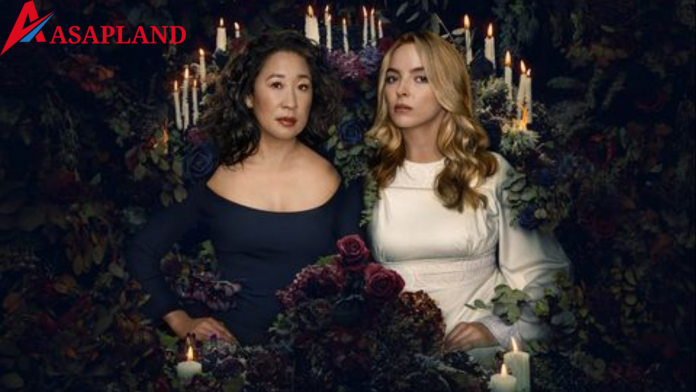 The knowledge that Killing Eve’s upcoming fourth season will also serve as the show’s final season is a bittersweet consolation in a television landscape full of unknown endings and prematurely cancelled series — a certainty amidst so many shows that either overstay their welcome or get cut off at the knees before getting the chance to deliver a satisfying resolution.

With the looming climax in mind, one question dominated the time between the cliffhanger from the previous season and the debut of a new plot: After that supposedly pivotal bridge scene, what happened to Eve (Sandra Oh) and Villanelle (Jodie Comer)? What would happen next once, not just one, but both of them opted to look back after deciding to walk away from the past?

Eve (Oh), Villanelle (Comer), and Carolyn (Fiona Shaw) are all in separate places in Season 4. Following their encounter on the bridge, Eve is out for vengeance, while Villanelle has established a new society to show everyone and prove that she is not a “monster.” Carolyn goes to significant measures after killing Paul to track The Twelve and the criminal who ordered Kenny’s assassination.

Killing Eve continues to be interested in the paradox that exists inside the character of Villanelle, disputing whether the character is really prepared for a change while also reminding viewers of her true nature as a psychopath. And, to her credit, Comer makes the most of what she’s given, expressing Villanelle’s struggle against her worst inclinations with little more than a subtle shift in gestures and body kinetics.

As if to make up for the stale primary characters, the film spends a lot of time bouncing around a broad ensemble, casting a wide net but catching little nothing. (In case you forget a name or three, the third episode throws each name up on screen in the series’ characteristic big, bold, colourful fonts.)

Carolyn (Fiona Shaw) has been relegated to the role of “culture attaché” at MI6 and, bored out of her mind, must seek out new partners to reclaim her place in the game. Konstantin (Kim Bodnia) isn’t much of a character, but his position is set to expand following Episode 3. Hélène (Camille Cottin) has a slightly bigger part this season than in the last one.

READ:  CD Projekt Red to develop AAA games from The Witcher and Cyberpunk simultaneously starting in 2022

The character arc has shifted to a certain level indeed. Fiona Shaw is still fantastic as Carolyn. However, the character is confined to a considerably smaller setting, a far cry from where she first appeared as Eve’s MI6 boss, who was certainly self-estimated. It’s also hilarious to watch where Konstantin’s character has got to since the third season ended — and his initial reunion with Eve exemplifies what the series does best, even if other side-plot aspects aren’t as good or engaging.

Because they’re criminals who have broken innumerable norms in their personal and professional lives that should be punished, Eve and Villanelle can’t end up together when Killing Eve concludes.

They’re completely selfish, no matter how much they’d like people to believe they care about their family and friends. And as entertaining, exciting, and as sensual as their story has been so far — with other shows even emulating their style — they don’t deserve the enjoyment they’ve taken away from so many people.