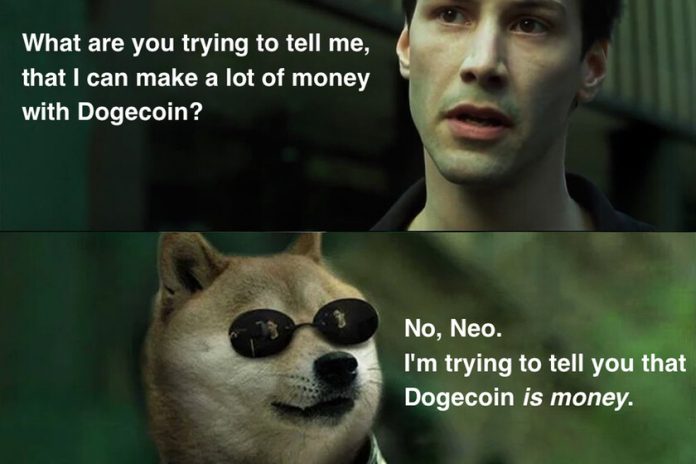 Financial markets live in troubled times. As much as that tidal wave is now lost in our memory, just two months ago GameStop captivated world public opinion. A group of amateur and organized investors managed to raise the stock market valuation of a chain of video game stores doomed to decline. Their frenzy evidenced the power of new shopping tools, such as Robinhood, and the seismic potential of meme-investing.

And there is no better meme than Doge. Than Dogecoin.

To the moon. The cryptocurrency, founded in 2013 explicitly as a joke, has skyrocketed in market value in recent weeks. Today it is around $ 40,000 million of capitalization, already above historical companies such as Ford or Marriott. A figure and a dizzying graph explain its meteoric rise: it has grown by 19,000% over the last year, drawing an almost vertical curve capable of dwarfing the achievements of Bitcoin. If in May 2020 a Dogecoin was barely worth $ 0.002, today it is already over $ 0.40. Only in 2021 it has grown by 8,000%.

The most expensive joke in the world

Recall that this crypto which now ranks 5th in the sector ($ 50 billion) is not based on any fundamentals, only LOL and the tweets of @elonmusk pic.twitter.com/OdJ2UCxsEM

A for the $ 1. The stated goal of cryptocurrency enthusiasts, organized in forums similar to ar / WallStreetBets, is to reach parity with the dollar on April 20. The chosen day is obviously a joke: 4/20 according to the American date format. 420 is another recurring meme in the Internet underworld for its strong association with marijuana. If successful, the investors involved would declare the day as “Doge Day”, in a mix of a stock market milestone and a meme transferred to the realm. This is how things are at the top of the financial markets.

It is important. If anything because it reaffirms a trend that we have witnessed somewhat puzzled in recent years: investment as a meme. Elon Musk bears part of the responsibility for Doge’s triumph. Has tweeted inconsistencies on the coin regularly. Allegedly cryptic phrases such as “No high, no lows, only Doge”, “D is for Dogecoin” or “Doge Barking at the Moon” that operate both as satire of investment gurus and as a call to action. Each tweet has always been accompanied by a surge in the value of Dogecoin.

Something that Musk had already put into practice with Bitcoin. The difference here is that Dogecoin is not real. It is a joke. And yet their valuation is growing like wildfire. Dogecoin operates as a paroxysm of a process, that of investment in comedy format, as a ridiculous farce, already experienced by the markets in January, with GameStop.

Until where? The word that best defines Dogecoin is “bubble”. Like other cryptocurrencies, it tends to suffer huge rises and falls in its valuation. Which implies risks. The question today is if only Dogecoin is a bubble or if the entire cryptocurrency market is also, ask that Bitcoin, after so many comings and goings, seemed to have successfully dodged (and that it is beginning to unsettle other cryptocurrencies, such as Ethereum). In the case of Dogecoin, growing that much also has a bit of an existential crisis. It is developed by this article from Intelligencer:

Therein lies doge’s dilemma: what started out as a joke has reached, in its own right, Wall Street proportions, to the point that it requires a certain degree of seriousness (…) No matter what the founders of Dogecoin designed it as something void of value (…) The cryptocurrency has confused its own foundational footprint, reversing the assumption of its creators that just because something shouldn’t have any value it won’t.

The meme. And in seriousness there is always the risk. The adventurous investors who entered AMC or GameStop late know this well. The joke always ends. In any case, Dogecoin follows its path. It is a total reformulation of the elements that have “value” in contemporary economics. Anything can own it if enough people give it to them, since apps like Robinhood have democratized access to markets. Dogecoin seems hell-bent on taking the joke to its last consequences. And that happens to obtain the $ 1 of valuation in the indicated date.