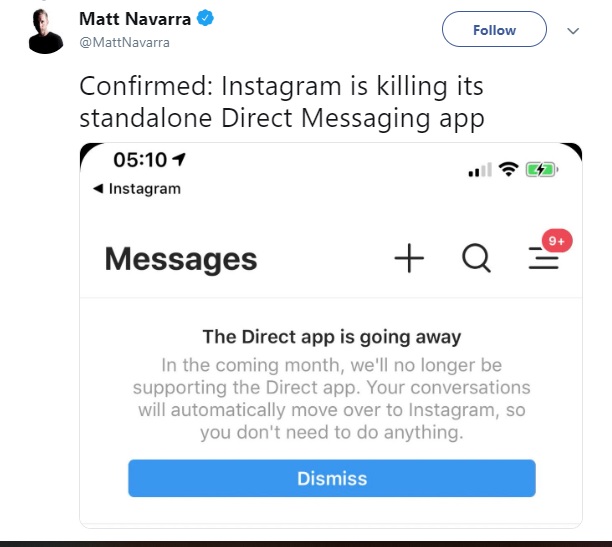 In fact, the app was used to rival app Snapchat.

The service Direct will be discontinued and Facebook and Instagram will be working towards the development of the direct messaging service on the main Instagram app.

Confirmation to this information was made available through the tweet of one of the users of the Direct app.

However, there isn’t anything you need to worry though.

Well, if you happen to have been using Direct app for the Instagram Messaging, you will not lose any of your chats directed through the Direct app.

It should be worthwhile to notice that the Direct app – if the claims from Instagram are to believed – were designed as some sort of testing.

READ:  'For All Humanity', or how what-if is an excellent resource for a series

In fact, the app was one of the most shortlived applications in recent times from one of the major services.

The Direct app was unveiled in December 2017 and has been prepared to shut down within five months of its life span.

As soon as you install the app, the Direct messaging service on the main Instagram disappears.

Thus Direct is your only solution to create your direct messages.

Why is the app being discontinued? Instagram is not available to provide the reasons and not responding to the queries.

Perhaps this has something to do with some sort of internal survey or similar concept. We would assume that the users wanted all the information in one single app.

A lower level of engagement can be one of the reasons for culling the Direct app.

So, if you are using the Direct app, make sure you are migrating to the main Instagram app soon.

However, Instagram will transfer your chats to Main Instagram app before Direct app is closed down forever.