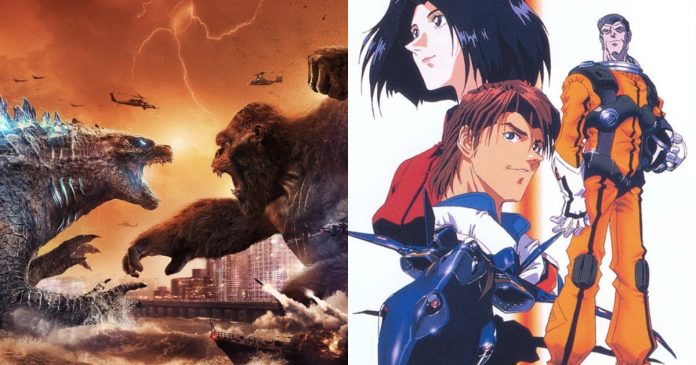 Godzilla vs Kong it has proven to be a rare beast among lesser prey. The movie is an unapologetic, loud and thoroughly entertaining Kaiju blockbuster, packed with wacky and cartoonish plot twists.

Polygon’s interview with him director Adam Wingard revealed a wealth of information about the creative process behind the film’s larger sets, as well as key details about the director himself.

Despite all the critical scruples about his movie Netflix “Death Note of 2017”, the man knows and loves the anime. After all, Godzilla Singular Point is the new series of the platform and wants to high its premiere along with the anime of Pacific Rim: The Black.

The influence of anime on Godzilla vs Kong

Aside from more obvious touchstones like Akira 1988 film by Katushiro OtomoAs a key influence on the lighting and scale of the film’s final showdown in Hong Kong, Wingard cited two other anime as key influences on some of the most notable Godzilla vs. Kong moments.

These are Macross Plus O Robotech. Pointing out these two is noteworthy: the relationship between the two anime has been strained and tangled with each other since 1985 when Harmony Gold USA, the television production company that owns the U.S. licensing rights to the Macross franchise, created 85-episode Robotech. .

Harmony Gold USA has retained the license rights Macross ever since, and has mostly prevented a home video release, or any release period, of the original Macross that would conflict with the company’s own Robotech series.

Macross Plus is also notable, and an obvious reference for Godzilla vs Kong, for featuring the work of one of the most acclaimed effects animators in anime history. This is Ichirō Itano (Megazone 23, Mobile Suit Gundam) and made such an impact with his style that he became an animation icon with “Itano Circus.”

What exactly is Macross Plus?

A sequel to the original 1982 television series, Super Dimension Fortress Macross, the OVA (and the feature film reissue) follows the intersecting stories of Isamu Dyson and Guld Bowman, two old friends turned staunch rivals who are selected as pilots of two competing programs to develop their own fighter jet.

As the two try to overcome each other, the pair also compete for the affections of their mutual childhood friend Myung, the producer behind a popular holographic pop idol named Sharon Apple, who harbors her own dark secrets.

The anime combines emotional drama and sci-fi action filmed through a breathtaking aerial combat choreography courtesy of Itano, who served as the anime’s “special skills director” and one of the production assistant mechanical designers.

Itano’s talents are evident in each of the anime’s aerial combat scenes, particularly in the film’s penultimate climax where Guld is pushed to the limit of his ability in a dangerous and fast-paced dogfight with the experimental Ghost X- ship. 9, which is owned by an AI.

The scene is chaotic and riveting, growing amid a cacophonous blast of lasers and a heartbreakingly heroic ending. In particular, the script and score for Macross Plus were written and composed by Keiko Nobumoto and Yoko Kanno respectively, who would later collaborate with Watanabe again on the aforementioned Cowboy Bebop.

The sequence that Adam Wingard cites as direct inspiration in Godzilla vs Kong seen in the film’s first aircraft carrier fight, and the shooting of the Hollow Earth hovercraft during the film’s midpoint, is the so-called Itano Circus.

What is the Itano Circus?

The Itano Circus is a visual trope in anime, seen in any scene where a small, unique character or object is shown trying to outmaneuver a swarm of incoming projectiles, often illustrated as a swath of whispering lasers or missile trails, launching and intertwining in unison.

The Itano Circus is almost ubiquitous throughout the anime medium, seen in everything from Cowboy Bebop: The Movie and Eureka Seven to SSSS, Gridman and FLCL Progressive, although Itano himself has said that only three other animators have managed to emulate his work successfully.

These three are the creator of Neon Genesis Evangelion, Hideaki Anno, and Cowboy Bebop animators Yasushi Muraki and Masami Goto. The Truth News reminds you that you can watch some of these anime series or movies on Netflix.

The appearance of the trope in the Godzilla vs Kong action sequences themselves is one of the film’s affectionate nods to the middle of the film. Japanese animation and the indelible influences of the creators behind it, an element without which the film would be even poorer.