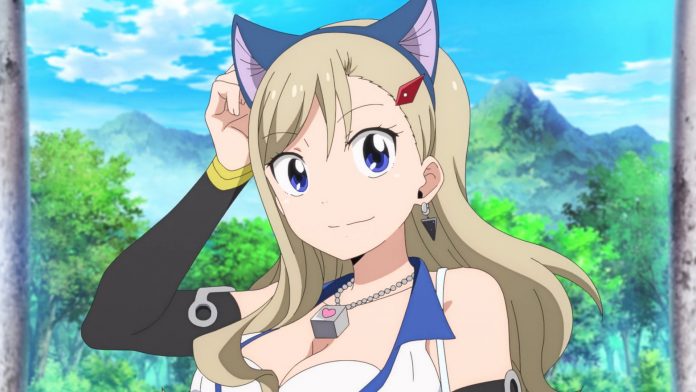 Serialized on the pages of Weekly Shonen Magazine starting from June 2018, EDENS ZERO is one of the three longest-lived works born from the brilliant mind of Hiro Mashima, an author who in just over twenty years of career has already drawn over 120 different volumes (for all the details on the sensei we suggest you consult the special dedicated to the handyman mangaka Hiro Mashima). Given the sensational success across the globe from the unruly Fairy Tail, which saw a rapid expansion of its imagery after its conclusion, it was only a matter of time before EDENS ZERO also received an animated transposition.

Unable to wait for the western debut of the series, which according to what was communicated it will only arrive on our side of the globe during this autumn, we took advantage of the recent airing in Japan to view the first episode in the original language. Without further delay we therefore offer you our preliminary impressions on the anime that in a few months you will be able to view on Netflix with subtitles – and maybe even dubbed – in Italian.

Towards a starry sky overflowing with adventures

Following the example of Rave – The Groove Adventure and the aforementioned Fairy Tail, EDENS ZERO begins with the chance encounter between a combative boy and a pretty girl who are absolutely unaware of the daring adventure that awaits them at the gate and that will lead them to change their way forever. whole universe.

The young and attractive Rebecca she longs for the channel on which she publishes multimedia contents of her own creation to reach the ambitious and difficult goal represented by one million subscribers, and to do so she usually visits the most unusual places, in order to create original shots that can entertain the public. This is the reason why the adventurer, in the company of the faithful talking cat called Happy (a character who shares the name, much of the design and even the voice of the funny Fairy Tail mascot), goes to the so-called Granbell Kingdom, a gigantic playground with fantasy colors and entirely populated by robots. Upon arriving at the entrance, the girl is greeted with a special and surprising parade organized by the automatons, as she is the first human to visit the amusement park after a hundred long years of total inactivity. Overwhelmed by the enthusiasm and availability of the machines, which for the occasion reopen the shops and restart all the various attractions, the girl wears her iconic cat ears and throws herself headlong into the making of her next video.

It is during the filming that she comes across a gigantic robot at first sight malfunctioning and the boy who should fix it: this, however, is the only human in the whole planet Granbell, and having never met other people in flesh and blood. he has no idea how to behave to make friends with the aspiring influencer. In full Mashima style, the lacking social skills of the bizarre protagonist, whose appearance is also unkempt and vaguely threatening, give life to a hilarious curtain (partly with an erotic background) between the two boys, prompting an irritated Rebecca to want stay away from him. However, when the young woman witnesses the sincere bond of friendship that binds Shiki to the lively robots of the place, she realizes that this, despite the disrespectful behavior and the sinister air, is not actually an evil individual, but the exact opposite. In fact, during a lavish banquet the beautiful adventurer discovers that the clumsy is a little rough Shiki would like to explore other realms, but that he never dared to leave Granbell because if he left there would be no one left who could fix the loving machines he lived with for a full decade and from which he was then raised.

If, when Happy and Rebecca arrive, the latter have thrown an exaggerated party, the next day they tie the girl and her pet to a pole, with the intention of charring them under the eyes of an incredulous Shiki, whose words do not seem no longer reach the robots.

As explained by the Castellano, who turns out to be a mighty fighting automaton, Granbell’s machines have long waited for the landing of a ship capable of traveling in space: after getting rid of the owner, they intend in fact use it to get one’s revenge on the hated human beings, whose fault is that of having stopped visiting the once very popular planet and having therefore abandoned them to themselves for an entire century. Apparently betrayed and even attacked by robots, poor Shiki has nothing to do but resort to his Gravity Ether Gear (the ability to reconfigure the Ether that flows in the human body to transform it into force and obtain extraordinary powers, such as the ability to manipulate gravity to fly in midair, walk on walls and fall at full speed in the desired direction) to save Happy and Rebecca, and leave with them for the open space, where he will finally be able to realize his hidden dream: to find hundreds of new friends.

READ:  Shingeki no Kyojin's editor revealed some details about the author

As pointed out at the time in the preview of the manga of EDENS ZERO, the work has inherited all the typical characteristics that distinguish the amusing works of Hiro Mashima, such as the light-heartedness of the story, the pyrotechnic fights, the demented comedy, the exaggerated reactions and the “generous” poses that feed hilarious curtains even in the most inopportune and dramatic situations and moments of the journey undertaken by Shiki and Rebecca. Those precise peculiarities that over the years have pushed a large slice of the public to avoid the proposals of the sensei, but which on the other hand continue to give laughs to the increasingly numerous supporters of the mangaka. As you may have guessed, EDENS ZERO is a work that does not take itself too seriously, and which, while not giving up on telling a fascinating story full of twists (perhaps not too original) mostly aims to amuse the reader with an exquisitely Japanese humor and the inevitable ration of fanservice. On the other hand, Mashima himself has never hidden to write exactly what loyal readers want, sometimes even putting aside their personal tastes in order to meet the needs of the public and of their editor.

While reusing various themes, stereotypes and solutions already present in his previous works, with EDENS ZERO the sensei has nevertheless made a rather unusual choice, abandoning the fantasy-like settings in which he had always sailed up to now to devote himself instead to the creation of a sci-fi world where space travel, virtual realities and futuristic megacities are the norm. A detail that in the first episode emerges only in the final stages, but that starting from the second (which unfortunately ended up online a few weeks in advance) will help to dispel the feeling of being struggling with a mere clone of Fairy Tail. On the contrary, EDENS ZERO slowly builds a complex and layered imaginary, as well as completely different from those we have explored previously, where extraordinary ancient abilities dating back to a so-called “dark” age take the place of the now usual magic.

Moving on to the technical sector, the work of Unfortunately, JC Staff was unable to satisfy us very much, as the product once again lends its side to the usual critical issues that afflict the series entrusted to the well-known animation studio (in this regard, we also recommend reading our preview of La via del apron, an anime created by JC Staff as well and recently published on Netflix with Italian dubbing). Putting aside close-ups, which on average are acceptable, EDENS ZERO has a lack of detail which does not at all do justice to the rich tables drawn by Mashima: the characters are often sketchy, poorly defined and sometimes even deformed, not to mention the ineffective chiaroscuro or the perennially static backdrops that accompany the most crowded scenes.

Obvious technical limitations that we had taken into account for some time, and which unfortunately lead us to regret the imperfect – but still satisfying – work done by A-1 Pictures with the various animated adaptations of Fairy Tail.

The same goes for the sound accompaniment, whose songs did not seem to us as overwhelming and adrenaline as the epic tracks used at the time during the battles supported by Natsu Dragneel and guildmates. Nothing to complain, however, on the dubbing: a single episode is not enough to evaluate the vocal combinations made by the production, but on the other hand the presence of professionals such as Takuma Terashima (Apollo in Sousei no Aquarion, Klaus Lunettes in Black Clover) e Mikako Komatsu (Tsugumi Seishirou in Nisekoi, Maam in the recent remake of Dragon Quest: Come on – The Great Adventure) in the role of the two main protagonists should at least guarantee us an impeccable interpretation.