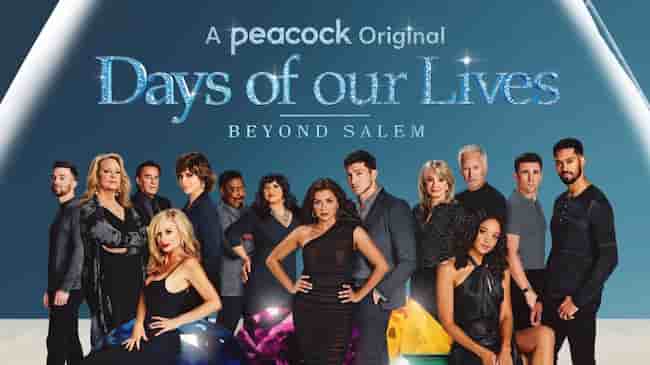 Days of our lives: beyond Salem is a spin-off of original television series named ‘Days of our lives. The original series was first released on 8th November 1965 and it has 14000 episodes !!! The Spin-off arrived on 6th September 2021. It has 5 episodes with an average runtime of 40 to 50 minutes. The cast consists of some former characters of the original series as well as new ones giving a fresh experience to the audience. There are mainly 7 couples at different places, relaxing and unwinding. Soon they get assigned the task of searching and securing precious jewels. The search will bring out lots of drama and comedy. A pure refreshment.

The series is about people living in Salem, who goes to America and Europe to explore the world and relax and unwind. They are seven couples! They are enjoying unaware of the fact that a mysterious adventure awaits them. Almost 30 years back, the Kingdom of Alemania lost their precious peacock with 7 precious jewels on it. They have got the peacock back but the 7 gems are missing. They are amethyst, ruby, sapphire, emerald, citrine, and orange diamond.

30 years back in 1991 a precious golden peacock known as ‘Alamainian peacock’ with 6 precious jewels on it, was stolen. Shane convinces Marlena and John to get those back and find out where in the world they are. The six jewels are amethyst, ruby, sapphire, emerald, citrine, and orange diamond.

There is a total of 7 couples including Marlena and John who are now on a mission.
John and Marlena heading to Zurich, Ben and Ciara off on a romantic getaway in New Orleans, Chad visiting some old friends in Phoenix, and Abe, Paulina, Lani, and Eli vacationing in Miami.

They knowingly or unknowingly get involved in the mystery of 6 stolen gems and now ISA agent Billie is on the world ride solving the case.

Shane sends Marlena and John to an auction where sapphire was being sold and asks them
to buy it on behalf of ISA. Not only that he gives them a gun, in case they need it.
However, the trio mentioned above was unaware of the fact that Anna & Tony, Carrie & Austin are also in town. Anna and Tonny also seem interested in sapphire.

It’s a race against time for ISA agent Billie Reed as she crosses the globe in search of this missing treasure. Billie is another ISA agent assigned the same task. She meets Ciara and Ben when she goes undercover disguised as princess Gina. On the other side, Paulina shows off her orange diamond ring to Abe, Eli and Lani. The ring is stolen at gunpoint however Eli and Lani manage to capture one of the gunmen. Shane delivers an update to Paulina and Abe regarding her stolen ring. Anna & Tonny and John & Marlena are now on a bidding war at auction.

Billie meets fellow ISA agent, Kyle Graham while Ciara agrees to arrest the daughter of Gina – Greta Von Amberg. Anna has a necklace with sapphire now and Kristen disguised as Sister Mary Moira steals it smartly. However, happiness does not last long as Billie and Kyle track down Kristen and retrieve the sapphire. On the other side, Lani and Shane recover the stolen orange ring. Ciara and Ben go undercover as Greta and Austin and at a party that they eventually discover to be the sex party. There, John and Carrie find out two missing gems in Austin’s bag. Will, Sonny, and Chad are put on a competition to take drugs if they want to retrieve Emeralds.

Everyone believed that it was Shane who brought Emerald however it turns out that it was his evil twin brother Drew! John, Anna, Tonny, and Marlena could not believe that they got tricked by Shane’s twin!
Carrie suddenly realizes that ISA agent Kyle set up Austin by putting two gems in his luggage and he is still in custody. It later turns out that Kyle was a double agent working for Drew!! The figurine wasn’t simply priceless and ornamental, it actually doubled as an evil homing device that could cause explosions, carnage, and chaos in cities like Miami and even Salem.
Drew tried to explode the place however he could not as Leo had given him fake Emerald and saved the world unintentionally!

In the end, Sonny and Chad got real emerald and Billie and John with the help of Marlena, take down Drew and Kyle or whatever her real name was. ISA drops all the charges on Austin.

So 5th episode was all about realizing the threat that Peacock poses.

It was filled with lots of funny and light moments, and a lot of drama too! It is a kind of happy-go-lucky series you watch while chilling on Sunday evening. It’s mood refreshing. And to add the cherry on top it has just 5 episodes with a maximum 50-minute runtime. Hence can be binge-watched easily.

Season 2 is neither canceled nor approved as of now however we can expect the second season as the original show was also one of the longest-running television dramas and we expect the same from the makers of ‘Beyond Salem’. Even it gets approved, we can expect it to arrive somewhere later in 2022.

Let’s see what refreshment season 2 brings. Stay tuned and let us know your views in the comment section.