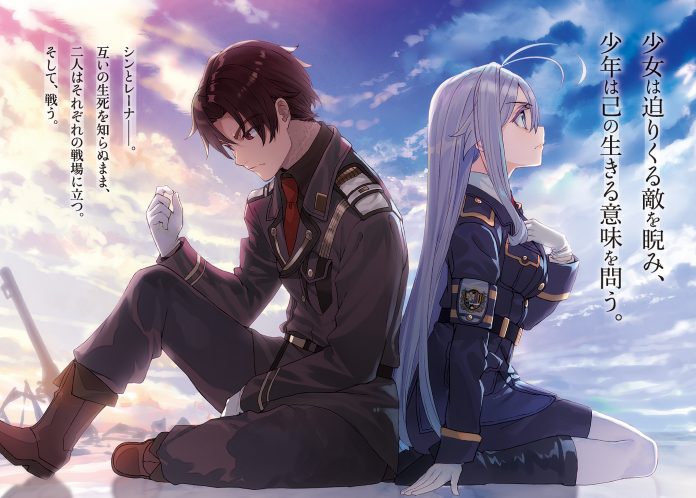 Characterized by a truly sizeable number of productions, and a desire to experiment with the forms and content of their work, the A-1 Pictures studio has long been looking for a new jewel to add to its “crown”. Waiting for his franchise peak, Sword Art Online, returns to show itself with the new SAO: Progressive project, and that the main series is also carried forward (whether it concerns the short span of Moon Cradle, or that you go directly to Unital Ring), the Japanese studio has decided to embark on a new, great, adventure, bringing to our attention the animated version of the light novel 86 – Eighty-Six, the result of the pen of a great author such as Asato Asato.

Away from echoes isekai, which now seem to have invaded the industry, 86 – Eighty-Six is a complex and fascinating creature, which embraces multiple genres, and which deals with issues that are not easy to deal with, not even for one medium like the anime, always capable of upsetting. On April 10 it came out on Crunchyroll the first episode of 86 in simulcast, and we’re here today to tell you our first impressions of what appears to be the next big anime of the season.

The world presented to us by the direct gem of Toshimasa Ishii is that of the Republic of San Magnolia. A seemingly perfect and peaceful state, at the cutting edge of technology, and in good health. The great merit of San Magnolia is that of having successfully repelled for nine years the attacks of a neighboring empire, which had invaded the Republic through unmanned military vehicles, the fearsome Legion. From the beginning of the story there is therefore talk of political deception and how simple it is to filter events through the eyes of the powerful. The unsuspecting inhabitants of San Magnolia, all characterized by the trait of albinism, have always been convinced that they too are defended by totally automatic robotic means, and without the need for a human being in command. The truth, as we discover in the introductory minutes, is quite different: to the 85 idyllic and lively districts of the Republic, there is an eighty-sixth one, completely hidden by the government and whose existence the citizens are unaware of, inhabited by human beings who are not not even considered as such, but they are treated like animals, or worse, like puppets to be sent into battle, without rights.

The only fault of the inhabitants of district 86 is that of belonging to the ethnic group of “Colored“, or non-albino men and women who, several years before the events we are witnessing, were marginalized by the political regime of the Alba, the dominant social class in the state. The Colorata fight day and night, to defend a place that does not even recognize them the fundamental rights of human beings, but perhaps something seems to change on the horizon. The first protagonist whose events we follow is the young woman Vladilena “Lena” Mirizé, a handler belonging to the Alba, whose task is to remotely lead the troops of the 86 into battle against the Legions. Lena is immediately presented to us as a girl with a good soul, but determined, and her character stands in direct contrast to the other members of the army of the Republic, who lead a dissolute existence without any practical interest in their assignment. In addition to the sense of duty towards her own nation, Lena also seems to be the only woman who is really interested in the lives of the Colorata poor, trying to treat them as people, and not as pawns to be moved along a chessboard.

READ:  What Is CooChie Snot?

It is through the violent clash between these two worlds, the privileged one and the discriminated one, that the first episode moves, perfectly designing a dramatic and disconcerting picture. The anime shows a powerful and well-developed contrast: the apparent perfection of the life of the ruling class seems, however, marked by an underlying sadness, by a melancholy and gray veil that does not reflect the ease and comforts of the Alba. Everything in San Magnolia looks cold, gloomy, aloof and completely devoid of joy, even the architectural style of the city, and the clothes its people wear.

The other great protagonist whose events we follow is Shinei Nouzen, a member of the accursed district in spite of himself, and known by the name of Undertaker, gravedigger, for his thankless task of putting an end to the lives of his comrades with whom he fights gravely wounded, and who are impossible to cure. The sense of duty is also very strong in Shinei, and the desire to protect his teammates, more than himself, is the only reason that pushes him to react, and to fight again, in a totally meaningless war. Through the eyes of Undertaker, we have the opportunity to explore a profound and extremely brilliant topic in 86 – Eighty-Six, namely that of life as an outcast, on the edge of a cruel and greedy world, and without the possibility of realizing one’s dreams. It is surprising how, in just one episode, the series has already had the opportunity to convey the drama and horror with which those who are called by the Alba simple “drones” are forced to live together, even without exaggerated or forced tones.

The narrative power of this work lies precisely in its ability to bring the audience to reflect, without forcing them to do so. A series of philosophical, existential, and ethical dilemmas transpire from the words of the characters, yet we don’t feel pushed to make them our own. Wisely, we are offered the chance to passively witness the thoughts of others, but in the end we ourselves will be willing to question how fundamental the values ​​of humanity and social justice are, and why those rights should never be denied to others. beings, which differ only in the physical aspect. The talent of Toshiya Ono, who has dealt with the composition of the anime, is crystal clear, and has given a balanced and well-measured form to the narrative tension that is created between the more reflective moments, and the more tight and action ones. In this sense, we are faced with a mature and conscious work, which has already had the opportunity to surprise.

One of the features that stands out most from this introduction to the world of 86 – Eighty-Six is ​​his splendid technical sector. Surely, the fact that an expert study such as A-1 would have dealt with a publication so complex and delicate to handle, could only give us hope for its realization. Indeed, the work “betrays” its belonging to the branch of Aniplex based in Tokyo in every single element. From the character design, inspired and conceived by the skilful hand of Tetsuya Kawakami (yes chief animation director for the original SAO), up to the soundtrack and the opening – the beautiful one 3-pun 29-byou of Hitorie – everything reminds us with familiarity of the shows we have already loved madly in the past. However, and it is right to underline it, it is not a derivative operation: on the contrary, it is in the great originality of the animations, settings, and atmospheres, that the work inspired by the novels of Asato Asato finds all its beauty. A-1 seeks a balanced and well-thought-out balance between old and new, between a present trademark (and that it is right for it to be used and valued), and the desire to give life to an excellence able to stand out and shine with own light. With this in mind, some scenes show the best that currently available CGI has to offer, and we were really impressed with it magnificence of the fighting scenes, with drones and vehicles with a unique and peculiar style, and with excellent sequences, which make us fully understand how much effort has been made to create a fascinating and unusual universe.

With such careful use of the means available, we cannot fail to highlight how each of the characters we have seen so far has been created with the right dose of inspiration and simplicity: without going to outline in an exaggerated and overabundant way the protagonists, the way of sobriety opted in this case, allows us to admire even more thoroughly the small precautions and splendid details that characterize our heroes. Both Lena and Shinei are none other than the mirror figure of the other, and even artistically the differences between them emerge until they seem the two sides of the same coin. Like the people who inhabit the big city and the small district 86, even the two main settings are exactly opposite.

On the one hand there is the architectural richness and technological refinement of the metropolitan areas; on the other hand, the bare and border lands, the theater of the conflicts between the Republic and the Empire, are much simpler, almost rural looking, and certainly not avant-garde. A constant antithesis between the inhabitants of the different and separate realities, which is shown both in the different behavior and in the aesthetics of the representatives of these factions so contrasting with each other, make the figures we have already known, in our first look at the reality of San Magnolia, among the most iconic currently present in the world of Japanese animation. We want to dedicate a final note to all those who, before the advent of 86 – Eighty-Six on Crunchyroll, did not know the franchise. The history that we will witness in this divided and at war world will deal with some of the most complex and difficult issues that are, never as in this historical period, current even in our society. With a critical and cynical eye, we will see the worst results of de-humanization, and the attempted control by a sphere of power against a “minority”.

There will be political intrigues and internal problems in a system close to imploding, with all the intense machinations that will ensue. Nonetheless, they will never overrule one nature devoted to action and frenzy of a serialization that, first of all, wants to show us the horrors of war, which is certainly spectacularized by this publication, but which in any case does not make us insensitive to human pain, and to the desperation that a conflict can cause. Let’s get ready for a great journey, together with an anime who wants to make his voice heard loud, and who has every intention of surprising the world.