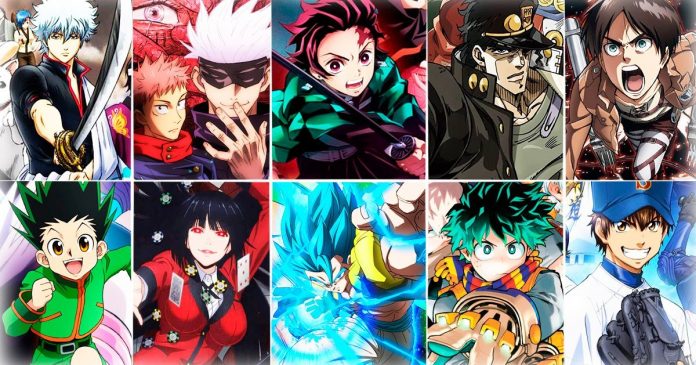 This spring of 2021 is full of new releases, there are more than 50 new series from anime that will be released during the rest of the year.

For many, 2020 was called the year that this will not be named due to the pandemic that the entire world is currently suffering and especially it was also a very strange year in terms of anime since several high profile anime productions they stalled and were forced to reschedule.

Series like The Promise Neverland rescheduled from the second season, feature films such as the recently released Evangelion: 3.0 + 1.0 Thrice Upon a Time were affected and the theatrical release in the United States of Demon Slayer: Kimetsu no Yaiba the movie

Unfortunately we have missed so many expected events that unfortunately could not be carried out due to the pandemic and that this 2021 will be released little by little, The Truth News has the list of the 10 animes that arrive the rest of the year.

10 exciting anime to watch this season:

The last season of Fruits Basket It’s sure to be the most emotional yet, and that says something for a show that regularly questions childhood trauma, adult loneliness, and the ordeal of being known.

Last season concluded with the idealistic orphan Tohru Honda discovering the true nature of Akito, the head of the mysterious Sohma family.

As the “God” of the zodiac, Akito wields great power and influence over members of the Sohma family, especially those who are affected by the curse. Essentially, they are forced to comply with Akito’s orders whether they like it or not.

Determined to break the curse they are under, for everyone involved, but especially for the despised Zodiac Cat, Kyo, who will basically be incarcerated for life after graduation, Tohru must dive deeper and figure out how to undo the ties that bind the Sohmas together.

The previews for the upcoming season promise some love confessions, stolen kisses, and moments of tears.

This spring couldn’t be a more unexpected season for Godzilla fans, with the premiere of the Studio Bones anime series My Hero Academia and Orange, Godzilla: Singular Point was just days away from the release of the latest live version of the American action movie Godzilla vs. King Kong.

Not to be confused with Polygon Pictures’ trilogy of anime films Godzilla: Planet of the Monsters, Godzilla: City on the Edge of Battle, and Godzilla: The Planet Eater, Godzilla Singular Point features a new cast of characters and an original story., written by Toh Enjoe and directed by Atsushi Takahashi.

The series also features Eiji Yamamori, known for his work on anime classics such as Princess Mononoke, Spirited Away, and The Wind Rises, as the series’ kaiju designer.

Godzilla: Singular Point premiered on Netflix in Japan on March 25 and will be available to stream worldwide later this year.

‘Joran The Princess of Snow and Blood’

Joran, the princess of snow and blood, may sound like a riff from Toshiya Fujita’s 1973 revenge drama “Lady Snowblood,” but the premise is much more unexpected and supernatural.

Directed by Susumu Kudo and written by Rika Nezu and Kunihiko Okada, the anime is set in an alternate history version of Japan in 1931.

Where a mysterious source of energy known as the “dragon vein” has given the country miraculous technological advances and a clandestine order of executioners known as “Nue” who work on behalf of the Tokugawa Shogunate.

The series follows Sawa Yukimura, a blue-blooded girl and supernatural abilities, who embarks on a campaign of revenge against the Nue for murdering her family when she was a child.

Joran The Princess of Snow and Blood premiered on April 6 in Japan and will air this spring on the Crunchyroll website.

Megalo Box 2: Nomad sees the return of series director You Moriyama, along with series writer and composers Katsuhiko Manabe and Kensaku Kojima.

The series somewhat resembles its 2018 predecessor, Megalo Box 2: Nomad is sure to be one of the most exciting and beautifully animated action anime of this season.

Megalobox 2: Nomad premiered on April 4 in Japan and will air on Funimation.

We named the fourth season of ‘My Hero Academia’ as one of our favorite anime of the past year, describing it as, “the darkest series as well as the strongest, as it further explores the complications of a world where almost everyone is super-powered.”

The fifth season of MHA will begin with the Joint Training Arc, in which Class 1-A and Class 1-B students face each other in a series of team battles that demonstrate how much each class has grown.

In the wake of All Might’s retirement and Endeavor’s new and strained role as the new number one hero, MHA’s fifth season will likely see Izuku Midoriya and the rest of UA Academy’s Class 1-A face new challenges and a villain. even scarier.

Season 5 promises to bring exciting new reveals to the questions left at the end of last season, as well as the shocking 100th episode of the series.

Season 5 of My Hero Academia premiered on March 27 in Japan and airs on Crunchyroll and Funimation.

SSSS.Gridman by Studio Trigger was one of the most satisfying and amazing favorite anime of Fall 2018, the anime is owned by Tsuburaya Productions tokusatsu.

SSS.Dynazenon is the next installment of the franchise “Gridman Universe“and continues the story of its 2018 predecessor, although the” how “exactly remains a secret.

SSSS. Dynazenon premiered on April 2 in Japan and will air on Crunchyroll.

‘The World Ends with You’

With a long-awaited sequel, NEO: The World Ends with You, scheduled to come out sometime this year, now is the perfect time to get acquainted with the series through studio Domerica and Shin-Ei Animation’s.

The game’s signature art style is guaranteed, executed through an ingenious combination of 2D and 3D animation that brings Tetsuya Nomura and Gen Kobayashi’s original artwork to life.

The World Ends With You premieres April 9 in Japan and will air on Crunchyroll and Funimation.

This anime is based on the manga of the same name by the author of A Silent Voice, Yoshitoki Ōima.

‘To Your Eternity‘follows a mysterious and amorphous immortal sent to Earth by an even more mysterious force, embarking on a personal journey in search of knowledge and meaning as he assumes the form of those with whom he forms a strong emotional bond.

Featuring director Mashishiko Murata and scriptwriter Shinzo Fujita, not to mention the title track courtesy of Kingdom Hearts singer Hikaru Utada, To Your Eternity resembles a weird and elusive hybrid of John Carpenter’s The Thing with brooding supernatural drama. from the 2005 anime Mushishi.

To Your Eternity premieres on April 12 in Japan and will air on Crunchyroll.

The latest series from LeSean Thomas, Yasuke, is easily one of the most intriguing new anime to come out this spring.

Based on the real life story of a former slave turned samurai by Oda Nobunaga.

The series is directed by Takeshi Koike contributing design work, LaKeith Stanfield providing the voice of the title character, and musician-producer Flying Lotus contributing the soundtrack to the series.

With animation accredited to the MAPPA studio, Yasuke has all the ingredients for a dazzling production. The series arrives on the Netflix platform this April 29.

It is an anime series produced by MAPPA, Avex Pictures, and Cygames. The series aired in Japan between October and December 2018.

All the girls are from various time periods and died, but were brought back alive to be zombie idols.

He has an enormous amount of antics humor in each episode, leaning towards the zombie genre, whether his limbs are spread or makeup smudged, revealing his zombie appearances.

The second season of the anime Zombie Land Saga: Revenge It will premiere on April 8 and will air this spring on Crunchyroll and Funimation.

Campaigns for the 2021 elections begin in Mexico. Follow us on TikTok and stay informed.