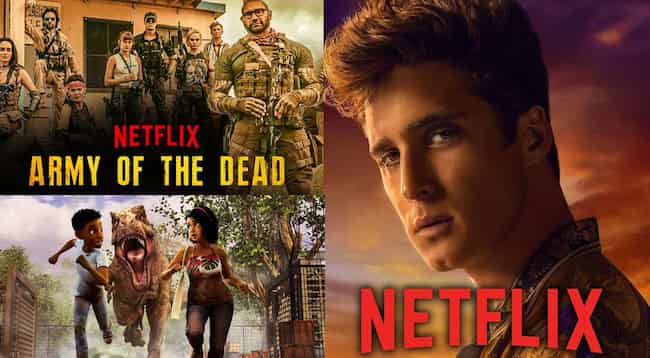 Army of the Dead

This will be released on Netflix by the 21st of May. This is one of the biggest movies on Netflix this year and he is none other than Zack Snyder who is in so much demand and all thanks to HBO MAx to release him for justice league.

This movie is kind of a crime horror in which a squad of mercenaries filtering a zombie to LAs vegas for his ultimate heist.

If you want to watch this movie, most of the theatres have been showing this movie and if you don’t want to, wait a little longer for it to release it on Netflix just after two days. Till then if you have not watched the trailer yet, you can go watch below:

It released today on Netflix, 19th of May 2021. There are so many licensed movies and most of them are only thrillers and adventures, in addition, it’s worth noting that such movies will be releasing this whole year just on Netflix so we can binge-watch them anytime and anywhere we want.

The whole movie’s directors and writers are Eshom and Ian Nelms. The movie is starring great personalities with great acting skills Josh Hawkes and Octavia Spencer. This is the reason why people are most excited about this movie.

If you have not watched the trailer, watch it right below this:

Hell yeah! Season two is coming on Netflix by 19th May 2021. The only season two where everyone was so excited about! This series is based on a crime thriller. So take a subscription of your like and binge-watch this series right now.

If you have not seen the trailer yet, you can watch it right below:

Full Preliminary List of What’s Coming to Netflix This Week

Stay tuned for the next update, bookmark this website for the latest news and upcoming Netflix movies in addition to, series too!