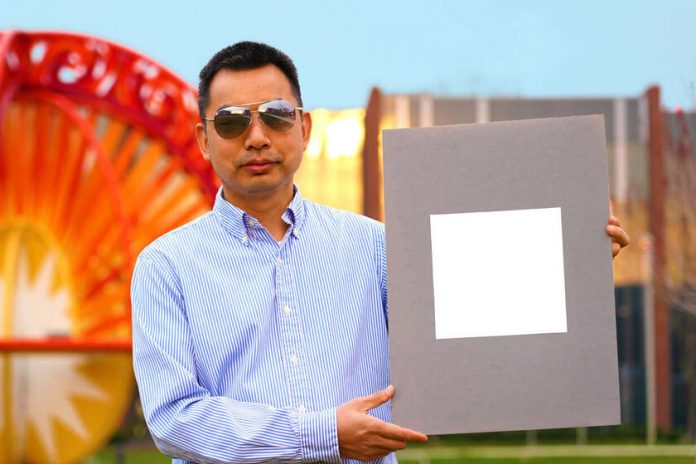 In the image that accompanies this article appears the whitest painting that human beings have ever created. Essentially the opposite paint to Vantablack, which a few years ago claimed to be the blackest black in the world. While the Vantablack absorbs as much light as possible, this new paint reflects as much as possible, 98.1%.

Is about a brainchild of Purdue University engineers. Their progress has been published in a paper in ACS Applied Materials & Interfaces. The objective? Get a paint so white that it reflects as much light as possible so that it is not absorbed by the item it covers.

The painting reflects 98.1% of sunlight and looks like white paint to the naked eye, a very white one. For years they have been researching how to improve the reflectivity of light with a white paint. There is a key difference from other white paints: they use barium sulfate as a pigment instead of titanium dioxide. The reason? It is not that it reflects more light, but rather that it reflects light at more wavelengths.

Reflecting light at different wavelengths is essential for researchers. Barium sulfate makes it possible to reflect, apart from visible and infrared light, also ultraviolet light. With this they get cover the main objective of the project: reflect as much light as possible so that it is not absorbed and thus keep an object at low temperatures. The idea of ​​using white paints to avoid heating objects or buildings is nothing new, not for nothing in the hottest areas of the planet buildings tend to be white.

According to the researchers, using his paint buildings are up to 4.5 ° C cooler on sunny days than using a traditional white paint. With this they say that on hot summer days many will not have to turn on the air conditioning, perhaps on the most extreme days, but it will still be used less than in a building covered with traditional paint.

The paint is actually not entirely new. In 2020 they managed to launch a version in which the reflectivity was 95.5%. This time its reflectivity index rises 2.6%. It remains to be seen if they will achieve the physical limit of 100%, they say they are going for it.

There are challenges in this. On the one hand, there is the difficulty of obtaining the paint, which implies a high cost of production in large quantities right now. On the other hand, they say that currently paint requires a thickness of about 200 microns on surfaces to achieve the desired reflectivity. They hope to reduce that number to something between 50 and 10 microns. Nor should we forget about the durability of the paint in different environmental conditions.

Be that as it may, probably in the next few years we will start to see different paints on the market that promote their high reflectivity as a plus for keeping things cool. A unique idea to combat climate change.