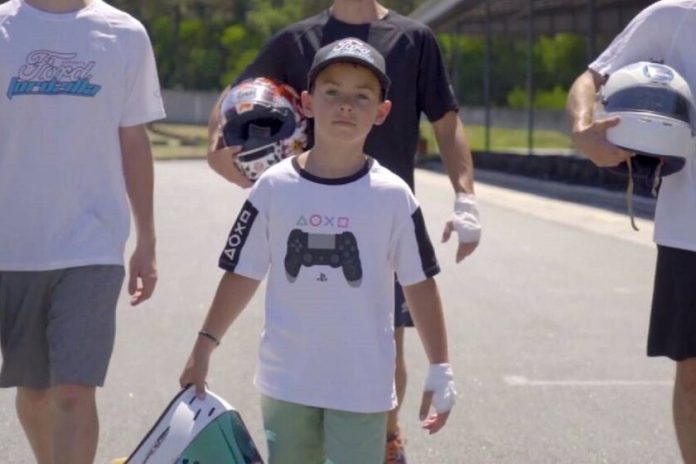 When Fernando Alonso won his first Formula 1 World Championship, televisions quickly broadcast home videos recorded by his family in which he could be seen driving a kart at the age of just 4 years.

Times change, and only the passing of it will tell us where the career of the protagonist of these lines ends, but it is possible that if the memory of the exemplify its precocity is a video from Twitter.

I leave you the video of one of the passes of the #SubidaVirtualaMarin Abel Torres, 8 years old, at the controls of the simulator @JRS_es. Remember his name …. I am not lying when I say that you are going to be freaking out with your mouth open. MENUDO ALIEN 🔝 #simracing #hillclimb pic.twitter.com/7BbOL3RdFh

Abel Torres is the protagonist of the video. A 10-year-old boy from Marín (Pontevedra), who in just over 12 months has gone from playing at home to the video console to competing face-to-face in the Spanish Simulation Championship (CES) or Gran Turismo against rivals who are twice and even triple his age.

“Since he was little, cars and simulation video games caught his attention. At the age of three or four he would sit in a cockpit what do we have at home -a simulated vehicle cockpit- although his feet did not reach the pedals. Over time, I made a wooden one for him, and now here we are ”.

Who speaks is Martín Torres, Abel’s father, that despite having raised his son in an environment where the love of the motor world was present, he did not imagine that his son was going to become one of the greatest young talents in simracing at the age of 10.

In just a year and a half, Abel has gone from playing at home to signing for Ford’s simracing team and competing with adults three times his age.

Today Abel is part of the TeamFordzilla team, Ford’s initiative in the world of simulation and motor esports. An industry that moves hundreds of thousands of views in streaming and in which brands have not wanted to miss the opportunity to be in the starting box.

But Abel’s still short career begins at his parents’ bar.He continues in the main simulation championships in Spain, and who knows if he could continue in physical driving.

“Can I record your son?”

The Twitter video we have seen before was recorded at Abel’s parents bar in April 2019, when I was 8 years old. “A friend suggested we do a little simulation championship at the bar. We did it, and my son took control ”, says the father.

In the bar that day I was Pablo López, Fordzilla professional simracing driver and streamer on Twitch, and asked permission to record Abel’s career. The video, in addition to Twitter, went around the world, and a few months later the Torres family received a call.

“I was really speechless when I saw the video, so I got to work to contact the family and see how we could collaborate”, says José Iglesias, captain and manager of Team Fordzilla in Spain. Iglesias, who lives in Barcelona but is also a native of Galicia, traveled to Marín to meet the boy. From there he left with the commitment to integrate Abel into the team and train it.

“I personally have been linked to the motor world for more than 10 years, first in face-to-face karting and later in simulation, and I have never seen such precociousness. He has an innate ability to draw corners and read what is happening in the race. And we must not forget that he is a 10-year-old boy, ”Iglesias tells Engadget.

A few months later Abel already participated in the Spanish Championship of the video game Assetto Corsa Competizione, winning one of the tests, and during February he beat 800 other drivers in the qualifying test to end up participating in the Spanish Gran Turismo Championship.

“He has an innate ability to draw curves and read what happens in the race. And we must not forget that he is a 10-year-old boy.” José Iglesias, Captain of the Fordzilla team.

There Abel was setting the best fastest lap times in most races, but ended up falling in the standings due to tire wear. “Although he is a prodigy for his age, Abel still does not control as normal for his age to measure things like tire wear well.He also likes to be in direct competition with his rivals and sometimes he tries to overtake that hurts him. But what has been said, he is 10 years old, ”says Iglesias.

Managing a child prodigy in the world of esports 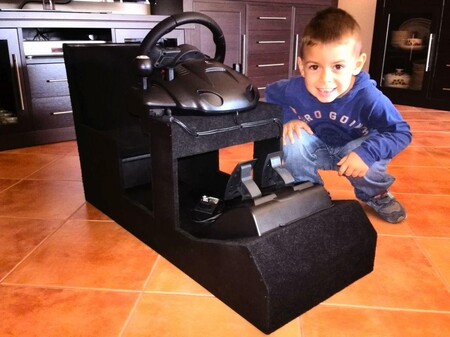 Abel with the cockpit that his father made for him when he was 4 years old.

“I didn’t like not winning but I had a good time”, tells, now yes, the protagonist of this story to Engadget. Talking to Abel is no different than talking to any other child his age. We asked him if at school they asked him about what he was doing, or how he has become known – several television and local media have already come to his house to record it. “It’s not bad, but it’s a bit of a drag when TV comes on,” he says.

“Everything has been in a very natural way,” his father takes up. “His mother and I saw that since he was little he would play on the console or race against me and I thought, well, the boy is good, but to be honest we were never aware that he had so much potential“, account.

José Iglesias delves into the fact that what he has seen with Abel he had not found in his career. “He really has an innate ability. We at Fordzilla work with very young drivers, but Abel’s is unmatched”.

We also asked Iglesias about the relationship with Fordzilla, and how these types of agreements are worked in such precocious cases. “We have a signed agreement with the family, but our focus is on handling the situation in a way that is natural for Abel and does not in any way slow down his development at school. We tell him to train – to play for him – whenever and wherever he wants. We do not set routines for him, and we simply give him support and little advice so that he can progress ”.

Economically, Iglesias says, “there is not an agreement as such for now. What we do at Fordzilla is provide you with all the accessories, accessories and material that you ask for. If you need a steering wheel, a cockpit, we will provide it ”.

Abel himself also has a similar vision, in his own way. “When I get home from school, I do my homework and then play the game that I like the most,” telling us that sus favoritos son Gran Turismo y Assetto Corsa Competizione.

“No, Abel did not start playing Mario Kart or games that may seem more childish. At home we have always played rally and racing games and that is the first thing he had at hand “, says his father, who, about how they combine the new facet of Abel with the normal one of a child of his age, says that” actually We have it very easy because he tells himself that he has to do his homework firstAnd what we are clear about is that we are never going to push him to ‘train’ or play beyond what he wants ”.

READ:  GitLab is one of the largest companies that works completely remotely, and this is what it advises other companies

And from esports… To real competition?

Abel’s early career has marked so far his milestone in the Spanish Grand Prix of Gran Turismo, where despite finishing twelfthIn the last place, he had already set the milestone of being classified among more than 800 applicants in the entrance exams. 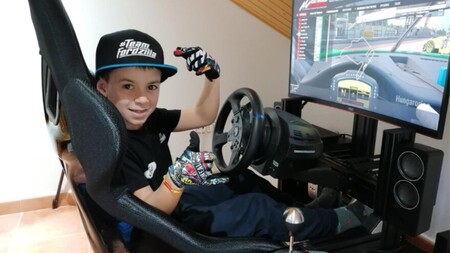 “The plan for Abel is, for now, to communicate to him and his family possible tournaments in which we believe he can participate, and if he feels like it, there we go, but without any pressure,” emphasizes Iglesias.

Of course, the Torres family also begins to cook another aspect, that of Abel being able to start competing in karting. His parents gave him one for communion when he was 8 years old, although until now they had not been able to get too much out of it due to the financial demands of making use of it on the circuit.

“It is an expensive and very demanding sport, so until now we have hardly gone to race at a circuit. But in recent months, whenever the situation (due to the pandemic) has allowed it, we have started going some weekends, ”says the father.

There, on the go-kart circuits, Abel has already begun to attract attention. “One weekend there were two federated children a little older than him, and Abel stood out. Other parents asked me since when did I run. I told them that it was the third time I had played a kart on the track ”, he says.

Iglesias tells us that in a world in which esports have more and more weight, he has come across all kinds of profiles among young kids. “There are people who catch my attention, but surely because we are at another generational level, who completely pass from real driving. They genuinely prefer simulation”. Despite this, there have been cases like that of Víctor Prim, who has gone from esports to testing in rally competitions.

When we asked Abel about what he likes the most, he answers us both. Of course, when we name him if he would like to be a Formula 1 driver, he is also very clear: “If they give me a Formula 1 I will try it!”

Images courtesy of the Abel Torres family and Team Fordzilla.