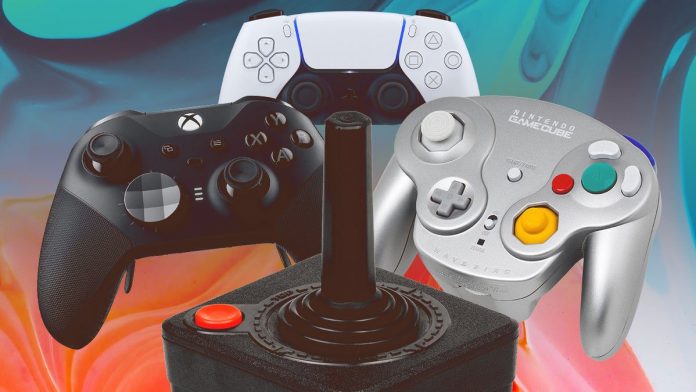 There are a huge number of incredible video games for all platforms, but it is impossible to enjoy them without a controller to match. It can present a great design and groundbreaking ideas, but if the only way we have to interact with its world is not to feel pleasant, the whole experience can be ruined. Fortunately, we’ve been graced with dozens of great options in game controllers from all generations. So we have decided to agree (more or less) to choose the 10 best controls of all history.

To keep you in mind, we decided that gaming peripherals like keyboard and mouse or crazy things like Donkey Kong Bongos didn’t exactly fit into this category, so we’ll keep it specifically for traditional game console controllers. Apologies in advance to Guitar Hero X-plorer.

That which, here you have our selection for the 10 best video game controllers in the entire history of consoles.

Love it or hate it, the Wii Remote made a huge impact on the industry and showed just how much fun it can be to play from day one. At a time when game controllers were minimally changing from one generation to the next, Nintendo designers turned the table upside down. Cozy and simple all the way through, and equipped with an infrared sensor, accelerometer, and gyroscope, the Wiimote opened up the movement to gaming like never before, and made gaming in general a breeze for newcomers to sell. And the proof of concept of how fun and versatile the controller could be we had it with Wii Sports, which perfectly showed how this simple and strange controller could turn into a tennis racket, a golf club, a pair of boxing gloves and much more.

While Nintendo’s NES controller deserves all the credit for ushering in the modern game controller revolution, the rounded and more ergonomic Super Famicom (SNES) took everything that worked and made it better. Gunpei Yokoi’s innovative Game & Watch / NES D-Pad design made a comeback along with the Select and Start buttons, but it was their combination with a diamond-shaped button design along with the triggers that offered versatility never before seen. Games like Super Mario World perfectly utilized the new button configuration to allow players to run and jump at the same time, while the L and R buttons took the lead in racing games like Top Gear, F-Zero, and Mario Kart. In the future this also began to define these triggers as the acceleration / braking standard in speed games.

Nintendo is known for its innovative approach to controllers, and while not all have been successful, Nintendo’s first attempt at a wireless controller became an instant classic. WaveBird for Nintendo GameCube introduced us to a low-latency wireless controller that didn’t try to be more than what it offered: a wireless version of the already excellent GameCube controller, with a bit more weight. Best of all, it didn’t require a continuous viewing connection, so long nights with Super Smash Brothers Melee didn’t get interrupted every time your friend passed in front of the TV. It may not have been the original GameCube controller, but it’s hard to separate our best memories alongside it without using the WaveBird.

Microsoft leveled up with controllers from the early days of Xbox. The bulky and classic “Duke” quickly gave way to the much better Controller S for the original Xbox, but the beloved form that has become the Xbox gold standard arrived in 2005 alongside the Xbox 360. The 360 ​​gamepad instantly became an icon, comfortable to hold in its design and weight and a pleasure to play (what a d-pad marvel), whether it’s taking down enemies in Halo or driving Forza Motorsport. It’s such a good design it’s STILL being replicated – Google’s Stadia Controller, Amazon’s Luna Controller, Nintendo Switch’s Pro Controller, and of course future Xbox controllers that would be built on the basis of what it offered. the 360 ​​Gamepad.

Nintendo is known for making risky plays with its hardware, with a history of standard controls for each console that differs dramatically not only from the competition, but from generation to generation. To make up for that, Pro Controllers have been, over the years, the go-to to deliver an experience similar to Xbox and PlayStation gamepads. They have been getting better and better, culminating in the Switch Pro Controller, which is by far the best version of Pro Controller Nintendo has ever created. It may not be much different than a standard Xbox One controller in terms of its design, but in the way the controller feels in the hands, the Switch Pro Controller is among the best. Impressive battery durability and extraordinary service life only support the choice.

The newest PlayStation controller may be young, but it has already shown the potential of its haptic vibration and adaptive triggers in just a few months. Also linked to becoming one of the most comfortable Sony controllers we have ever owned. While not a massive innovation from the DualShock 4, the textured grip and less obtrusive lighting, along with the split color look, gives the DualSense a sleek and fresh futuristic aesthetic. But haptic vibe is the star of the show, with games like Astro’s Playroom demonstrating their changes to textures, climates, and more features that the controller can simulate. We have also seen other uses, such as each of the Call of Duty weapons feeling a little different when shooting, along with other small sensations such as the roar of a subway car or a text message in your pocket in Marvel’s Spider- Man: Miles Morales. Obviously we’ll have to wait and see if their new tech becomes a fad or something else, but we’ve already been impressed enough to deserve a spot on this list.

From an accessibility standpoint, nothing compares to the Xbox Adaptive Controller. With the ability to customize the position of each input through different peripherals, the XAC gives players with physical disabilities a level of independence unmatched by standard controllers. Each button or joystick, such as those found in the Logitech Adaptive Gaming Kit or the items in the Warfighter Engaged, can be adapted to different levels of force, precision, and endurance. Whether it’s for Xbox or PC, this adaptive controller creates an inclusive gaming environment for people with physical disabilities and is a huge step forward in ensuring that games are accessible to everyone. The way to follow.

Before we get to the bottom three, we wanted to acknowledge who may not be the “best” managers of all time, but they are some of our favorites. First up is The Duke for the original Xbox, which may not have been the most comfortable or attractive controller out there, but its large and robust size has earned the love of the community. There is the PS1 controller “Taste the Pain” that was released together with Wu Tang: Shaolin Style. It was the best design of all time, even if it sucked to play.

We should also mention HORI’s Dragon Quest Slime controller. One of the wildest designs came when Capcom wondered “What if we took over the GameCube and turned it into a CHAINSAW for Resident Evil 4?” And who could forget the most underrated design of Nyko’s AirFlow for the GameCube, which had a built-in air conditioner to keep your palms from sweating.

The DualShock 4 is the culmination, and without a doubt the best, iteration of the PlayStation family of controllers. After the clunky PS3 switch to the SixAxis and its swift return to the DualShock 3, the fourth-gen controller nailed it early on. With better weight and grip, the DualShock 4 moved away from some of the more prominent edges of previous DualShocks and, most importantly, made hand grips that were longer and more comfortable to hold. With great triggers after many disappointing generations, especially compared to its direct competition, the DualShock 4 will be remembered for offering Sony’s ultimate controller design.

READ:  When Will Lab Rats Season 5 Be On Netflix

Sony has never released a PlayStation controller equivalent to Microsoft’s work with Xbox Elite, so those looking for a more premium control experience on PS4 had to turn to third-party companies like Scuf and Astro. The best of them is the Astro C40 TR, it offers a solid build with professional features like re-assignable rear buttons, trigger stops, and most notably interchangeable components. Not only can you customize the length and shape of the thumbsticks dome (and replace them if they wear out), but the thumbstick and D-pad can be completely changed, allowing you to choose between the traditional PlayStation online style or the Xbox’s own design. The only flaw with the C40 TR is that it was released in 2019, near the end of the PS4’s lifespan, and Sony’s restriction on third-party controllers means that it is unfortunately incompatible with PS5 games. We can only hope that a full PS5 version with DualSense-like haptic vibration and adaptive gaskets is on the way, because the C40 TR has made a notable impact despite its short life.

Here is the best video game controller ever. Microsoft’s second attempt at a high-end gamepad crushes the first thanks to a long-lasting internal rechargeable battery, textured triggers and grip handles, and a much-needed fix for some annoying issues from the first Elite controller, which itself already it offered a great way to play. So it not only improves on the Elite Series 1, but also outperforms any other controller with its rich feature set, comfortable feel, and robust design in every way. Concave joysticks, an impressive d-pad, adjustable triggers, tons of customization, and much more add to making the Xbox Elite Series 2 the undisputed king of gaming controllers.

And that’s all! These are the 10 best controllers in the history of video gamesfrom some of the most impressive original designs to the most modern and stylish controllers on offer today. Did we leave any of your favorites off the list? Let us know!