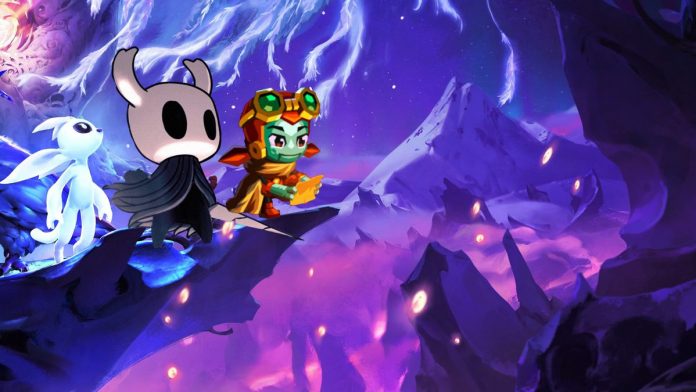 The genre of “platform exploration” or “platform adventures” or, as we all call them by now, Metroidvania. This genre has flourished over the last decade and has spawned some incredible 2D games, several of which could rival the fathers of this denomination. But for this list we wanted to leave Samus and Alucard out, so we could choose the best Metroidvanias ever without any Metroid or Castlevania listed. With this in mind, let’s take a look at our personal selection, put to consensus by the writing team.

With Xbox Live Arcade in 2009, Shadow Complex was the right game at the right time to reinvigorate the Metroidvania genre. An excellent blend of sci-fi action with a compelling story, satisfying progression, and 2.5-D perspective, delivering one of the best aesthetics we’ve seen in the genre to date. It was a refreshing update on a beloved playstyle that, in 2009 at least, seemed to have fallen out of favor with developers and the general public. It would become one of the best-selling Xbox Live Arcade games of all time, and a remastered version made its way to PC and consoles years later.

Blasphemous introduces you to the sprawling and hauntingly beautiful Cvstodia, a 16-bit world packed with secrets in every corner. Despite its beauty, it is also a world overrun with truly horrible and difficult bosses blocking your way. And to make things more complicated and ultimately more rewarding, Blasphemous torments players with items and upgrades that are often out of reach. These are almost always accompanied by a dormant part of the environment that becomes instantly recognizable, prompting you to seek a way to turn roots into bridges or paths of blood into platforms. The quest to uncover these environmentally transforming relics is almost as fascinating as progressing through the main Blasphemous story, ensuring that you rarely want to leave a stone unturned as you explore one of the genre’s most memorable lands.

Just like olive oil and ice cream are somehow an oddly complementary duo, Yoku’s Island Express combines two wildly different game flavors to create something totally unique. Yoku takes the complexity of a Metroidvania and applies it to the rigid structure of pinball. It forces players to rethink everything they know about platforming, with movement a combination of familiar 2D navigation and pinball elements. It makes that amazing mix work beautifully in an amazing video game.

The icing on this strange mix of genres is his approach: we are the new postman of a small tropical island and, mainly, we are there to deliver mail. The hand-painted art style, clever writing, and upbeat melodies keep you smiling as you develop your skills to advance in the unexpected but memorable world of Yoku.

READ:  I See What You Did There?

Cave Story was created by a single developer, Daisuke “Pixel” Amaya. It is worth mentioning because Cave Story is a huge achievement, with an expanding world, a fascinating story, and characters that are impossible not to love. Unique weapons and a world that is filled to the brim with creativity, every part of Cave Story feels made with care and love. But don’t let the cute cast fool you, because Cave Story will break your heart and mend it when the journey is over. Decades later, Cave Story still feels like a treasure. It’s easy to download and play today and at an unbeatable price.

It’s no wonder fans have been so eagerly awaiting Axiom Verge 2, given the skill with which Axiom Verge presents itself as a love letter to the Metroidvanias of the past. Designed by a single developer, the adventure provides players with an inventive arsenal of weapons and abilities. But this throwback never feels dated as you drill, teleport, and pixel-nuke throughout your adventure in the alien world of Sudra. Combine that with a fantastic sense of progression that makes going back and discovering new areas a constant joy, and an intriguing and mysterious plot. Axiom Verge is easily one of the best Metroidvanias out there. It may be inspired by games released years ago, but it may be among the best of that era or any other.

Steamworld Dig 2 isn’t the only Metroidvania on this list sending you exploring underground. That digging game loop is a blast though – drill as much as you can, head back to town to collect resources, upgrade your gear, and you’ll be (happily) ready to do it again. It’s so satisfying that it’s easy to slip into the “just one more lap” mentality and end up all night. The controls are so finely tuned that any movement in the caves is smooth and enjoyable, as is the act of mining in the game. We added some optional puzzle rooms with rewards and Steamworld Dig 2 turns into a Metroidvania you don’t want to rebury.

4. Bloodstained: Ritual of the Night

Bloodstained: Ritual of the Night is the closest we get to cheating on the no-Castlevania rule, but it’s too good an experience to ignore. Koji Igarashi, father of the genre, set out to make a new game in the vein of the most beloved Castlevania, and by Dracula he succeeded. This kickstarter success story takes elements from all the great Castlevania games and combines them in one place. Utilize the Symphony of the Night gear system with quality of life changes – meaning the menu isn’t horrible – the shard system that lets you take on enemies’ magical abilities a la Aria / Dawn of Sorrow , and more. Add in the option to play as a completely different character after completing it, tons of hidden content, and a host of other intriguing inclusions – Bloodstained: Ritual of the Night taps into that special late-90s / early-2000s era of Castlevania that is loved by many for creating something interesting in her own right.

Guacamelee 2 improves on almost every aspect of the original work, expanding on what worked with new abilities, a ridiculous new meta-story, and a delightful Metroidvania from start to finish.

What makes Guacamelee 2 so smart is its combination of level design and platforming. Basically, all your actions, from the uppercuts that propel you upwards to the lateral lunges, work in two aspects: the combination of the correct attacks against certain enemies is essential to rack up combos and survive the combat sections, but all those movements They are also required to carry out the platform sections. And as you explore the world of Guacamelee 2, discovering more of its map as Juan the Fighter or Juan the Chicken, don’t ignore the optional side challenges you’ll come across: they are some of the toughest but most incredible in Guacamelee 2.

Add in a new hook skill, unlockable skill trees that encourage you to explore more of its wonderful and vibrant world, and some genuinely funny stories, and Guacamelee 2 can make you cry with laughter and despair in its most difficult phases.

2. Ori and the Will of the Wisps

Any of Ori’s games could have landed comfortably on the list, but the sequel, Will of the Wisps, takes an impressive gameplay and makes it more robust. No other series looks or sounds like Ori, with a beautiful world filled with vibrant landscapes and strange creatures complemented by some of the best musical pieces in the industry. Flowing through those areas with your diverse set of movement skills can almost become Zen practice.

READ:  A fan builds the Nintendo office in the 19th century to store his collection

Will of the Wisps elevates all of the aspects that made the first game great, in part by borrowing some ideas from the first game on this list. The introduction of equippable items to enhance your preferred play style and a lovable little town for you to grow up full of friendly faces adds more layers and nuances to the world and your character. Their combat is also more developed, along with an even grander and more ambitious story than the original. Ori stands out from what most people usually imagine when they think of a Metroidvania thanks to his warm and welcoming look, but it’s that unique take on a well-explored genre that makes him stand out above the rest. Well, except one.

But before we get to number one, we want to give a quick honorable mention to Batman Arkham Asylum, a game that, depending on the definition of Metroidvania, could technically make the list. We decided to limit things to 2D Metroidvanias but felt it was important to show some respect for what is arguably one of the best examples of how this genre works in 3D space. And with that, we go to the top spot.

Even including Castlevania and Metroid games on the list, Hollow Knight would probably be pretty close to the top. It’s a Metroidvania that takes influence and inspiration from many other works but combines those concepts with countless new ideas of its own to make something truly incredible. And it’s the combination of all those individual parts that makes the whole so much more impressive: its charming hand-drawn art style, haunting soundtrack, flexible combat systems, satisfying movement mechanics, and mysterious catacombs. .and we could go on.

Hollow Knight is full of decisions, from choosing to go left or right first, to deciding whether or not to challenge an imposing optional boss, to figuring out which of his deluge of enchantments he should use to tweak his playstyle. As a result, its exploration and unlocks feel personal, providing a natural sense of progression to its meticulously laid out hallways. And don’t let the appearance of its little bugs fool you – the world of Hollow Knight is a sprawling underground maze that gives you enough paths to pursue and creative enemies to fight to keep you exploring for dozens of hours. Hollow Knight is without a doubt a modern classic.