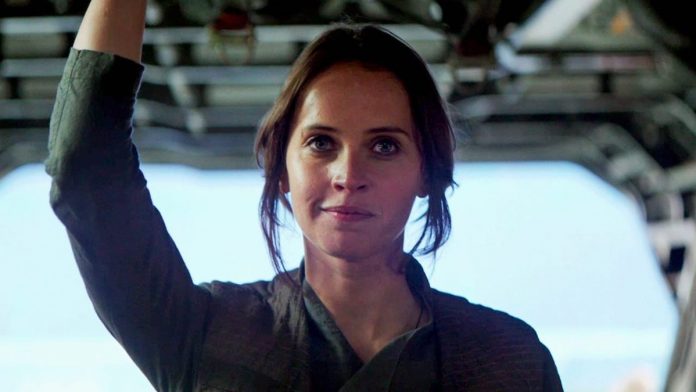 The first draft of Rogue One: A Star Wars Story has been revealed and features several moments that were not included in the film, such as a scene showing the nerf being grazed in the middle of a desolate landscape.

The point is that writer Gary Whitta took to social media this week to detail a nerf scene that was originally included in the Rogue One script. This retweeted a series of storyboard panels del artista Matt Allsop, who had shared a “fragment” of the hundreds of frames you illustrated for the indie Star Wars movie.

“That first page of the storyboard panels is from my first draft”confirmed Whitta, who collaborated with director Gareth Edwards on 2016’s Rogue One. “Where Jyn led a rebel commando team to Edu (later rewritten as Eadu), andThe planet where the Empire was building part of the Death Star. Yeah, those are nerfs, and they were being herded away! “.

That first page of storyboard panels is from my first draft, wherein Jyn led a rebel commando team to Edu (later re-spelled as Eadu), the planet where the Empire was building part of the Death Star. Yes, those are nerfs, and they were being herded! https://t.co/DyFbAkBqur

As you can see, that black and white frame shows members of the nerf species gathering on the planet Eadu, struck by the storm, located in the Outer Rim Territories. As a last resort, the scene did not end up appearing in the movie, but luckily, a cocky, half-witty, and scruffy-looking nerf shepherd, became a very popular face in the Star Wars saga.

READ:  Peacock Has Cancelled The Renewal Of Dan Brown’s The Lost Symbol

Moreover, we are ready to enjoy more events surrounding Rogue One in the upcoming Star Wars: Andor series, coming directly to Disney + in 2022. At the moment it is confirmed that the series will take place five years before the events of Rogue One and will follow Cassian Andor’s role in the growing Rebel Alliance.

Diego Luna resumes his role as the morally conflictive rebel agent for the Rogue One spinoff series, alongside a star-studded ensemble: Stellan Skarsgård, Adria Arjona, Fiona Shaw, Denise Gough, Kyle Soller and Genevieve O’Reilly as Mon Mothma. The series creator, Tony Gilroy, is also said to have a plan for K-2SO, but not until after the first season.

Andor is a a growing list of Star Wars content on Disney, including upcoming spin-offs from The Mandalorian: Ahsoka and Star Wars: Rangers of the New Republic, along with Star Wars: Obi-Wan Kenobi, starring Ewan McGregor and Hayden Christensen. There is also a High Republic series called Acolyte, a Star Wars: Visions anime, and Star Wars: The Bad Remittance, coming to Disney + on May 4, 2021.