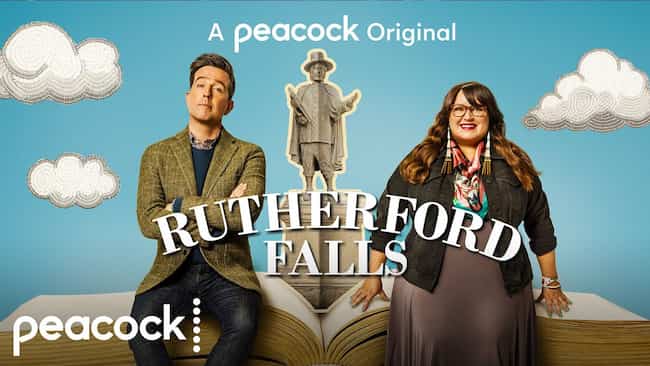 Rutherford is an American comedy-drama created by Ed Helms, Michael Schur, and Sierra Teller Ornelas. It was released on Peacock on 22nd April 2021 and had 10 episodes. Ed Helms is a comedian, writer, producer, and actor. Do you remember the paper salesman from ‘The office’ sitcom? Yes, he is the one performing the character. Michael Schur is a writer and actor. He was the writer and producer of ‘The office’ and not only that, he co-created ‘Brooklyn Nine-Nine’. Both are the top famous series of all time. Sierra Teller Ornelas was part of the writers and productions team of ‘Brooklyn Nine-Nine’.
She has also contributed to ‘This American Life’ and ‘The Newyork Times.’ So the creator team seems really proficient and has done noticeable work in the field of sitcoms. 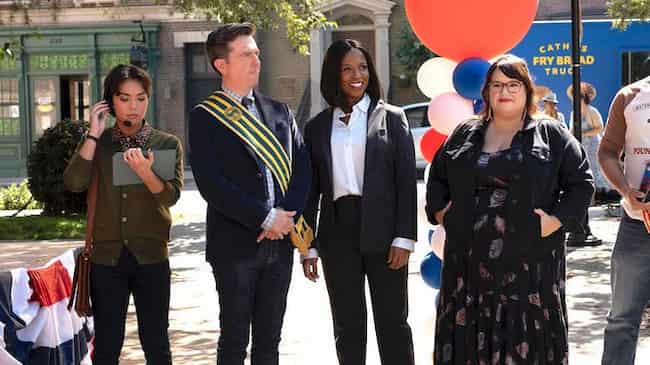 The drama starts with Mayor Chisenhall wanting to remove the ‘Big Larry’ Statue. However, Nathan is really very angry at such a decision of removing the statute of his ancestor.
Reagan a childhood friend of Nathan first agrees to support him on his decision of saving the statue, however, changes her mind afterward. She tries to convince him to move the statue to the town history museum that he himself owns. Instead of solving the things, he ends up fighting with townpeople at the gathering and claims that he will keep the statue at the same place at any cost.

Regan works at Casino and asks her boss to allocate his profits to the Minishonka cultural center, however gets refused. Her boss informs her about his plan to start “Running Lightning” and informs her about the decision to involve her in the initiative. He was not planning to launch it anytime soon until he saw Nathan’s angry speech. Now he immediately wants to start it.

Nathan gives an interview for the podcast of the prof. Tobias Kaufman, who is writing a book on Rutherfords. The purpose of the podcast was to make people aware of the importance of the statue. However, the professor added some resist comments and posted them against the will of Nathan. Now Rutherford Inc. is working on taking the video down.

On the other hand, Regan seeks support from the community for her cultural center and Terry takes her to meet community members. Terry asks her to convince members to give him support and the same happens. Community members are all set to support him and sue Nathan.

Nathan goes to Duz’s house for the birthday celebration of aunt Ida. It’s her 90th birthday! However, Nathan gets disappointed when he gets to know that Duz is selling that home. Duz clearly refuses Nathan’s idea of not selling and asks him not to too much idealize Rutherfords.

While Regan and Bobby were taking care of the museum, a reporter name Josh arrives from New York City. He finds the statue worth his story, but Regan tells him there is nothing interesting to make a story for. After missing his train, he stays with Regan and both develop bonding. Nathan speaks in front of both that he is being sued by Minishonka Nation.

Josh goes to Terry asking some hard-core questions for the interview. Offended as he is, shuts the recorder telling him money is the only power and not culture. Nathan comes to Terry and gets a hard-hitting conversation. He warns Terry that Rutherford Inc will come after them. According to Terry rutherfords own $350 million to Minishonka.
After having a secret meeting with the board he wants to add Rutherford Inc to the lawsuit too!

At an event Mayor Chisenhall and Terry get buttheads. This happened because she had rented Airbnb property from Terry and gave a bad review, causing him to lose the status of the super host. After a while, they realize they are both in power and decided to co-operate with each other instead of fighting. However, she still does not trust him completely and asks her secretary to set a squash game between them.

Regan is bullied by Wayne and Sally and to confront them, she asks them about what good they have done till today? To the reply they donate to Regan for the cultural center which she later realizes is total junk. Josh helps her sort all the items where Regan realizes some of them can be actually used. Terry’s daughter also donates her beadwork and Regan re-holds the opening of the cultural center.

Getting back to the lawsuit, Rutherford Inc. sends a young lawyer asking Terry to settle in $3 million, and contrary to that Terry asks for $300 million. Later Nathan and Terry meet at a restaurant and behave nicely contrary to the ongoing situations.

Just before Terry’s deadline, a helicopter of Rutherford Inc lands at casino parking!

To settle for a lawsuit, Terry demands back some of the lands, including the land on which Nathan’s museum/house is set. If the lawyers do not agree to it, he will publish a podcast of prof Kaufman.

At the cultural center, an old lady appreciates Regan by telling her she is proud. It really makes Regan’s day.

Nathan and Regan are now on a mission to save his home. They try to dig up some information from aunt Joan’s house but find nothing worth it except for the cabinet of Minishonka cultural artifacts.

Kaitlyn tells Nathan that he would have to take Terry’s deal to which Nathan does not much agree. Later, encouraged by Josh, Regan informs Nathan that she wants to ask her aunt to give back the Minishonka collection. He gets offended thinking everyone is behind his house and refuses to help her.

Regan is now ready to work with Terry in return for big money for her cultural center. Mayor has changed her thoughts and is now against Terry and informs him that he shall not be taking up the town’s land.

Regan is now declared associate directorate of the casino. The mayor approaches Nathan and tells him that she agrees on keeping the statue at a place only with the purpose of not signing off the town’s land to Terry. Nathan gives the council a speech and they temporarily get convinced upon keeping the statue. At Nathan’s house, he and the mayor celebrate victory and ends up having sex.

Unexpectedly, the next morning he notices that there is something written on the statue in Minishonka’s writing. A lady translates it and tells him that it is a warning not to trust the legendary monster. Hence explaining that Big Larry was a monster to the Minishonka people.

Four people – Nathan, Regan, Terry, and Mayor meet and decide to create a village-like 17th century similar to that of Colonial Williamsburg. According to Regan, Nathan would be happy getting to keep the heritage of his ancestors. However, contrary to that, he gets angry because he thinks even after giving up his land he will have to live according to Terry’s conditions.

The last-second episode i.e. 9th episode reveals surprising facts. While searching into artifacts of Joan, they find love letters through which the fact that Nathan is not actually a Rutherford descendent. Josh is excited to report it but Regan refuses him to do so and he does it anyway. It causes the end of their relationship. . Regan informs the same Nathan to which he does not agree. Later his brother Duz tells him the truth making Nathan sad. He wants to close down the museum and leave town forever and even tries to bring down the statue by hitting it with a car but the bumper falls off.

Nathan wanders around in America looking for answers about his identity and D’Angelo family. Later he becomes “honorary D’Angelo” for an eating challenge.

At rutherford falls, Regan ends up in controversy for being in the position of manager of the new cultural center as she is not well aware of Minishonka’s language and is also friends with Josh. Later on with Bobby and Terry’s help, she manages to host a live video and convey her points.

Later Nathan and Regan make up after he calls. However, he wishes to stay on the road for a while and listens to josh’s podcast calling him “hopeless roo”.

Sounds like a feel-good story right? A refreshing genre after a long time. In the era where OTT platforms are filled with Violence, Romance, and teenage crimes, this simple light comedy-drama steals hearts. It got a 94% rating on rotten tomatoes.

Peacock has already renewed season two and we can expect it to release somewhere in the middle of 2022. Let’s see what happens to Nathan and ‘Rutherford falls’ town.

Let us know your reviews of season 1 and expectations from season 2 in the comment section.