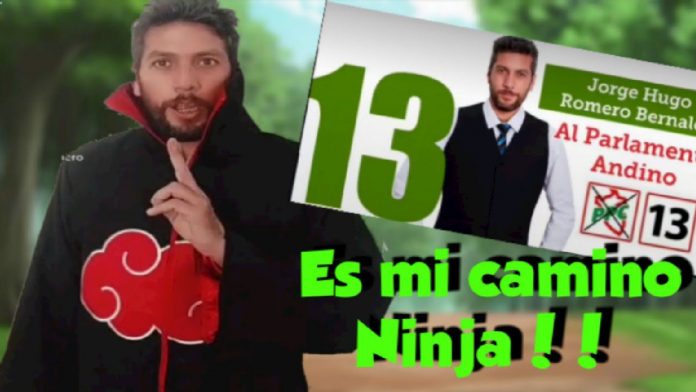 The appreciation for anime and manga is growing more and more, which have now become an integral part of pop culture not only in Japan but also in the West. Everything is also re-proposed in anime sauce such as the clash between Biden and Trump. In Peru in recent days, two politicians have caused a sensation for the Naruto and Evangelion themed campaigns.

In recent times, the Peruvian politician Jorge Hugo Romero, together with his colleague Milagros Juarez, has particularly distinguished himself for a strategy applied in the electoral campaign and which focused on obtaining votes from a particular class of people: the otaku. Their goal is get the votes of these people by taking advantage of the cosplay of anime and manga characters.

Romero, a member of the PPC, has worn over some promotional videos the black cloak with red clouds of Naruto’s Akatsuki, which according to him, being “renegade ninja”, are well suited to the struggle that the PPC wants to carry out against the corrupt forces that have caused suffering and war in the country in recent years. The politician had his “ninja path” in mind for a long time, long before he entered politics, and now his desire is to create a shinobi alliance in parliament.

READ:  The trailer of Anime She Ra Season 5 Launched

Milagros Juarez, a candidate with the UPP party, also caused a sensation thanks to the videos on TikTok where she was cosplay of Asuka singing A Cruel Angel’s Thesis, la nota opening dell’anime di Neon Genesis Evangelion.

In the US, however, a politician has railed against souls for some university lessons.