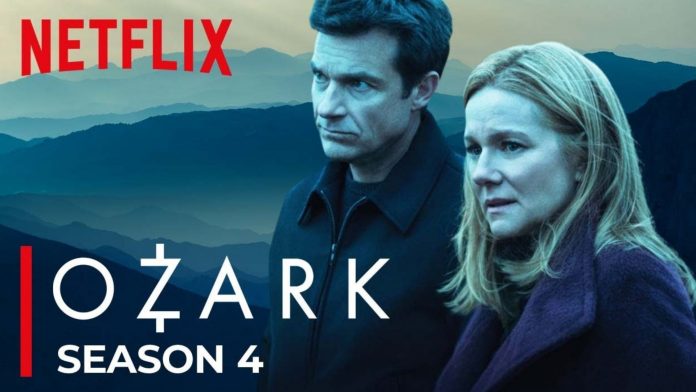 Fans of the famous crime drama Ozark were too impatient for the arrival of the fourth season.  Now that it is coming back, we couldn’t be more curious about what’s to come. With the upcoming release of season 4, Ozark seems to have a lot to expose and we are here to cover the details.

If there’s anything for sure, it is that the Byrde family’s laundry business had been almost swept up if they hadn’t been clever enough through all the seasons.

The trailer which came out in September 2021, showed us that Marty, played by Jason Bateman, and Wendy, played by Laura Linney, are cleaning of bloodstains following Helen’s murder. However, the full-length trailer which premiered recently has more dark drama brewing up.

The cast of Ozark season 4

As of now, it is confirmed that the familiar cast from Ozark season 3 is returning for the upcoming season. So, let us take a look at them.

The finale of the third season concluded with Marty and Wendy working ever so closely with the infamous criminal, Omar Navarro. It definitely was the beginning of a new alliance between the three. Especially that the Byrdes had helped Navarro bring down the Lagunas and end gang wars.

The fourth season of Ozark can bring about all the pending mysteries to be uncovered. We will probably see Ruth avoiding any relations with the Byrde family. Furthermore, will Wendy let Ben die? How will the family react to the circumstances?

Ozark Season 4 has a lot to reveal as there is a long list of storylines to catch up with. Given that season 4 is going to be the final season, fans can expect too many possibilities along the way. Moreover, viewers also have interesting theories about it.

Netflix has announced that the fourth season of Ozark is going to be split into two parts including seven episodes each.

READ:  What Does WBU Mean?

As confirmed by the team and the streaming platform, this is going to be the concluding season for Ozark. The first part is announced to release on 21st January 2022.

Given that Ozark season 4 is the last season for the crime series, fans would be a little disappointed. However, to the cast, it makes perfect sense the show is ending with a season 4.

So, will 14 episodes do justice to the storyline of season 4? We have to see the results for ourselves. So, stick around for further updates on Ozark season 4.