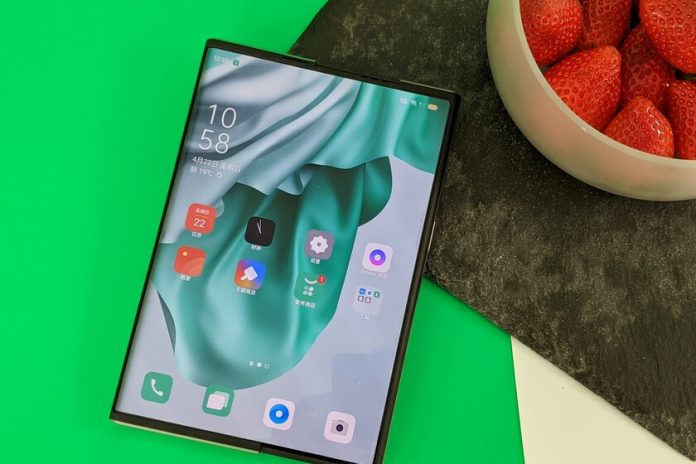 We have tested the OPPO X 2021, the first mobile with extendable screen. A device that for the moment is still a prototype, but fully functional and predictably very close to the final model. An OPPO X that, as confirmed by the company to Engadget during a demonstration event, will arrive in Spain during the second half of 2021.

Presented during the OPPO Inno Day, we are facing a mobile with a screen capable of extending to become a small tablet. A mobile that uses a panel OLED enrollable similar to the one offered by LG or TCL and offering a solid alternative to foldable devices like the Galaxy Z Fold or the Mate X. With one important difference: instead of bending, the screen extends. Y the result is very convincing. 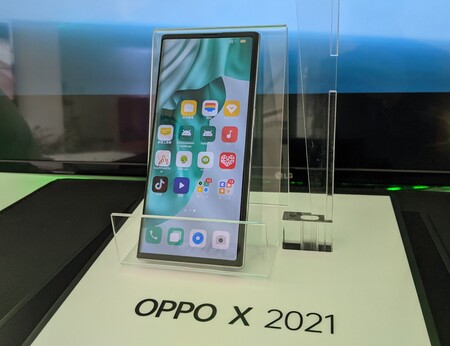 At first glance, it is almost impossible to differentiate a mobile with an extendable screen from a normal one.

The most striking thing about the OPPO X 2021 is perhaps that it does not attract so much attention. At first glance it would be easy to confuse it with any other mobile high-end. We have a 6.7-inch screen, a panel without ‘notch’ and an elongated body that does not reveal any hinge or discordant element.

The feeling of robustness that the OPPO X 2021 offers is excellent and that is its great asset. It is a prototype, with the original software and where not all cameras have been incorporated. We also don’t know some of the final specs like the processor or memory. However, what is the mobile itself and the extension mechanism seem fully functional. 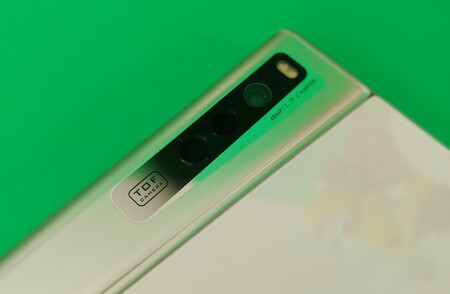 We have had the opportunity to test it for a while and the idea that it leaves us is that a priori we are facing a classic OPPO mobile, with a relatively continuous body, some design elements such as a diagonal rear strip and a fully integrated camera module. on the body, with a vertical arrangement of the cameras and the presence of a ToF camera.

Contrary to folding mobiles where we usually have a book format and a secondary screen, in this OPPO X 2021 we have a more traditional look, with a clean cover and a compact body. This is relevant, because neither the weight nor the thickness are above the usual. 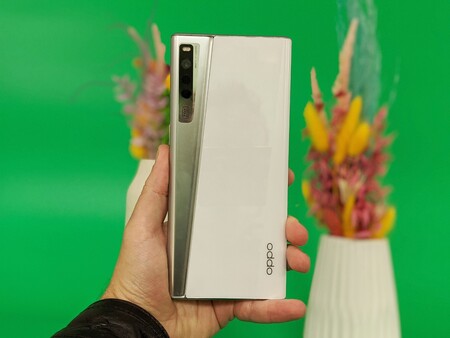 The on / off button is on the side, the speakers are on the bottom edge, and the USB C port is located in the lower left corner, surrounded by a bright green border that gives it an aesthetic touch.

We do not know what connectivity it will bring, since the brand continues to explain that it is a prototype and does not want to reveal the final specifications. 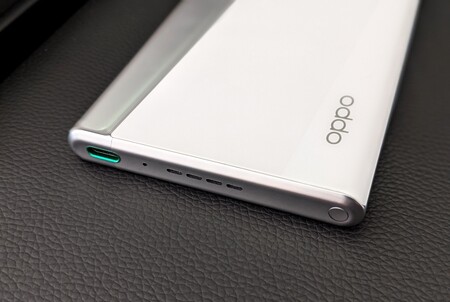 Given this, one may wonder: And how is the screen extension activated? Is there a button? Is it done by force? The proposal that OPPO gives us is that to display the screen we must make a gesture on the right side edge.

It is a subtle movement, which at first is difficult to catch the touch since you have to make a slight pressure on the side to detect it. The gesture is made from the off button, sliding up to extend the screen and sliding down to contract it. In this prototype, the gesture only worked with unlocked phone.

READ:  How Is Fixed Wireless Compared to Fiber at Home?

The mechanism of extension of the screen is done by means of a gesture on the side. It works well, there are no strange creaks and the feeling of robustness is maintained once deployed. Despite being a prototype, the mobile was fully functional.

Once the gesture is done, an internal mechanism is automatically activated which gradually extends the screen in a few seconds. OPPO explains that inside the device there are two motors that stretch the body. This, together with the flexible panel, allows the mobile to be extended to a larger size. 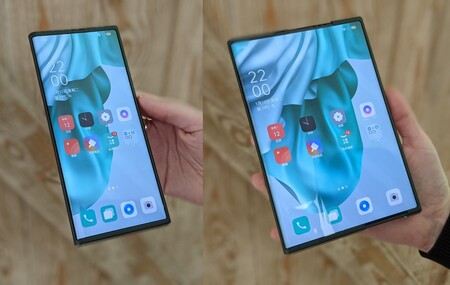 The mechanism allows the panel to be extended from 6.7 to 7.4 inches. Going from a screen with a format close to 20: 9, to a more square format, similar to 4: 3. The chosen panel is a soft OLED, manufactured by BOE.

The extendable screen (up to 7.4 “) offers a similar feel to the folding ones, although with a size and image quality one notch lower.

The flex panel works well and the extension is done gradually, although here are some areas that could be improved. At the moment it is a prototype and the final version could improve, but it is true that On a purely image quality level, the screen of this OPPO X 2021 is one step below of other OLED panels, mainly in terms of color and brightness.

It is too early to make a comparison, so this point will surely change between now and the second half of the year. Yes the proportions will be maintained and at this point, we would have liked to get an extra point in size. We are facing a relatively large mobile, but with the extension a much larger panel is not achieved. Yes, the difference is clearly noticeable and it is much more pleasant when reading or watching videos. But for asking, we would have liked the extension to be longer. 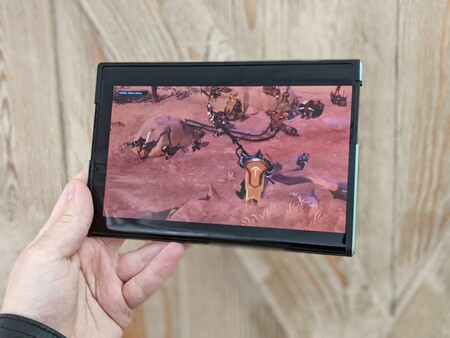 As an advantage of its size is the usability and stability. Despite being extended, the mobile transmits the same sensations of robustness and rigidity. The body does not shake, there are no strange sounds and the mechanism works smoothly. It is precisely the great asset of these extendable mobiles: the promise of reliability. Something that contrasts with the hinge of folding mobiles, which in the first generations gave enough problems.

As OPPO explains, the device is prepared for 100,000 expansions and contractions, with an expected life of 5.5 years with average use.

The extension mechanism of the OPPO X 2021 is based on three technologies. On the one hand we have Roll Motor; the two motors that push the internal body to extend the screen. On the other we have a plaque next to a 6.8mm center shaft and finally the ‘Warp Track’ screen that moves through the fixed rails at the top and bottom. 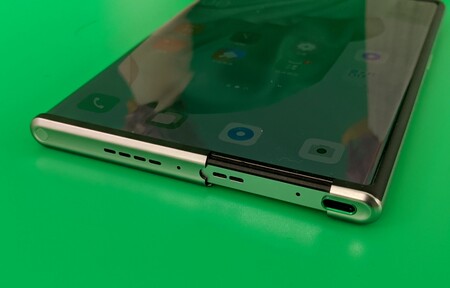 With the extended screen, one of the elements that we do not miss is the fold of the folding mobiles. While in the latter there is a noticeable line that marks the fold, in the extensible ones it is very difficult to differentiate where the original size is. On OPPO X 2021 all the extendable screen is the same, no crease, bumps or marks.

The great advantage is that the panel is an all-in-one, without folds, bulges or marks.

During the time that we have been testing it, only when the panel is extended is it possible to see the mark of the rolling axle. An extension that occurs quickly and without seeming forced. In addition, it has an advantage over folding: during the extension it is still possible to view the content or read a page, since software and content are gradually enlarged. This is not the case with folding, where the transition from closed to open is more abrupt by its own design. 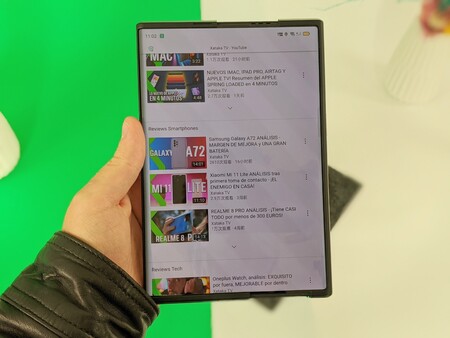 One of the sections where OPPO should be more vigilant is the hinge, which is visible when the mobile is extended. There it is possible that dust accumulates or enters water. At the moment they have not informed us that it will have IP resistance certification.

The prototype of the OPPO X 2021 has left us a good taste in our mouths at the construction level, although some elements were not present, such as the front camera or the volume keys.

These formats open up many possibilities in the software

Unfortunately, the OPPO X 2021 that we have tested had a Chinese software, clearly unfinished. We will have a version of the ColorOS interface, where the company explains that it will be adapted to this extensible screen and, for example, the menus will offer more columns when the screen is large and the split screen will be allowed. It is something we have seen on other devices or tablets. It will have to be tested when it reaches the final version, but at the moment this adaptability was not present.

It remains to be known what processor it will carry, what RAM memory and what components will be used, although the brand already warns us that it will be located in the premium segment, rivaling in characteristics with its other high-end products such as the OPPO Find X3. 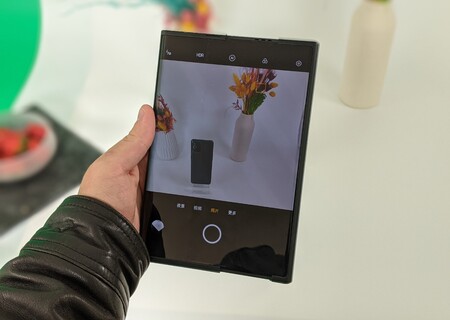 When deployed, the applications fill the entire screen. Black stripes still appear in some of them, but once the software is adapted, the full size of the panel can be better utilized. We have been able to watch some videos, open calendar applications and move through the different menus. In all of them the sensation with the extended screen was much better. A similar feel to that of folding phones.

OPPO confirms that flexible screens have a life beyond folding 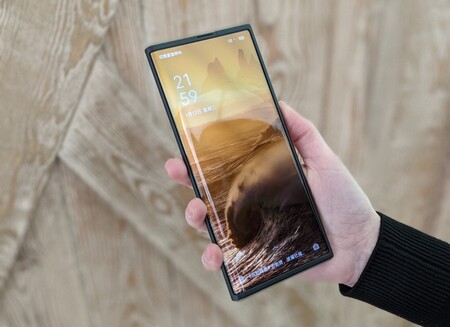 Having more screen in the same size is interesting. It is the promise of folding mobiles and now also of extendable ones. The OPPO X 2021 is the first mobile that shows us these extendable screens, but after trying it for a few hours it is as if they have been with us all our lives. The feeling that remains after trying it is that it is a technology with a long history.

We are facing an innovative mobile, with a solid and striking design. It will not be economical, but the OPPO X 2021 is presented as a serious alternative to folding such as the Fold or the Mate X.

The OPPO X 2021 is a prototype, but profiling the software and adding some elements it would pass perfectly for a commercial mobile. A mobile that is predictably above a thousand euros due to its technology, but that offers a very good user experience. In favor of the folding is that the resulting screen is larger, but these extenders hardly sacrifice dimensions or weight. It is a more conservative solution, but in practice it offers a similar result.

The doubts with this mobile are not so much in the format, which we do believe has a lot of potential, but in the current technology that allows it. This is a prototype, okay, but for example panel image quality was lower than expected. It was not glass and it was below what the best panels offer. It will be necessary to see if for the second half of the year enough has been improved here. 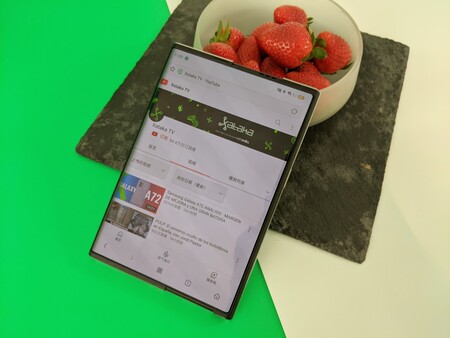 At the level of usability, the OPPO X 2021 is very comfortable. Its weight is adequate for the size and the gesture, although it could improve in precision, it is simple and practical. Perhaps something difficult to do when we hold the mobile with one hand, but it seems like an interesting solution. What’s more, the fact that the image is not interrupted when the mobile expands is a success.

The OPPO X 2021 is the first mobile with an extendable screen that we tested, but the result is so convincing that we would not be surprised if this technology spreads quickly.

Coupled with the fact that the feeling of robustness is very present, it makes us think that extendable mobiles will quickly position themselves as an alternative to folding ones. With its own advantages and disadvantages, but also as an innovative format that once again awakens interest in a sector, that of smartphones, which needs to offer something new if it wants to continue charging exclusive prices.

In Engadget | “The difficulty of semiconductor manufacturers to meet demand is a challenge for the entire industry”, Maggie Xue, President of OPPO