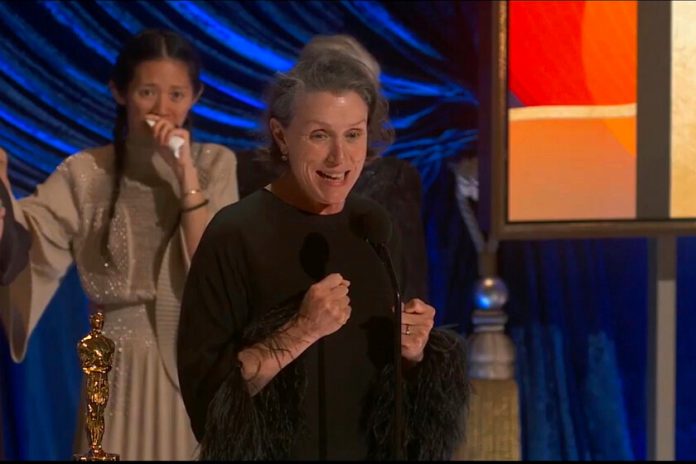 The 2021 Oscar gala concludes and there have been two hundred minutes in which good work in the cinema has been awarded, with few surprises, but with a somewhat reluctant celebratory impetus, as usual. Which dampened even the grand prix a bit.

The scant details provided by the Academy on the content of this awards gala endowed, even more if possible, an air of mystery surrounding what Steven Soderbergh had in store for us as the director of the ceremony. Unlike recent ceremonies such as the Golden Globes, Goya and the Emmys, there would be no zoom that would be worth it. It would be a party and it would be held in person.

And that has been seen practically from the red carpet, with the classic interviews taking place in a kind of lounge to relax having a few drinks like guests waiting for the bride and groom before the banquet. And the bride was Regina King, who with all her elegance took a statuette and entered Union Station in Los Angeles in a sequence shot. Soderbergh’s film begins in full color and in 2:35 format.

A small, modest stage, a few dozen distributed (I have not looked at distances) and the protocol delivery starts. The atmosphere is strange, relaxed. Arguably more familiar than ever. A moment to vindicate achievements, for joys and sorrows and to achieve a certain climate of honesty (as much as possible) and do something that is not usually done: introduce the nominees with a compliment. An appropriate statement of merits for the auditorium that the Academy has set up for this year.

An unusual sobriety in ceremonies of this time but that favors a favorable climate for emotional moments like Thomas Vinterberg talking about the process by which he created ‘Otra ronda’, winner of the best international film, and dedicating the award, how could it be otherwise, to his late Aida.

But the problem with this relaxed atmosphere and the absence of fanfare is, precisely, That translates to more time for speeches… and it shows through a certain heaviness in those moments that end up becoming eternal. And all this without counting on the already classic fillers (like the two blocks dedicated to the Humanitarian Award).

The social issues of many of the winning films provided that “excuse”, so to speak, to take advantage of that more time for some activism, vindicating the burning issues that have marked the calendar.

On the other hand, and without completely leaving the issue of diversity, they have not been able to resolve certain issues such as the presentation of the always wonderful Marlee Matlin (‘The West Wing of the White House’). A moment of simultaneous signing and interpretation that has not been carried out on television good.

Returning to the old ways in the rhythm of the gala

At the usual pulse marked by the laws of telecast, the night progressed. Emerald Fennel was the first recipient of her screenplay in ‘A Promising Young Woman’. Then the award for adapted screenplay for ‘The father’ foreshadowed that there would be few surprises in terms of winners. Or, at least, they always moved in that range of what was expected, so that, during the first two hours, everything was very distributed.

Boredom broke him, at least briefly, the Korean Youn Yuh-jung picking up the best supporting actress award for ‘Minari’. Jokes about how her name is pronounced, about her fellow nominees. His humor and endearing quality came just in time to wake us from lethargy and return to him.

The script of the night followed what was expected: that if ‘Soul’ better animation, that if soundtrack too. Something more of “surprise” was the award for HER for his song Fight for you from ‘Judas and the black Messiah’. The absence of musical performances have not helped the lead of the ceremony, especially when in place, and at a time when we are all begging for the end of our suffering, they pull a musical game up their sleeve. Although it made little sense, it has left us an unforgettable moment with Glenn Close dancing with Da Butt.

READ:  What Channel Is Fx?

Glenn Close has lost the Oscar again (8 nominations, no win) but that has not stopped him from shining and leaving us one of the moments of the night. #Oscars pic.twitter.com/bqK6zs5ALP

But one of joy and another of sadness somewhat accelerated with an In Memoriam that, to the rhythm of Rhythm & Blues, has hardly left time to read the names of the deceased during 2020 how fast they have gone.

And, suddenly, a new leap from the rundown with respect to the traditional. Jane Fonda appears on stage to give the award for the best film, which took ‘Nomadland’. Frances McDormand then took the stage again to win her third best actress statuette.

Retouching the rundown in that way played up to our expectations, as it promised either a tremendous and meaningful ending with the posthumous award to Chadwick Boseman for ‘The Mother of the Blues’ or, otherwise, some good ace up his sleeve. The Anthony Hopkins Award for ‘The Father’ It is well deserved, but the absence of the actor closed the gala in the most anticlimactic way possible. In tune with the gala, I guess.