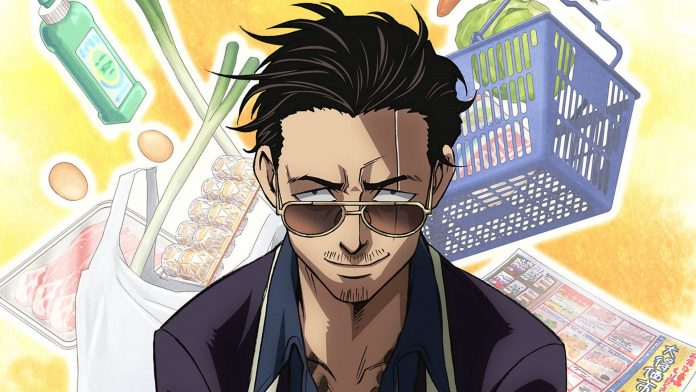 The Way of the Apron is the latest proposal of one Netflix increasingly launched also in the world of Japanese animated series. We are talking about the adaptation of the successful manga of the same name Kousuke Ono, running since 2018 on Shinchosha’s Kurage Bunch magazine and published in our country by J-Pop. Also this series, which has been able to conquer the public thanks to its hilarious demented comedy, is ready to take the plunge into the world of animation, but was it worth it?

The first season, consisting of 5 episodes of about 16 minutes each, it is also available on Netflix with dubbing in Italian starting from April 8, 2021. Here are our preliminary impressions of a transposition that seems to preserve the strengths of the original work without, however, supporting them with an adequate visual frame.

What would happen if a character worthy of a chapter in the Yakuza video game series, or a hard boiled film by Takeshi Kitano, suddenly decided to step out of the loop and devote yourself to the quiet life of the housewife? This is what the manga’s author apparently asked himself, who thanks to this intuition managed to give birth to one of the freshest and funniest serial comics of recent years. Tatsu, nicknamed “The Immortal”, is a legendary yakuza, feared and respected by all the gangs and clans of his neighborhood. One day however, the protagonist falls in love with Miku, a beautiful designer and woman with a very fast career, and decides to leave the past behind. As his wife is busy all day with her work, Tatsu begins to take care of the housework, without being able to shake off his ugly, old gangster habits.

The Way of the Apron is a series from episodic nature, consisting of self-contained stories where the protagonist (and not only) has to deal with the most disparate chores: shopping, house cleaning, sales, the purchase of a birthday present for his wife. Just the contrast between the simplicity of these situations and the way, exaggerated and out of place (also because of the threatening look), with which Tatsu faces them is at the basis of the comedy of the series, which parodies stereotypes and commonplaces of the yakuza imaginary, without however presupposing an in-depth knowledge of it on the part of the viewer.

Comedy that we also find in the animated series and that clearly shows the strength of the starting material. The first episode adapts the initial chapters of the manga by replicating the hilarity with good effectiveness, proposing itself as a light and carefree work suitable for having fun without thinking about anything else. It is perhaps natural to ask ourselves, given the spread of this type in Japanese television schedules, if so The Way of the Apron he would have benefited from an even lower minute per episode, for example 5 minutes all centered on a single sketch. But even so, the series seems to work quite well.

Where the series doesn’t work quite as well, as evidenced by the perplexed reactions of fans since the first trailer, is in his technical sector. The adaptation is done by the studio J.C. Staff, a veteran company especially in the comedy genre, directed by Chiaki Kon. We do not know if the exact reasons for this choice were dictated by production needs or by precise creative choices – let’s venture a mix of both – the fact is that The Way of the Apron it can hardly be called a work of animation, but rather a simple transposition of the comic strips. The sensation of movement is recreated in most cases by the movement of the camera, and there are very few real animated sequences. Fortunately, it is not all to be thrown away and, at least in the first episode, in some moments this style manages to adapt in an almost surprising way to the comic times of the opera, thanks also to the strength of the source material and a good direction.

READ:  My Hero Academia 5: a young All Might takes his first heroic steps

But of course there remains the regret in seeing an excellent potential not exploited to the fullest because of obvious technical limitations. We can only hope that the remaining episodes, which we will evaluate in the review, at least manage to raise the bar a little more, but the conditions are not good. At the sound level the first episode fares much better, thanks to a good pair of opening and closing themes, a decent soundtrack and above all thanks to the dubbing. There is little to say about the original Japanese one.

In the role of Tatsu we find the legendary seiyuu Kenjiro Tsuda, who also played the flesh-and-blood character in some promotional videos, whose hoarse and cavernous timbre it’s perfect for accentuating even more the hilarity of the sketches. The protagonist’s Italian voice is instead that of Riccardo Scarafoni, which is doing quite well despite not being able to compete, in terms of yield, with its Japanese colleague.