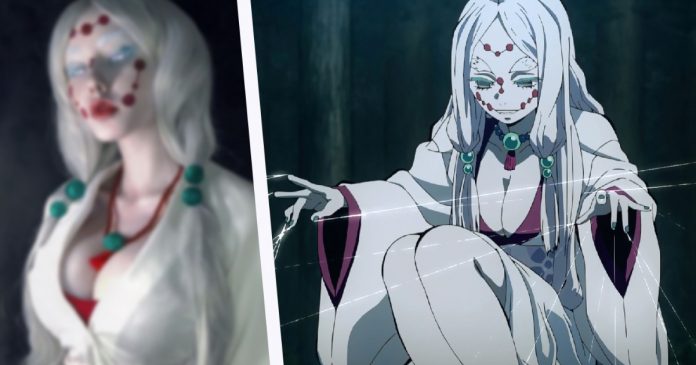 Fans of Kimetsu no Yaiba were delighted earlier this year when it was announced that the series of anime would return for a second season later this year. Now, a cosplayer girl decided to return to season one to celebrate the recent updates.

That’s right, the artist of Instagram brought back the mother of the Spider Clan using a cosplay incredibly creative. The Truth News It shares the image that went viral on the aforementioned social network, surpassing more than 10 thousand reactions and thousands of comments.

Instagram account EZ Cosplay shared this awesome Kimetsu no Yaiba cosplay, featuring the tragic character of “Spider Mom” ​​(Spider Mom) who gave Tanjiro and his friends a big headache as he threw the bodies of his companions at them using his nets as threads of puppets:

The Spider Clan itself was something of a tragic tale, especially when it came to the mother of the clan, who was essentially brought in as the patriarch to whom her “son” was dictating. This family was forcibly formed by Rui, the main antagonist of the Natagumo Mountain Arch.

Although “Spider Mom” ​​managed to do some truly heinous things as part of this creepy family, she ultimately fled for her life in a doomed effort to save herself after the atrocities she committed against the Demon Slayer Corps. Even another demon from the Spider Clan was defeated by Shinobu Kocho, the Hashira or Insect Pillar.

Although a North American release date for the first feature film of Demon Slayer and the second season of the anime, it’s clear that fans of the franchise are still excited for both.

The demons themselves can definitely be evil in this Shonen franchise, they can also be extremely preoccupied with their own complicated backstories. What will the second season of Kimetsu no Yaiba bring us?