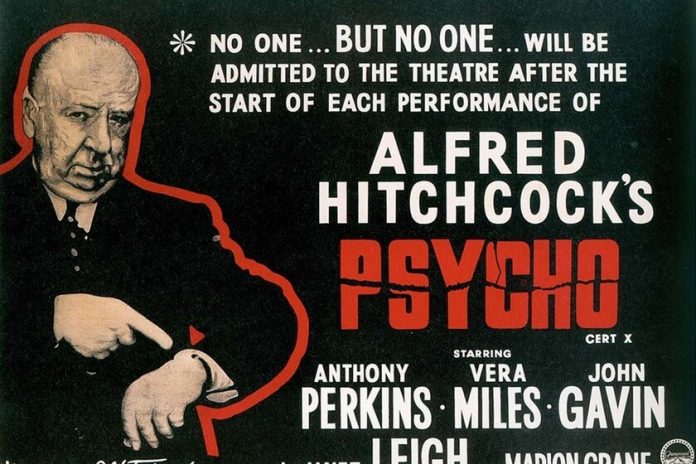 Much has been written about the impact of Psychosis, one of the most overwhelming works of the master Alfred Hitchcock and it is impossible to deny the current relevance of the film in modern cinema. It has influenced filmmakers of all generations and has generated sequels, imitations and, of course, the fear of the shower and motels of those who experienced that mass phenomenon in 1960. But with his work, Hichcock not only impacted with what appeared on the screen, but how he decided to change the habits of the audience at that time. Or rather, how he ended the mania of being late to the movies when the movie had already started.

To understand the phenomenon, you have to know that at that time people used to enter the screenings when they wanted, it did not matter if the film was started. The patterns of this ritual were summed up in a once-common slogan that is now unknown to moviegoers of a certain age: “This is where we come in.” Throughout the classic Hollywood era, viewers flocked to a movie screening whenever they felt like it, paying no attention to the progress of the narrative. What they were doing was basically going in the middle of the film and watching it to the end, watching the previous newscast, the animated and comedy short that aired at the beginning, and starting the film over to where they had come.

At that moment, the spectator whispered to his companion: “This is where we enter”, and then they left the room. It’s hard to believe, but it was like that. Until Hitchcock came along.

Some moviegoers were spellbound and immersed in the movie more than once. Although fans were already counting on the ticket price being an open access pass, many exhibitors (who wanted crowd control) and filmmakers (who wanted a captive audience from opening credits to end) disapproved. . The directors hated that viewers barged in and they will break, or never experience, the spell and magic of the movie. Cecil B. DeMille was particularly bothered by the fact that viewers, and not himself, decided how to experience his films.

In 1950, Twentieth Century-Fox producer Darryl F. Zanuck and director Joseph L. Mankiewicz realized how difficult it was to turn the clock on American viewers. Knowing that they had something special in their hands, they asked the exhibitors of the big cinemas that they wanted to reserve Naked Eve to sign a contract that “no patron should be seated after the movie starts” and “at the end of each performance, the theater should be clear.” Since the beginning of this movie is the end, it would spoil the enjoyment of any audience from not seeing her from the beginning, it was clear.

But after just four days, Fox dropped the proposal. Why? Many cinemas generally attracted large numbers of pedestrians enthralled by the lobby displays. Impulsive moviegoers simply they refused to wait for the next pass and they went to the nearby cinemas, which kindly let them in.

And then Hitchcock came along

It was the terrifying event of the year. 1960. Families, couples, friends, all packed the rooms, shouting and throwing themselves into each other’s arms. But this time it was going to be different. Hitchcock and the production team of Psychosis made a marketing effort (trailer and posters included) so that exhibitors close their doors to late-arriving spectators. “No one … BUT NO ONE … will be admitted to the theater after the start of each performance of PSYCHOSIS“read the posters, showing Hitchcock himself pointing to his watch as if warning students not to be late for class. Of the many film” firsts “attributed to Psychosis, the change in habits was surprising.

READ:  Goku is on his birthday and Dragon Ball fans celebrate it big 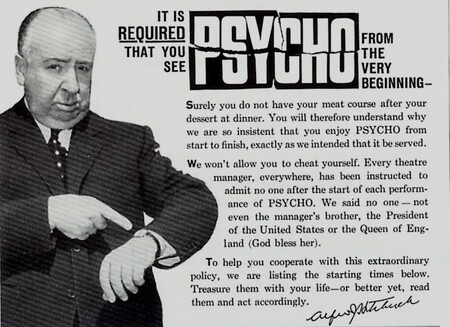 The idea was actually from Jerry Pickman, Paramount’s vice president of advertising, who I wanted to “protect the twist and the end of the story” and create the best atmosphere for Hitchcock to scare people. “The enjoyment of the movie would be diminished unless the customers saw it from the beginning,” Pickman said. Hitchcock, who was always his best publicity accomplice, followed his colleague’s plan. “I realize this is a revolutionary concept, but we have found that Psychosis it’s different from most movies. It does not improve when it is seen in another way, “explained the director.

If you know the movie, then you know that the whole plot revolves around the twist in which Marion Crane is murdered at the end of the first act, and the whole movie then leads to when her sister and her partner go looking for her at the Bates Motel. This twist leads to the even more shocking revelation that Norman Bates dresses as his mother and is the one who is killing. And of course, if you went to the cinema during the middle or the end, you would have spoiled everything. 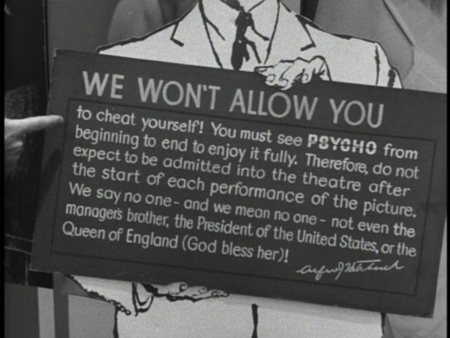 On June 16, 1960, after an exhaustive campaign, the DeMille and Baronet theaters in New York released Psychosis with the edict to see her from the beginning. Exhibitors pushed audiences in and out with military efficiency (staggered schedules, every two hours for the 109-minute film). Once Alfred Hitchcock lined them up, audiences knew that the middle of the movie was no longer the place to go. Sixty years after Psycho, guards no longer had to block movie theaters. And nowadays, no one in their right mind would enter any movie theater in the middle of a screening.

A pioneer against spoilers

But that’s not all, Hitchcock was also a pioneer in preventing spoilers. A few years ago, with the premiere of Avengers: Endgame, the directors of the film, the Russo brothers published an official statement: “When you see Endgame In the next few weeks, please don’t spoil it for others, in the same way that you wouldn’t want them spoil it for you. Remember, Thanos still demands your silence. ”Marvel even went ahead and bought an emoji for the hashtag #DontSpoilTheEndgame.

But this has already happened long before, at the hands of the same man who demanded to get to the movies soon. Alfred Hitchcock did everything in his power to make sure that everyone who saw him Psychosis they were aware that spoiling the movie for the rest was an idiot thing. And what did you do about it? It introduced an anti-spoiler message directly into the marketing. “If you can’t keep a secret, please stay away from people after seeing Psychosis“It was one of the mottos of the film. Here you can see one of the advertising posters: 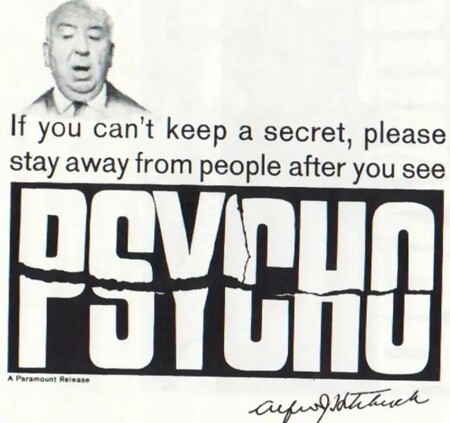 The director revolutionized film marketing with that horror play, and his efforts, of course, paid off, as the film was a huge success for Paramount. The stunts turned the thriller into an event theater, but more importantly, a director could be seen working overtime to protect the sanctity of the cinematic experience. And 61 years later, with movie spoilers rampant across the Internet, Hitchcock’s groundbreaking efforts back in 1960 can be seen today. Nobody wants to ruin the movie.