Stories seduce. Since Snapchat invented this ephemeral format, the main social networks in the world have incorporated it into their interface, even one as professional as LinkedIn, and there are already some websites, such as the sports newspaper Marca, that have also embedded them in their home using tools like Pendular.io.

And this is only the beginning, since Google has recently launched a plugin for WordPress by which anyone who manages a page with this content editor can incorporate, from now on, stories to their home. The Californian company introduced this format in two of its mobile news applications, Search and Discover, in October 2020, although only in the United States, Brazil and India, and now it is taking another step to fill the internet with ephemeral stories.

Because it is important? If Google drives it, it will be relevant to your search engine. Therefore, stories will become one more element of the web content plans of any company or professional for search engine positioning. In fact, the Americans specify that the stories will allow web publishers to “diversify their sources of organic traffic from Search and Discover results with direct traffic from the source and social sharing.” Therefore, they will have to be taken into account from now on in SEO strategies.

How are they embedded on the web? To incorporate the stories to a web page you have to install the Google plugin, called Web Stories. Once incorporated into Worpdress, its editing interface will appear in the left column together with the rest of the tools, and its content block can be placed in the place of the home chosen by the user.

The Web Stories editor allows you to embed stories in three ways. The first and simplest is what any social media user is used to: you create the content you want to share and launch it. The second option is to make a selection of old stories to post them on the home page, as is the case with the featured stories on Instagram profiles. And finally, there is also the option to insert stories from other platforms through their URL. 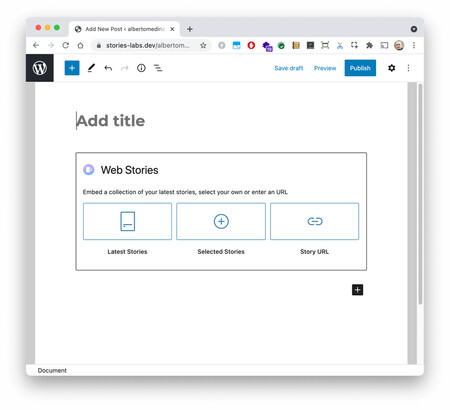 In addition, this Google plugin gives the option of visually showing the buttons of the stories in different ways on the home page of the web: as a carousel of rectangular or circular cards -that is, as they appear in most social networks-, in grid columns – in a similar way to the arrangement of normal photographs on the wall of Instagram profiles – or in the form of a list. 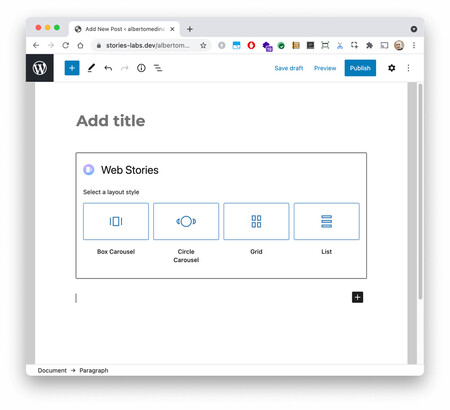 When? Web Stories is available in Spanish from March 18, 2021, and in English from February 17, 2021. However, Google has not officially announced its availability until now, a few days after launching version 1.5 of the tool, since it corrects some important bugs and, above all, facilitates its use and web embedding by users.

Google has specified that this plugin is available in the main WordPress default themes, as well as other popular third-party providers such as Astra or Neve.