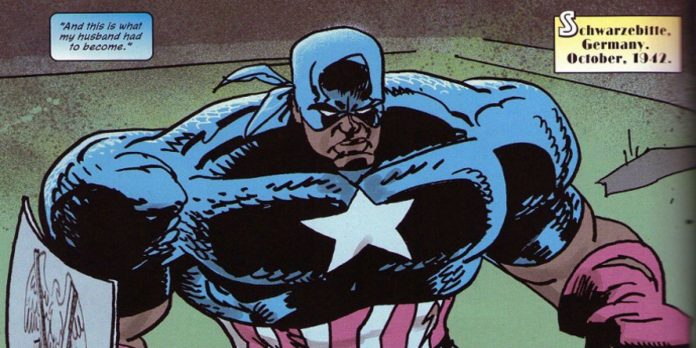 Phase 4 of the MCU is increasingly expanding the boundaries of Marvel audiovisual production, which is multifaceted and full of secrets like never before. In this sense, certainly The Falcon and The Winter Soldier is playing a fundamental role, as it has brought to our attention the backstory of two characters, namely Sam Wilson and Bucky Barnes, who will be very important for the future projects of the House of Ideas. However, this is not the only contribution of the show, because another great merit of his is that of giving space to figures and themes that were previously unheard of in the Cinematic Universe. The second installment of The Falcon and The Winter Soldier, for example, saw the live-action debut of Isaiah Bradley, starring Carl Lumbly.

Those familiar with Marvel comics will surely have remembered this name, wincing to think of one of the most dramatic stories ever written by Robert Morales, author for a long time of the comics series dedicated to Captain America. Bradley, sadly, had not yet been introduced to the MCU, and we expect his background to be deepened by the Malcolm Spellman series soon; waiting to discover its developments, in today’s article we will review together the biography of what is known as Black Captain America within the Marvel comic franchise, exploring his various appearances in the series in which he is featured. 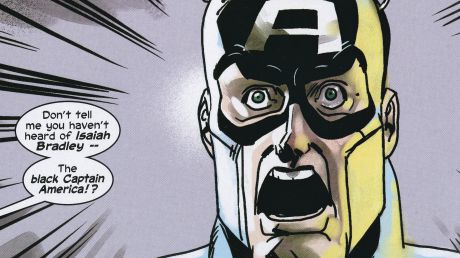 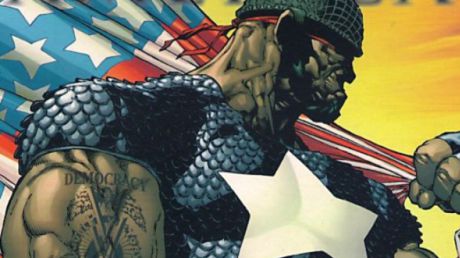 Isaiah Bradley makes his first appearance in the superhero world during Captain America: The Truth, a volume of 2003 divided into seven parts, in which Steve Rogers is forced to deal with a past he did not know, and makes an incredible discovery destined to change his life forever. The first time Cap hears Bradley’s name is during an interrogation at Philip Merritt, locked up in Lompoc Penitentiary for the murder of a federal agent, acts of domestic terrorism and various other hate crimes. Along with Rogers, agent Damian Spinrad is also conducting the interrogation, who briefly mentions Isaiah and the existence of Captain America Nero. From that moment, Cap begins a series of searches that lead him to learn the events of the first African American to wear the legendary patriotic superhero costume, in the words of Faith Shabazz, Isaiah’s wife.

Bradley was born and raised in New York, where he met his beloved Faith whom he married in 1940. Unfortunately, the two had to separate long after. Pearl Harbor. Isaiah, in fact, joins the army, and takes part in the terrible conflict against the Axis forces. At that time, the US government – despite the death of Dr. Abraham Erskine, better known as Josef Reinstein – was still intent on creating more super soldiers like Steve Rogers.

READ:  Ludwig beats Ninja as streamer with the most subscribers after being live nonstop for more than a month

With the aim of carrying out various experiments, Colonel Walker Price and Dr. Wilfred Nagel decide to forcibly submit a group of 300 African American soldiers to tremendous experiments, aimed at testing a new one super soldier serum. To keep their plans secret, the army sends letters to the families of the unfortunate, informing them of their tragic disappearance. Despite the news received, Faith has always refused to accept her husband’s alleged death over the years, continuing to investigate to find out the truth about what happened to Isaiah. 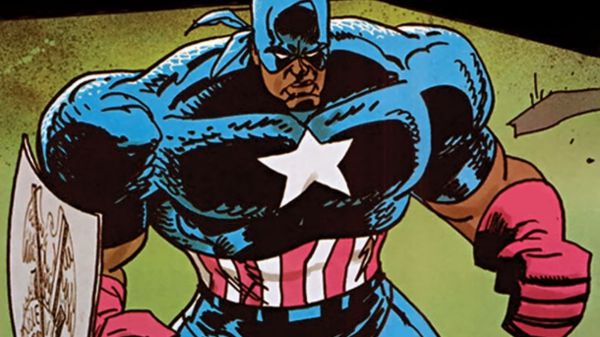 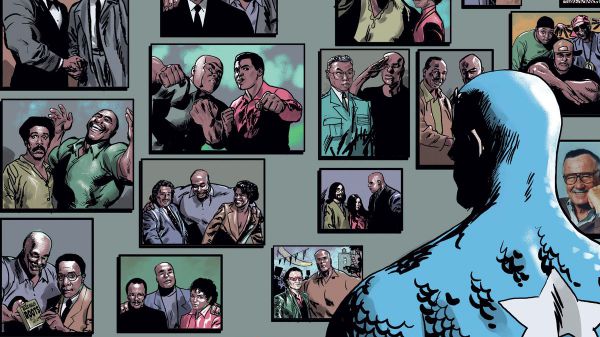 Of the 300 soldiers used as laboratory guinea pigs, only Bradley and a few other companions managed to survive the horrors they had to endure, gaining the same powers as Rogers. Since that time, their job has become to take part in clandestine operations secret on behalf of the US military. Over time, other members of the survivors’ group lose their lives, even due to increasingly complex and dangerous assignments, and Isaiah is sent on a suicide mission that involves the killing of Dr. Kosh – who was in the meantime developing his own version. of the prodigious serum on behalf of the Nazis – and the destruction of a German camp a Black please.

Before leaving to carry out his task, Isaiah appropriates a Captain America costume, and a shield to take with you. The soldier manages to blow up the entire laboratory, but, in an attempt to save some Jewish prisoners segregated in the camp, he is captured by the Nazis. 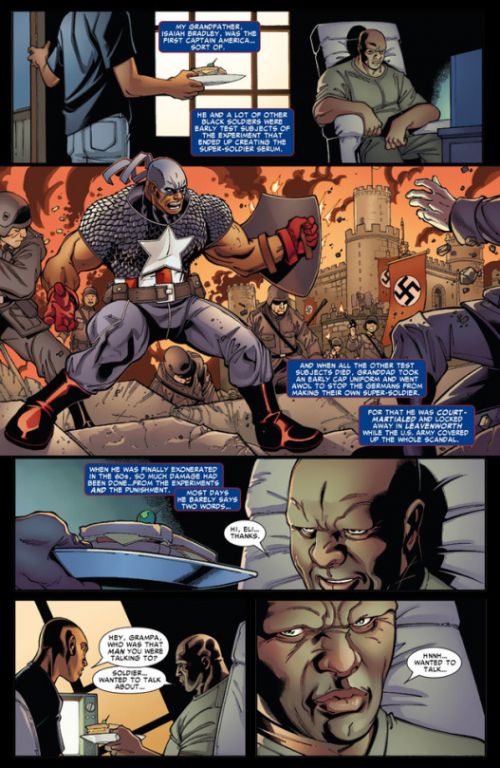 Here is where Bradley meets none other than Hitler himself. The Führer does not seem willing to kill him, nor does he want to imprison him for what happened, but makes an offer to the Black Captain: in exchange for his services to the German army, Hitler promises Isaiah the complete “liberation” of the African American people. At his categorical refusal, the evil dictator imposes the man’s confinement, to perform a series of medical tests on it, aimed at discovering the secrets of the research conducted by the US military on its own military. Fortunately, on the way to the laboratory, the convoy in which the hero is located is attacked by some German partisans, and so the Black Cap is freed. Before being able to return to his homeland, the valiant members of the resistance who saved him are forced to hide him for five months. After long moments of uncertainty and fear, Isaiah finally manages to return to the United States, but he doesn’t find the best welcome waiting for him.

The birth of the legend

Upon his arrival in America, in fact, Bradley is treated like a criminal: his crime is to have stole one of the Captain America costumes, owned by the government, and for this he is subjected to a court-martial trial. As expected, especially in the historical-political situation of the period, the man was found guilty, and the penalty was very severe. In 1943, Isaiah is sentenced to life in prison, a senseless act of punishment when compared to the kind of orders he had been forced to carry out during his military service.

From that moment, the super soldier’s life in prison begins, which lasts a good seventeen years. Every month spent in prison turns into agony for Bradley, as his body and mind take a beating. slow and painful deterioration process, due to the serum (evidently less stable than that used on Rogers). Faith does not lose hope, and constantly sends letters to the President and the highest state bodies, requesting a review of the case, without success. 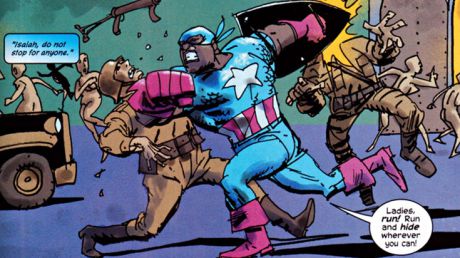 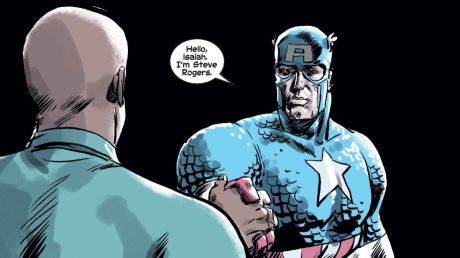 In 1953, Faith briefly moved to Mount Vernon, Virginia. Just then, Isaiah’s wife is contacted by a young woman, who claims to be the surrogate mother of a child born with the DNA of the two Bradleys. The mysterious girl tells her story, explaining how the US government had long tried to replicate the super soldiers survived the experiment, even after the end of the war, with the aim of exploiting them. Thirty-eight failures finally resulted in the birth of a child, who is named Josiah. Having discovered the evil plans of the army, the girl, taking the baby with her, set off in search of Faith; after finding her, he decides to entrust her Josiah, but Shabazz (who at the time already had to look after a daughter), soon abandoned her “son”, who was raised in an orphanage.

The story of the Black Cap, in those years, begins to become public knowledge, and Bradley’s name is often associated with that of other great figures who are victims of racist repression. Following Faith’s countless requests for acquittal, Isaiah’s long imprisonment ends in 1960, the day before John Fitzgerald Kennedy’s inauguration in the White House, gaining his freedom, through one of the latest measures of his predecessor, Dwight D. Eisenhower. After his release, the story of the Black Captain takes on even greater scope, and the man receives visits from influential personalities such as Nelson Mandela, Spike Lee, Angela Davis, Malcolm X and Colin Powell. Despite the importance of such a name, outside the African American community, its history remains almost totally unknown, until Steve Rogers starts wanting to know about what happened to a brave man like Bradley.

The meeting with Captain America

Having listened with great attention to the moving story told by Faith, Steve Rogers expresses even more the will to want to know the historian primo Black Captain America. Although the rumor has spread that the man was dead, in reality he is not, and Rogers can then meet Isaiah, shake his hand, and take some commemorative photos with him, as a sign of deep respect.

READ:  How "Psycho" (and the fear of spoilers) changed the way movie theaters forever 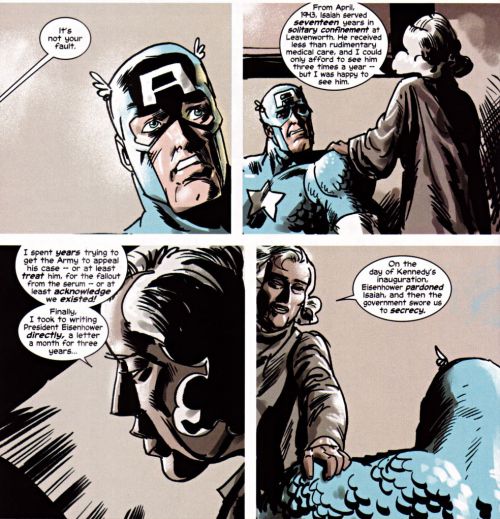 Furthermore, it is from Cap that Bradley receives the costume he had worn on his mission again (the heirloom was in the home of Merritt, a fanatic Nazi, and a fan of superhero comics). Steve begins from that moment a relationship of deep friendship with the whole family of the man, culminating in the invitation to marriage of T’Challa to Ororo Munroe (aka Storm). This is the opportunity for the African American superheroes attending the wedding to be able to exchange a few words with what is a real legend for them. However, life once again puts Isaiah’s existence to the test, this time due to some events related to his nephew. Elijah. Growing up admiring his grandfather’s exploits, Elijah Bradley is keen to become a superhero himself like Black Captain America, and for this reason the boy starts hiring theMutant Growth Hormone, to simulate super soldier powers, and lying about the origin of his abilities (Elijah claimed to have acquired them after a blood transfusion with his grandfather Isaiah).

Thanks to the new skills, the young man enters the group of Young Avengers, but without mentioning it either to the former Black Cap, nor to Faith. The two discover it only when Steve Rogers, in an attempt to disband a group as dangerous to manage as that of the Young Avengers, also names Eli among its members. During the’invasion of the Skrulls, Patriot (hero name of Captain America Nero’s nephew) saves Steve from the attack of a powerful laser aimed at him, acting as a shield. Badly injured, only a blood transfusion from his grandfather – this time real – is able to save the boy. Thanks to this operation, moreover, Elijah gains royal powers, which allow him to honor the name of his idol as a true superhero. 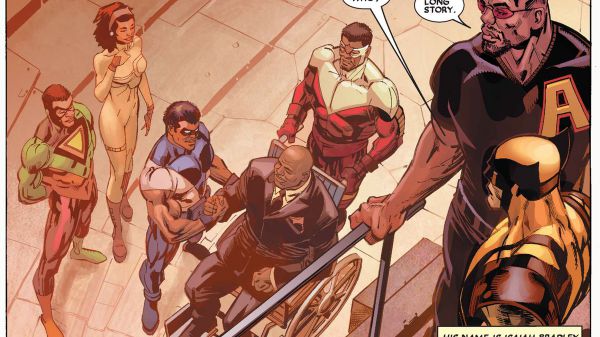 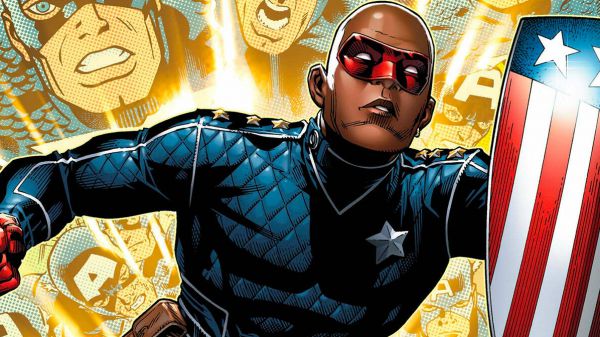 The story of Captain America Nero is certainly one of the saddest and most intense in the entire Marvel world. Although he has not been the protagonist of a large number of story arcs, Isaiah Bradley is a perfect example of resilience and willpower, values ​​that make him the symbol of courage in the comic book universe of superheroes. The hope is that even within the MCU, after its introduction, such a figure will know how to carve out its space, and can represent the whole set of ideals, justice and patriotism that have characterized the paper counterpart.