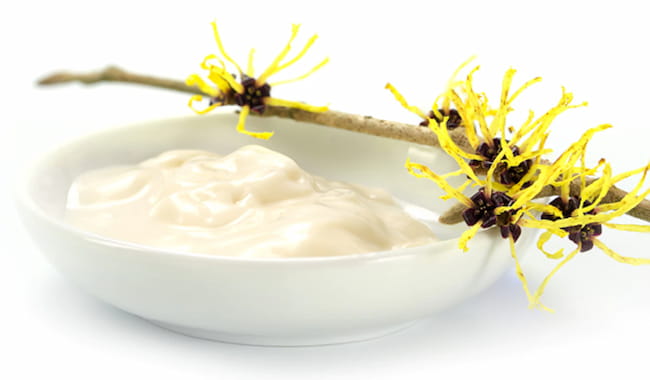 Benefits of Witch Hazel on the Scalp

witches hazel has been used for centuries to treat various skin conditions from acne, scabies, and psoriasis to varicose veins. It is also found in many over-the-counter hemorrhoid remedies. In addition to these skin treatments, it has other benefits that range from headaches and hemorrhoids to an anti-inflammatory agent.

Hazeline or witch hazel is obtained by distillation from the leaves and bark of the shrub Hamamelis virginiana, which grows wild in eastern North America and Canada. ‘Hamamelis’ means “something obtained from a plant.” It contains some organic compounds, including tannin, gallic acid, catechins, proanthocyanidins (or condensed tannins), saponins, cinnamic acid derivatives (such as ferulic acid), volatile oils (including eugenol and isoeugenol), terpenes, flavonoids, benzyl alcohol, choline esterase inhibitors, sterols, and triterpene alcohols, of which hamamelitannin is the most important.

Witch hazel has many uses in medicine. These include hemorrhoids, bruises, and sprains, insect stings, warts, sore throat, eye irritation, or inflammation, to name just a few. In addition, it can be taken orally for gastritis, loss of appetite, diarrhea, acute bronchitis. Several creams containing witch hazel are available over the counter without a prescription at most pharmacies for use for insect bites, sunburn, hemorrhoids, to name just a few conditions.

Witch hazel has been used topically to treat varicose veins. A clinical trial of 100 patients showed significant improvement when treated with witch hazel compared to placebo. However, it is essential to realize that no study has shown that the treatment works better than simply using ice on the affected skin.

It has also been shown that oral ingestion of witch hazel increased tone in the rat ileum – an intestine similar to the human gut. This may have implications in treating gastrointestinal problems such as irritable bowel syndrome, but more research will be required before any firm conclusions can be made.

Some applications of witch hazel have been known for a very long time, such as to treat bruises and sprains. In fact, it is now being used in many sports creams due to its anti-inflammatory properties. However, whether this is superior to other ointments containing similar ingredients has not been established by any study so far.

Insect stings may be treated with witch hazel as a cream or an ointment that is applied directly to the skin sting site. The medical literature does provide evidence that using a commercial witch hazel product can decrease swelling and pain from insect bites but does not actually help prevent any future problems if the bite site itself becomes infected.

psoriasis is a skin condition that causes itchy, red, flaky patches of skin. Scientists are not sure what triggers it. It might be linked to genes or certain infections. The patches are usually round and can appear anywhere on the body but are most often found on the back of the elbows, knees, scalp, lower back, palms of the hands, and soles of the feet.

Most people have flare-ups where their symptoms get worse for a while before they start to improve. Medicines such as steroid creams or light therapy can help during these flare-ups. But once your symptoms settle down your doctor may recommend stopping them.

Natural Witch Hazel is a rich source of flavonoids and antioxidant compounds that help in maintaining the oil balance. It also has astringent, antiseptic, and anti-inflammatory properties to relieve irritation and itching associated with psoriasis.

It can be used to treat any skin condition such as acne, spots, burns, insect bites and stings, etc.

Mix witch hazel with equal parts of Rosewater in a bowl. Add a few drops of tea tree essential oil. Pour this onto a spray bottle and shake well before each use for best results. Spritz your scalp generously at least twice daily or more if needed.

How does Witch hazel work for psoriasis?

Witch Hazel contains a chemical called tannin. This helps to dry out the scales and able to relieve itching. It is also effective in treating other skin problems such as acne, spots, burns, insect bites, and stings.

What are the precautions?

While many people can use witch hazel with no side effects or allergic reactions at all, few others may experience certain side effects after using it. So you should be aware of this before trying it out yourself.

Although rare there could be certain side effects that might occur when using witch hazel on your scalp for psoriasis or any other purposes including:

Skin dryness, redness, and flaking if the liquid witch hazel is applied on your skin.

Witch Hazel is not safe during pregnancy and breastfeeding. It might be unsafe for women who are expecting or trying to get pregnant as it could cause uterine contractions. Witch Hazel may also pass into breast milk and harm a breastfeeding baby. As such, you must avoid using this herb if you are pregnant or breastfeeding without consulting a healthcare provider first.

can I leave witch hazel in my hair overnight:

Yes, it will work even better if you sleep with a towel or a shower cap on your head. In this way, the Witch Hazel mixture can stay on your scalp for longer.

Witch hazel has been widely used as a natural remedy for several years now to treat numerous health problems from minor cuts and scratches to more serious conditions such as arthritis. It is known to exhibit strong antioxidant properties that help protect cells from damage caused by free radicals.

It also contains high levels of tannin which is what makes witch hazel useful in external treatments for wounds and hemorrhoids. The antioxidant properties help reduce inflammation and swelling associated with these conditions while the tannin helps sterilize the affected area by preventing bacterial growth. This aids faster healing as well as prevents scarring or marks from developing on the skin.

Individuals should not consume this herb without first consulting a healthcare provider if they are pregnant, breastfeeding, have diabetes, liver problems, or any other medical condition. People who suffer from epilepsy or other seizure disorders should also refrain from using this herb as it could potentially trigger an attack.

Also, if you are allergic to aspirin do not use witch hazel as it contains a substance known as salicin which is similar in structure to the active ingredient in aspirin.

There should be no side effects or harmful interactions when using this herb with other medications, including over-the-counter and prescription drugs. However, further research is still needed in order to conclusively establish any safety in its interaction with other pharmaceuticals.

Although rare, people who have asthma may experience an attack after contact with the leaves of this plant. Some individuals also complain of skin irritation such as rashes and itching upon coming into contact with this herbal remedy.

What kind of Side Effects do Witch hazel Pills might cause?

The tannins contained in witch hazel can also lead to stomach upset if consumed orally. However, the risk is relatively low as this herb has not been associated with any severe reactions or toxic effects.

Is witch hazel a blood thinner?

Although one of its components, tannin, can reduce inflammation and swell as well as control bleeding, it does not interact with the coagulation process which is what takes place during blood clotting. As such, there is no risk of this herb causing excessive bleeding or thinning your blood too much.

Also, using witch hazel for hemorrhoids should only be done short-term as over-the-counter products containing high levels of tannins can cause constipation leading to more discomfort and irritation in the affected area.

This natural herbal remedy has a long history of use for both cosmetic and medicinal purposes. It is effective in treating a range of health conditions from hemorrhoids to muscle pain, inflammation, and even serious disorders such as osteoarthritis.

Itching and redness in your scalp could be caused by several reasons. The most common include dandruff, dry skin, psoriasis, eczema, or even an allergic reaction to hair products you are using.

However, another less known reason for these symptoms is scalp fungus. It typically affects people who have a weakened immune system due to health conditions like diabetes or AIDS or taking medications that suppress the body’s defense mechanisms (e.g., corticosteroids). These factors cause fungi in the environment to thrive unchecked resulting in fungal infections of various parts of the body including the scalp.

So if you often experience itching, redness, and flaky patches on your scalp along with other signs such as sores on your head, it is best to consult a doctor for proper diagnosis and treatment.