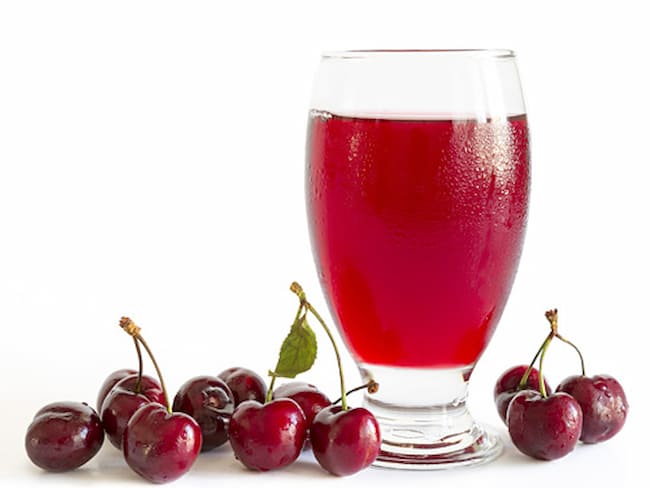 Tart cherries are one of the most concentrated foods containing melatonin, a naturally occurring antioxidant hormone. Studies have shown that tart cherry juice may help reduce inflammation due to its powerful antioxidant properties by inhibiting the enzymes that cause inflammation in blood vessel walls.

This can be helpful for preventing diseases like heart disease and arthritis. Tart cherries’ high anthocyanin content also provides extra antioxidant power, which is important because free radicals found in pollution, cigarette smoke, or processed foods can contribute to inflammatory conditions or even cancer.

Gout is caused by high levels of uric acid in your body, often due to eating certain foods or a build-up of uric acid due to dehydration. Since tart cherry juice has been shown in some studies to reduce levels of uric acid, drinking it can help relieve joint pain and swelling associated with gout.

Studies have shown that tart cherries may speed up recovery after an intense workout by reducing muscle soreness and damage. When athletes drank tart cherry juice before and after an intense training session, they experienced less post-exercise muscle pain than those who did not drink the juice.

The anti-inflammatory properties in tart cherries are thought to be responsible for this effect (see benefit #2). This means you’ll recover faster and be ready to hit the gym again sooner.

Tart cherries are one of the best food sources of the antioxidant melatonin, which is known for its ability to help regulate our body’s internal clock and encourage restful sleep. Consuming tart cherry juice has been shown to increase circulating levels of melatonin in the bloodstream, promoting a more restful night’s sleep.

In fact, it was as effective at improving sleep quality as prescription sleeping pills – without any reported side effects, luckily! As an added bonus, drinking tart cherry juice can also improve alertness in the daytime, another natural benefit of boosting your melatonin levels.

Anthocyanins in tart cherries may help improve blood flow and protect against LDL cholesterol oxidation, which is known to contribute to plaque build-up in arteries that can cause cardiovascular disease.

Tart cherries are also a good source of potassium, which helps reduce blood pressure by counteracting sodium’s effects on fluid retention, so it’s no surprise that drinking tart cherry juice has been shown to lower systolic blood pressure (the top number).

Drinking tart cherry juice has made women with recurrent urinary tract infections (UTIs) able to drink less or even avoid antibiotics altogether. This is likely because tart cherries are extremely high in proanthocyanidins, compounds that help prevent E. coli the main bacteria responsible for UTIs from clinging to the bladder wall.

Because of its anti-inflammatory properties, drinking tart cherry juice may help relieve the joint pain and swelling associated with arthritis. The antioxidants in tart cherries may also protect cartilage from further damage by reducing free radicals caused by inflammation.

May reduce symptoms of depression:

Antioxidants in tart cherries have been shown to help regulate neurotransmitters chemicals that affect mood, behavior, appetite, and sleep in the brain, so they may also help promote mental health by reducing symptoms of depression.

Tart cherries are also a good source of melatonin, which has been found to improve mood in people with insomnia, and folate, a B vitamin that is crucial for mental health. One cup of tart cherries delivers about 20-40% DV each of these two nutrients!

Consuming tart cherry juice daily can help reduce appetite and burn more calories. The antioxidants in tart cherries may help improve insulin resistance, which is associated with weight gain. Insulin resistance can also lead to Type 2 diabetes, so it’s important to watch your insulin levels if you are trying to lose weight.

Tart cherries are an excellent source of proanthocyanidins, a compound that helps reduce inflammation and swelling in the body. This is why drinking tart cherry juice can help relieve conditions such as gout, arthritis, and tendonitis that cause joint pain and swelling.

READ:  Ways to Reduce a Child's Temperature Without Using Medicines

Antioxidants in tart cherries have been shown to protect against free radicals which contribute to aging and cognitive decline or impairment. Tart cherries are also a good source of manganese, a nutrient known for its role in preserving brain function as we age.

They’re also a good source of copper, another “brain mineral” that plays an important role in brain and nerve function and may help prevent Alzheimer’s disease by preserving levels of acetylcholine, a nervous system neurotransmitter.

Anthocyanins in tart cherries may help improve blood flow and protect against LDL cholesterol oxidation, which is known to contribute to plaque build-up in arteries that can cause cardiovascular disease.

Tart cherries are also a good source of potassium, which helps reduce blood pressure by counteracting sodium’s effects on fluid retention, so it’s no surprise that drinking tart cherry juice has been shown to lower systolic blood pressure (the top number).

There are many different types of cherry fruit juice, as well as a number of benefits, which have been the subject of numerous studies. The tart cherries or sour cherries are grown primarily in Michigan and belong to the same species as sweet cherries – Prunus avium – but their taste is much more acidic and bitter.

The cherry has a long history and was extremely popular with Greeks and Romans because they used them not only for food but also for medical treatment. People were aware that this type of fruit had an effect on pain, fever, and inflammations already thousands of years ago.

Their popularity increased during the 19th century when French doctor Frederic Soulié de Morant discovered the analgesic (pain-relieving) effect of cherry juice. In his opinion, this effect is due to procyanidins contained in the cherries that have a therapeutic action on inflammations and pain.

Until recently, the therapeutic effect of cherries and cherry products was considered for cardiovascular diseases and to prevent cancer. Based on different works conducted in recent years, it has been proven that phenolic compounds contained in tart cherries have strong anti-inflammatory as well as analgesic effects. These results prompted scientists to conduct studies on pain management using this fruit.

Another reason for this type of tart cherry juice being so effective is the fact that it naturally contains melatonin, which is a very powerful antioxidant and sleep regulator. It has been proven that people who have low levels of melatonin are more likely to suffer from arthritis pain because free radicals cause inflammations in their joints.

The researchers believe that taking Montmorency tart cherry juice on a daily basis helps reduce inflammation in the joints and thus prevents arthritis symptoms. That’s why many people with arthritis recommend drinking at least one cup of this tart cherry juice every day.

The research conducted by the CherryPharm company shows that Montmorency tart cherry juice can be equally or even more effective than taking painkillers such as acetaminophen (paracetamol), ibuprofen, and others.

What is most important, no side effects of using tart cherry juice have been reported so far. This fruit is completely natural and does not have any contraindications with other medical products, which cannot be said about many analgesics.

The only limitation for drinking this tart cherry juice being recommended to use it within 12 weeks if you want to prevent arthritis symptoms or gout attacks because the constant intake of the juice may lead to liver damage over time. Also, people suffering from certain diseases should consult a doctor before deciding to drink tart cherry juice.

The results of a large number of studies conducted on this fruit proved that it is highly effective in reducing pain and inflammations which are the main symptoms of arthritis – as well as improving sleep quality.