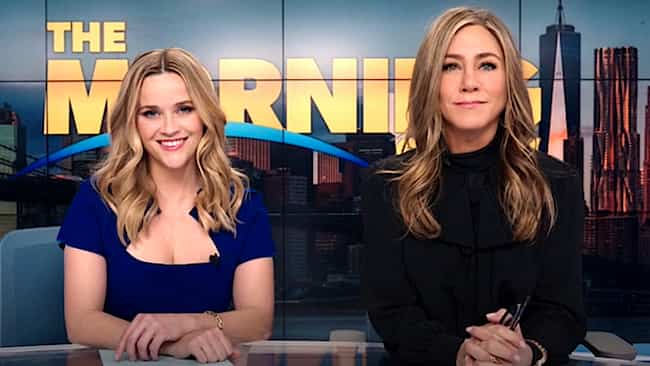 As The New Showrunner, Charlotte Stoudt Is Coming With The Morning Show Season 3

Charlotte Stoudt is replacing Kerry Erin for the 3rd season of The Morning Show, and it is official. The workplace drama featuring Jennifer Anniston and Reese Witherspoon is officially for season 3, and we are thrilled.

The second season ended in a tense atmosphere after allegations were charged against Steve Carell, an old colleague. Further, we also covered the early days pandemic. This lets us have a slight assumption that season 3 might begin on a new note.

Charlotte Stoudt is replacing Kerry Ehrin, the former showrunner and the developer of the show. Kerry Ehrin is serving the role of a consultant for the third season of The Morning Show. Stoudt has previously written for shows like Homeland and Verdon. Hence, expecting a thrilling third season doesn’t go unnoticed by the fans.

In an interview with Hollywood Reporter Ehrin says that the third season is going to start fresh. There is barely any story repeated from the previous seasons. It might also be futuristic for all we know.

Hence, the chances of anything occurring are endless for the renewed season of The Morning Show. However, if there’s anything for sure, the show will come back with something significant and impactful.

She also confirmed that the third season is going to skip the early days of the pandemic. This is a clue for a new plotline ahead of the production of season 3.

Matt Cherniss, programming head for Apple, said in an interview that there is a lot to expect from the lead characters of The Morning Show. With Charlotte Stoudt as the showrunner, there are endless possibilities for what the third season will look like.

The show might head towards perspectives that we never imagine about the world of morning shows. It will be fascinating to watch Jennifer Anniston and  Reese Witherspoon working under the direction of Charlotte Stoudt.

The expected spoiler would be that the show is close to a unique storyline that will connect with the viewers.

With endless thrill and buzz, the workplace of The Morning Show in season 3 will probably lead us through overwhelming emotions.

The storyline could pick up the hazardous time for all we know. Well, at least we can expect the unexpected. Will circumstances work out for the team of The Morning News, after all? We have yet to know about that.

The Morning Show has had a blast in their previous seasons, which included a tense storyline. The Apple TV originals will probably premiere the third season by the end of 2022, although nothing is confirmed.

As Ehrin said, there are endless possibilities for The Morning Show. The show could possibly turn in any direction while we still remain awed from the upcoming trailer.