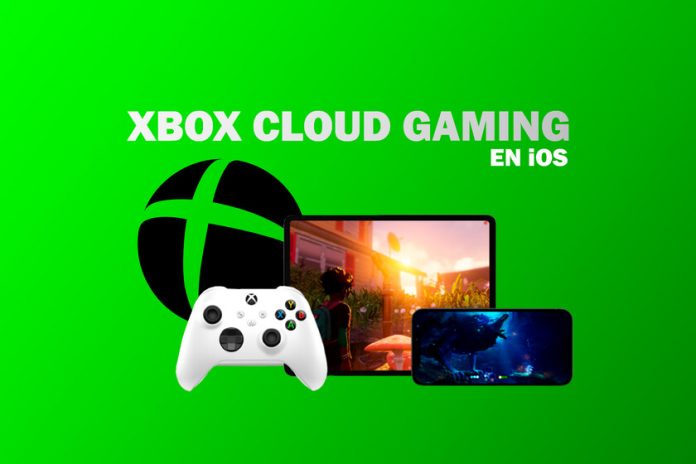 On September 15, 2020 Microsoft officially announced the arrival of Project xCloud to all Android device users. The platform was integrated into the Xbox Game Pass app to have everything centralized in one place, and thus not have to download anything else from the Google Play Store.

IOS users, due to the initial restrictions of Apple and its App Store (although they later opened the door to streaming video game services with a change in their regulations, they have not convinced Microsoft, Google and Nvidia enough to carry out the pertinent modifications), have had to wait a few more months to be able to play on the iPhone and iPad.

Following the path of Google with Stadia and Nvidia with GeForce Now, Microsoft has also chosen to develop an accessible web client through the Safari browser so users can enjoy Xbox Cloud Gaming on iOS / iPadOS devices, and the more than 100 titles available in Game Pass Ultimate.

Xbox Cloud Gaming on iOS: a testing experience that has yet to be polished 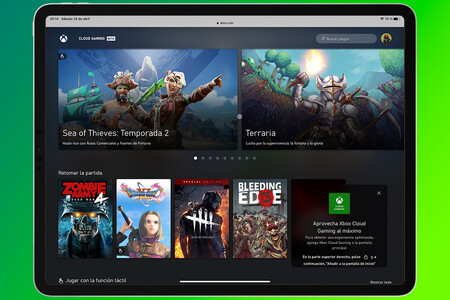 Microsoft took a further step on April 20 with its Xbox Cloud Gaming service (Project xCloud) by opening the web version for computers with Windows 10 operating system and devices with Apple’s iOS operating system, that is, iPhone and iPad.

Users from 22 countries (including Spain) are candidates to try Xbox Cloud Gaming in these environments if they have contracted Xbox Game Pass Ultimate. But not all interested customers have access, they must first receive an invitation from Microsoft that includes them in the closed phase. It is not necessary to order it in any dedicated portal, but it arrives at the Outlook address associated with the Xbox account with Game Pass Ultimate.

It is for this reason that it is difficult to predict when the invitation will be received (if at all), so you have to be patient and wait to be one of the lucky ones. I woke up last Saturday, April 24, with the email that confirmed the possibility of playing Grand Theft Auto V, Gears of War or Dragon Quest XI S by streaming. 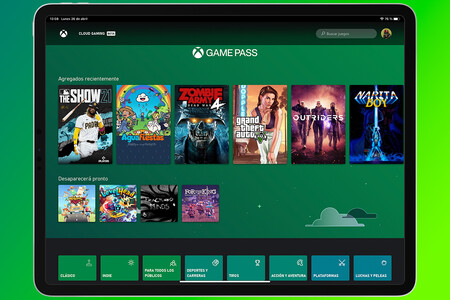 The Xbox Cloud Gaming requirements are not demanding. You only need a device with iOS 14, a compatible controller (official from Microsoft, designed for Xbox or that its operation is verified. In this link there is a list with functional options), and an Internet connection with a minimum speed of 10 Mbps. The cable is preferable, but if it is done by Wi-Fi (the most normal thing in tablets and smartphones) it is advisable to take advantage of the 5 Ghz network.

After logging in with the credentials of the account associated with Xbox in which the invitation was received (Microsoft insists: they cannot be forwarded or exchanged with other users), the platform is accessed. The design is quite straightforward and simple, with a large main carousel with recommendations, and just below it, there is a list of the titles we usually play, prompting us to restart the game in portability.

As in an Xbox game console, there are a section dedicated to video games recently added to Game Pass Ultimate and those that will soon disappear from the subscription. If you feel overwhelmed by the available offerings, you can access a more personalized selection by searching by genre (classic, indie, sports and racing, and shooting, among others).

The 10 Mbps minimum speed means that, in theory, it can be played on Xbox Cloud Gaming with almost any connection, both over Wi-Fi and 4G / 5G.

Also, there is a video game section compatible with touch controls in case you don’t have a remote at hand. This is more feasible on a smartphone up to 7 inches, but not on a tablet of almost 13 “and with a considerable weight.

Although there is an Xbox Game Pass app available in the App Store, the service is not integrated into it. As a workaround, Microsoft reports in a box at the bottom right that you can add a shortcut to the home screen so you don’t have to type the URL in Safari every time you want to access the platform.

During the time that I have tried Xbox Cloud Gaming, I have played a bit of everything. I have wanted explore different genres and mechanics to see how the service behaves according to the type of game. To do this, I’ve raced in Forza Motorsport 7, explored a fantasy world with turn-based combat in Dragon Quest XI S, and riddled hordes of the undead in Zombie Army 4: Dead War. 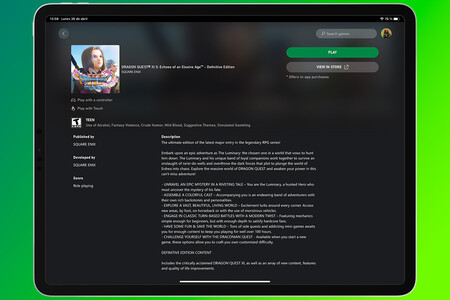 When you click on a game, it appears a detailed file with various information (genre, developer, PEGI, description of what we are going to find and content), as well as two buttons in the upper right: Play and View in store. The latter is in case you decide to buy a digital copy and continue with the adventure where you left it when it is no longer available in the subscription.

If we give it to play, we will see a new screen with a spaceship made up of polygons in which the user is notified through messages that the server is preparing to start playing the title. You have to wait a bit, but nothing worrisome: it usually takes no more than half a minute. The problem is in the gaming experience.

Playback with skips and a lot of input lag 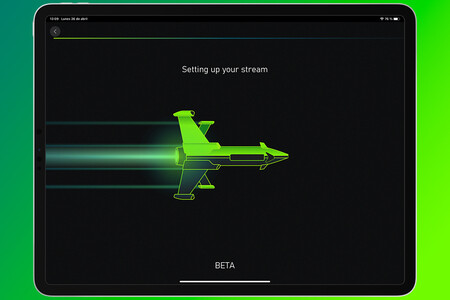 Before proceeding to comment on my experience, I would like to emphasize that This is a service in the testing phase, so the team in charge of its development is still working on it and, probably, it will be polishing in the next months the problems that I have encountered. Unfortunately, Xbox Cloud Gaming has many things to polish if it wants users to play on its service instead of opting for Stadia, GeForce Now or Amazon Luna (unreleased in Spain and much of the world).

Video games have cinematics that serve to advance the story by introducing new plots and solving conflicts, so I have seen fit to comment that, on occasions, I have experienced image skipping or freezing when playing videos. It is something that I did not expect to see, since the user does not interact in them. And if the judder bothers me in movies and series (I am quite sensitive), in video games it is no exception.

This already put me on alert. Unfortunately, Xbox Cloud Gaming hasn’t improved much in this regard since I tried it out in September using a smartphone with Android operating system (and I don’t count the time I fiddled around to get it to work on an Nvidia Shield TV because it’s not officially supported, but it was also a disaster). 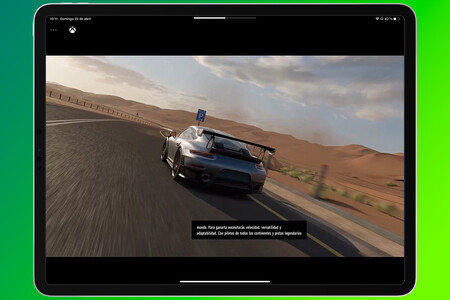 On the other hand, the Input Lag is quite remarkable. This is the time that passes from when we press a button or move a joystick on the controller until the character / object performs the action. It is high, and depending on which titles it is impossible to play like this (see shooters competitive like Call of Duty, especially in online or competitive multiplayer). Interestingly, I have noticed it more in some games than others.

In Forza Motorsport 7 it is difficult to drive the car with the delay. Taking sharp curves or avoiding a collision with other vehicles means anticipating taking into account that the wheels will not turn when we move the joystick. Even in Dragon Quest XI S, a turn-based RPG where it shouldn’t be a major inconvenience, menu navigation becomes slow. Not to mention when we make the hero run across the stage and interact with objects, it is a bit “maddening”.

When the game is finished, a poll appears on the screen to assess how the experience has gone (Stadia also uses them to continue improving with each game session we have). It is very important that the user dedicates time to them and gives their opinion so that the developers have feedback and know where to focus to polish the service.

The Lag Input makes it very difficult to enjoy many titles. A problem that keeps dragging from the beginning

I think the game that I have found most comfortable in is, paradoxically, in the shooter Zombie Army 4: Dead War. It’s not perfect, and it also has Input Lag, but it wasn’t particularly difficult for me to target the heads of the undead to take them down.

The future of Xbox Cloud Gaming is promising, but it has a way ahead and there is strong competition

I’ve been a Stadia user since Christmas taking advantage of the Cyberpunk 2077 offer with the controller and Google Chromecast Ultra for free. I had never played in before streaming (beyond trying xCloud very briefly on Android in September 2020), and the experience was surprisingly good: 4K resolution (with Stadia Pro), a catalog of titles that is growing month by month and an imperceptible input lag in most of cases.

Surely, the experience of an established service that is not in the testing phase like Stadia, whose operation really is almost magic, has caused me a disappointment, today, with Xbox Cloud Gaming. But it is what advanced before: they are not comparable yet.

Xbox Cloud Gaming servers are powered by Xbox One S hardware, which influences the load times and general operation of the service. They need to be updated. Now that their new generation of game consoles have come out, once there are more supplies, they should choose to switch from the One S to Series X if they want to be more competitive.

The main strength of Microsoft’s proposal is your catalog, with titles that are available since its launch in the subscription fee of Game Pass Ultimate, and that with the acquisition of Bethesda will go further with new exclusive deliveries. But the performance of Google Stadia and GeForce Now (the latter with Ray Tracing) are superior to that of the Redmond company.

Regardless, I have faith in Xbox Cloud Gaming. It is true that it is far behind its competitors, and that it continues in this state in mid-2021 does not invite us to think that we will have a more stable service this year. But if the main criticism of its rivals is the catalog, in this proposal we have a free buffet of hundreds of titles, even AAA, for a monthly fee and with which it is difficult not to have something to spend hours on.