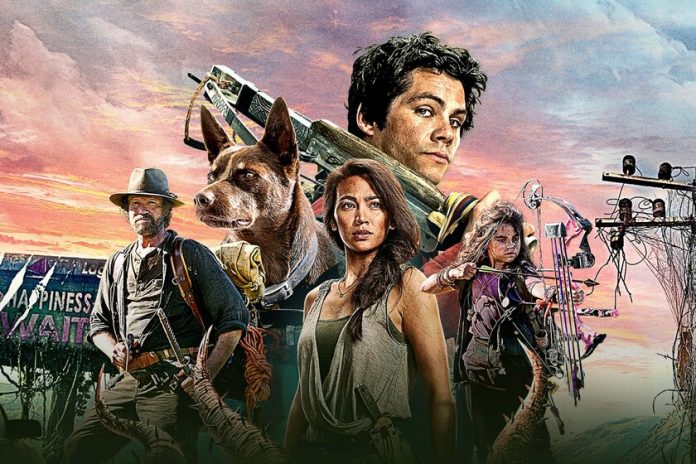 The end of the world has become such a sci-fi topic that -like time travel and alien invasions- has already been recycled with all possible shades. From reflective tragedy (‘The road’) to bombastic action adventure (‘Mad Max: Fury Road’), passing through drama with a message (‘Children of men’) or, of course, comedy with varied doses of romanticism.

For example, in ‘Welcome to Zombieland’, the zombie apocalypse and all its clichés, stolen from ‘The Walking Dead’ and other modern classics of the genre, they are accompanied by the parody of the conventions of the end of the world (assault of shops, bewilderment at the loss of value of the material). A slight romantic plot takes over the plot in the last section, in a curious counterpoint to ‘Monsters’, a much more emotional adventure with kaijus destroying civilization in the background, while the lovers move to the first.

‘Of love and monsters’, which has just landed on Netflix, combines elements of both: brings the emotional to the fore, with monsters and action to complement the story, but never forgets the comedy and light tone. In this case, a boy madly in love with his girlfriend before the disaster decides to make a dangerous week-long journey on foot through a terrain full of monsters to meet her again. Along the way, of course, he will learn about himself and the world around him and become a true hero.

READ:  'WandaVision 4', The Chapter of the Answers that connects with 'Avengers Endgame'.

Nothing new here, and that is its main virtue: ‘Of love and monsters’ embraces the topic, and does it with great grace. A clumsy and kind-hearted hero, but thanks to the great performance of Dylan O’Brien (who already planted in front of a dystopia in ‘The Maze Runner’) he easily manages to get the viewer to empathize with his unfortunate epic. This piece of machinery is what makes the film stand up perfectly, even though most of the film consists of O’Brien wandering with a dog through deserted places.

‘Of love and monsters’ may be bullshit, but he knows how to take his own fiction very seriously. The monsters are splendidly designed, in a mixture of childish fantasy of a giant bug and a very cool mutant nightmare. Y they look on screen as if they were muppets giants, which is how giant monsters should always be, despite being computer-animated. The protagonist’s encounters with the marsh salamander, the inevitable final boss or the sensational subterranean wasp are those that remain in the memory once the film ends.

READ:  How to make iPhone notify you when Apple Watch is fully charged

The dramatic chicha of the film is not very consistent, but it is sustained thanks to the tremendous naivety of the protagonist, who runs to meet his youthful love after seven years without seeing hima, and with an apocalypse in between. His enthusiasm is contagious, as is his fear of danger and his sincere affection for the four-legged friend he makes along the way. All thanks to a good script by Brian Duffield, to whom we owe recent fantastic cult pieces like ‘The Babysitter’ or ‘Underwater’.

Although the gears in the film are greased with clichés, andThe splendid roster of secondary schools works perfectly, and they give the adventure three-dimensionality. The best are the two seasoned nomads played by Michael Rooker and Ariana Greenblatt (curiously, we have recently seen them in the Marvel Universe as Yondu and the girl Gamora), who interact in a hilarious and emotional way with the protagonist.

READ:  'Synchronic. The limits of time ': a stimulating and lysergic journey through the fourth dimension of the creators of' Infinity '

‘Of love and monsters’ is a movie that is easy to love: its characters fall in love quickly, it is full of action and good jokes, and sends an optimistic and good vibes message. Because the post-apocalypse doesn’t always have to be dirt, bad fleas, and clouds of dust. Sometimes the reverse is the really hard thing to tell, and it’s worth having movies that try.