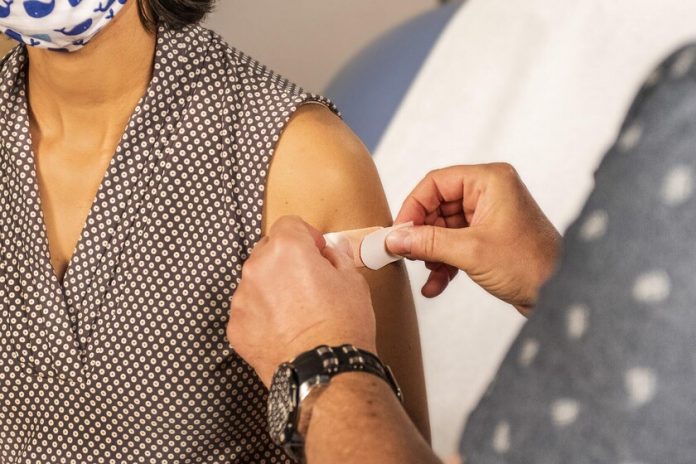 Counting all the doses that have been administered in Spain of vaccines against COVID-19 (Pfizer, Moderna, AstraZeneca / Oxford and Janssen) we have already reached the complete guideline for 3.7 million people (7.9% of the population) and the first dose to more than 10.1 million people (21.4%). 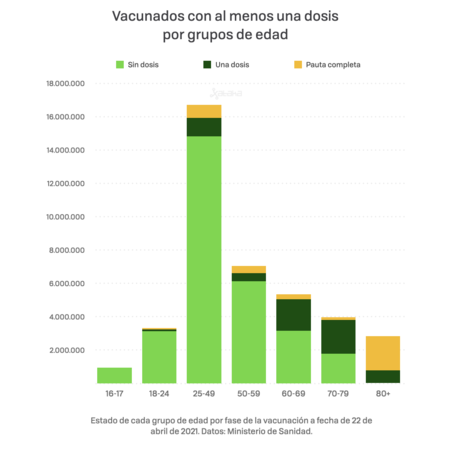 In the case of those over 80 years old, the most vulnerable population, the percentage is much higher: almost ten out of ten (99.4%) have already received at least one dose, more than half (72.1%) reach the full guideline. This age segment has received only Pfizer and Moderna vaccines. 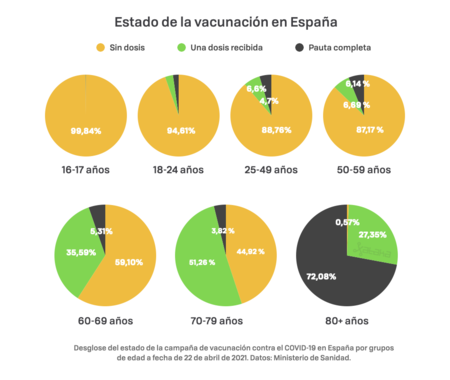 In total, then, just over 20% of Spaniards already have a dose of the COVID-19 vaccine, but we are not counting the percentage of Spaniards who already have some immunity because they have passed the disease. In this case, according to the latest seroprevalence study, 9.9% have already passed COVID-19, that is, 4.7 million people have already fallen ill with coronavirus. Or put another way: those vaccinated with the complete schedule in Spain are already almost as many as the total number of infected.

As of today, then, there are already more people vaccinated even with just one dose than people who have passed COVID, and between the two, more than 30% of the population is added. A third of Spaniards have a significant immunity against the coronavirus.

Progression from the start of the campaign

On February 12, 2020, a month and a half after vaccinations began on December 27 in most of the EU, Spain registered the first million immunized thanks to the vaccine.

Given that Spain has already administered more than two million doses in the last week, a figure similar to that of the last seven days, 70% of the vaccinated population would be reached in November of this year. But this date is obtained if we follow a linear progression similar to that of recent weeks. If we accelerate the pace, reaching 1.5 million people each week, then we are still in time to reach the goal by the Government of having 33 million people immunized by the end of August.

But we don’t have to wait for August to see some very favorable changes in mortality. According to a study by the Computational Biology and Complex Systems research group of the Polytechnic University of Catalonia, mortality will fall by 60% in May thanks to the vaccine.

When the maximum immunization of each vaccine arrives

Each vaccine has a different degree of protection, but in general we are talking about very high percentages. With everything, there is a small gap between the number of vaccinated and the number of immunized, because immunity is acquired after a period of time after the administration of the vaccine.

AstraZeneca is the vaccine that takes the longest to reach maximum immunity– It takes 10-12 weeks between doses and takes another four weeks to achieve the highest protection. For Moderna, the process takes six weeks. For Pfizer, one month.

In the case of the Janssen vaccine, which has already been approved by the EU and of which Spain will receive 5.5 million doses from April, maximum protection is obtained 14 days after the administration of a single dose.