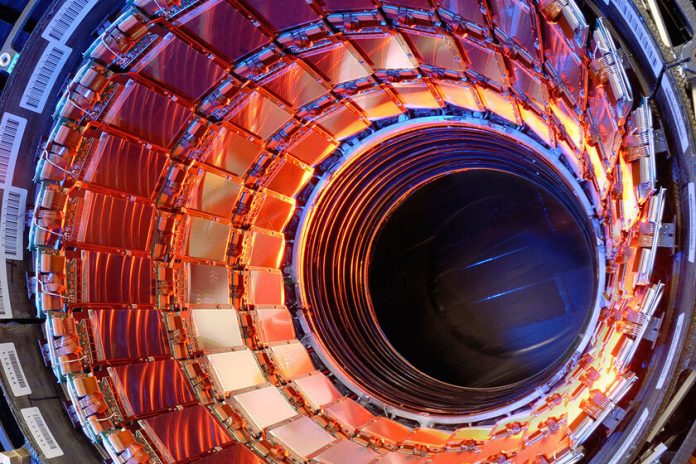 Particle physics is going through a very exciting stage. Probably the most exciting since CERN officials made the discovery of the Higgs boson official in 2012. The tiny particle that has thousands of physicists around the planet excited about the possibility of finally going beyond the frontier of the most solid theory we have to understand the laws that govern the functioning of the universe it’s the muon.

Physicists suspect that this particle is our best asset in finding a crack in the standard model several years. A priori it may seem that finding a crack in the theory that so far has offered us the most accurate description of the universe is bad news, but it is not. Quite the opposite; this is very good news.

And it is because the standard model is so round and well supported that until very recently physicists did not know which way should they take to do new physics. To continue finding the answer to the many questions about nature that we still cannot solve.

Physicists suspect that muons have been our best asset in finding a crack in the standard model for several years.

Fortunately, what was initially only a suspicion has been acquired in recent weeks sufficient consistency to invite us to accept that this new physics could be relatively close. And in the center of all eyes is the particle that I told you about in the first paragraph of this article: the muon.

What is a muon

Very broadly and leaving complicated details aside, we are interested in knowing that this is an elementary particle that, like the electron, has a negative charge. However, their mass is approximately 207 times that of the electron, causing them to accelerate more slowly when subjected to the effect of an electromagnetic field. And also that they emit less braking radiation, which is a form of electromagnetic radiation that occurs due to the deceleration of an electrically charged particle.

Muons are only produced when high-energy collisions occur, such as those involving cosmic rays or those that occur in particle accelerators

Muons belong to a family of particles known as leptons, in which they coexist with the electron, the electron neutrino, the muon neutrino, the tau and the tauonic neutrino. In this article we do not need to inquire into the characteristics of these particles, but it is good for us to know that muons are unstable, which causes that when they originate they decay rapidly, disintegrating to give rise to the production of other particles, such as electrons, which are stable, or neutrinos (only the electron neutrino is stable).

READ:  OnePlus 7T review: Nothing to complain about, but what’s new?

A very important characteristic of muons is that they only occur when they take place high energy collisions, such as those in which cosmic rays are involved, and also in the collisions that humans cause in particle accelerators. And this is where our story really begins, in two experiments that have been carried out at the two most advanced particle accelerators on the planet: CERN and Fermilab.

As we are going to see below, these two experiments, which we have already told you about in Engadget, have shed light on a possible crack in the standard model. And both have as protagonists the muons. The purpose of this article is to be as affordable as possible, and, as we can guess, the implications of these experiments they are extraordinarily complex. Fortunately, we can know roughly what they have consisted of and why they seem to let us glimpse gaps in the standard model without having to investigate its most inaccessible characteristics.

Fermilab’s experiment and the magnetic moment of the muon

We are all familiar with magnets because they are present in many of the devices we use on a daily basis, such as speakers. However, the property of these objects that interests us in this article, the magnetic moment, is relatively unpopular. We need it as a starting point, so we can define it as a vector quantity that reflects the magnetic force and orientation in space of an object that is capable of generating a magnetic field.

The funny thing is that not only magnets can do it. Most subatomic particles also generate a magnetic field, and for this reason they have a magnetic moment. Physicists long ago found a way to measure this property of particles, and along the way decided to introduce the g factor, which is a quantity that identifies the proportionality that exists between the angular momentum and the magnetic moment. 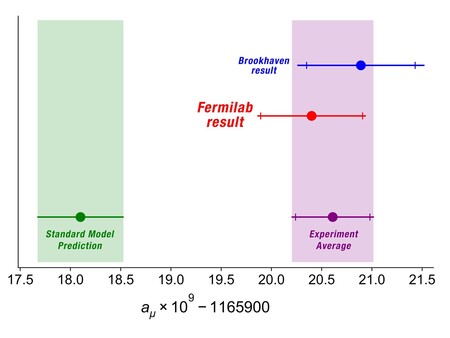 This graph compares the prediction of the standard model with the results obtained by the Brookhaven National Laboratory and Fermilab in the Muon g-2 experiment.

An easier way to understand what the factor g is is to see it as a magnitude that allows us to determine how the magnetic moment changes of a particle. The standard model is able to predict the g factor of a particle with precision, and everything was going well until at the end of the 1950s a group of physicists from CERN led by Leon Lederman launched an experiment known as Muon g-2 that it was intended, precisely, to measure the magnetic moment of the muon.

CERN’s early experiments cast some doubt because they showed small discrepancies with the standard model, but it was nothing that could be considered definitive because the measurements were not accurate enough. Later, in the 1990s, this experiment was repeated at Brookhaven National Laboratory, which belongs to the United States Department of Energy. This time measurements were more accurate that CERN obtained, and, again, the hints of an anomaly in the magnetic moment of the muon were there.

The combination of the measurements obtained in the Muon g-2 experiment by Fermilab and the Brookhaven National Laboratory yields a discrepancy of 4.2 sigmas.

If we wanted to understand what was happening, we needed even more precise measurements, which caused the Muon g-2 experiment to be repeated over the last decade, but this time at the facilities of the American high-energy physics laboratory Fermilab. A few days ago the researchers of these facilities, as we told you at the time, made public the results of their experiment. And your g-factor measure moves away by 3 sigmas of the standard model prediction.

Broadly speaking, and again without going into complicated detail, this notation reflects the statistical relevance of a result, so that ‘more sigmas’ indicate greater statistical significance. The combination of the measurements obtained in the Muon g-2 experiment by Fermilab and the Brookhaven National Laboratory yields a discrepancy of slightly more than 4 sigmas with the standard model (4.2 sigmas exactly), so there is still something below the 5 sigmas required to confirm the anomaly and minimize the uncertainty stipulated to secure a scientific discovery.

This result is very significant, and, although it is still necessary to continue analyzing the data before reaching a definitive conclusion, the researchers consider the possibility that the deviation of the muon g factor, which in theory should be 2, is due to the presence of an unknown particle or a fundamental force that we have not yet identified. This is one of two cracks in the standard model that keeps physicists expectant.

The CERN experiment and lepton universality

The experiment we have just investigated is not the only one that is apparently allowing us to glimpse a fissure in the standard model. The LHCb detector of the LHC, CERN’s particle accelerator, has produced measurements that are also very revealing. This experiment has been designed primarily to investigate the properties of the background quark or b quark (this designation comes from the English bottom quark).

A very relevant characteristic of leptons, a family of particles to which, as we have seen, the electron, the muon and the tau belong, is that they interact in the same way with the other particles. This behavior is known as lepton universality. A consequence of this property is that, if we stick to the particles that are unstable, when they decay, their disintegration gives rise to the generation of other particles, and all of them appear with the same probability. 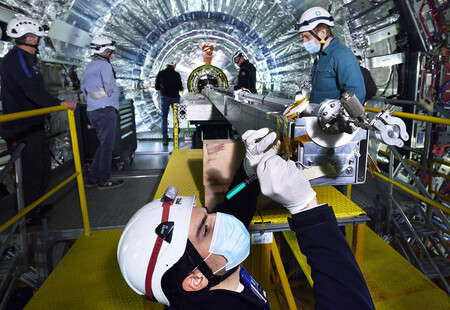 The CERN LHCb experiment has been designed primarily to investigate the properties of the background quark or quark b (hence the ‘b’ in the acronym LHCb).

However, CERN researchers have long suspected that when a B meson disintegrates the lepton universality described by the standard model breaks. And the latest measurements they have taken seem to corroborate this because globally this decay does not produce the same number of electrons and muons, which is what in theory should happen. It generates more electrons.

Once we have reached this point we must ask ourselves, as with the Fermilab experiment, what is the uncertainty that the LHCb experiment handles. In this case the measurements show 3 sigmas, which is why they have not yet exceeded the 5 sigma threshold necessary to conclusively conclude that lepton universality has been broken. But, as with the previous experiment, this result opens a very promising way to develop new physics as long as, yes, physicists manage to verify that the cracks that we think we can glimpse in the standard model are actually cracks.