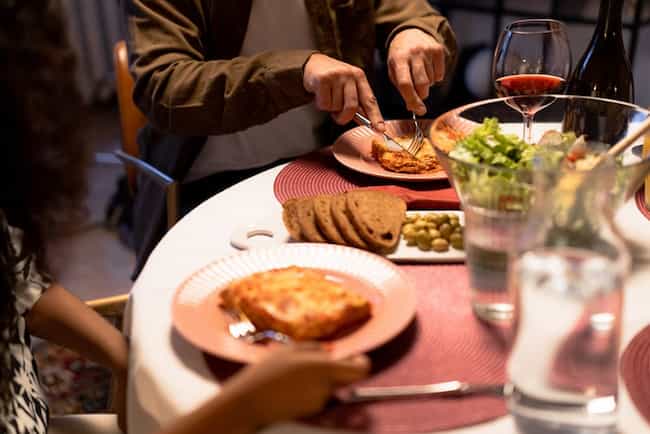 What Is A Pescatarian And What Do They Eat?

A pescatarian is a person that follows a vegetarian diet but still eats fish and Seafood. The word “pescatarian” comes from the combination of “vegetarian” with the Latin root “pisc-” for fish.

Pescatarians usually exclude red meat, poultry, eggs, and dairy products from their diets. In some cases, even some types of vegetable oils are excluded too. Pescatarians can live on a nutritionally balanced diet, but they might lack essential nutrients or protein if they do not plan their meals carefully.

What is a pescatarian diet:

A Pescatarian is a person who does not eat meat but eats fish and other Seafood. They do so for their health and ecological reasons.

Pescatarians agree with the vegetarian diet philosophy that says we should avoid eating meat because it has harmful effects on our bodies and life sources.

However, fish and Seafood are seen as better, more humane alternatives to meat, which is why some people choose their diet to be pescatarian rather than vegetarian. This type of vegetarianism exists in many cultures worldwide, such as Greece, Japan, Portugal, etc., where fish is a regular part of people’s diets.

There are other types of vegetarianism, such as lacto-ovo vegetarianism (which involves consuming dairy products and eggs). Some combine these different types into a more comprehensive or stricter version, such as veganism, which avoids all animal products (including honey). So you can easily be a lacto-ovo-vegetarian or a vegan, but you cannot be a Lacto-Ovo-pescatarian or a vegan.

The foods you buy will depend on the pescatarian diet you want to have.

If eating fish is your primary goal, the only concerns are things like mercury and other toxins in different types of fish, so it is essential that you know which ones are safe to eat. You can also avoid these toxins by eating farmed fish instead: they contain much lower levels than wild fish. They don’t cause environmental damage because they do not affect animal life populations, while fishing does.

Generally speaking, lean white freshwater fish such as tilapia or cod can be eaten without worry because their populations aren’t affected when farming them. Salmon, mackerel, and tuna also present low risk, but it’s best to eat them in moderation because they contain higher levels of mercury.

Shellfish are also fine to be eaten but vary depending on whether you’re consuming common or exotic types. Commonly consumed shellfish such as shrimp, lobster, clams, and mussels should not be eaten raw because this could cause food poisoning from bacteria in their intestines that you might accidentally ingest while eating them.

Some people choose only to eat the meat part and avoid the intestinal track altogether by poking a needle through it, but that’s entirely up to each person’s preference. Exotic shellfish such as king crab and geoduck should only be eaten cooked because cooking them destroys parasites that would otherwise make us sick when we consume them raw.

How to start a pescatarian diet:

As mentioned before, it’s entirely up to you which type of pescatarian diet you want. If you wish for the “full experience,” try eating fish for a while and see how it goes. People typically base their choice on the type of lifestyle they lead, so some people might not afford Seafood or might not like its taste so much, so they go with the veggie version.

But if your primary concern is your health and well-being, then lean white freshwater fish such as tilapia or cod are the cheapest advisable option because they contain fewer toxins than wild species do. You can also avoid these toxins by eating farmed fish instead: they have much lower levels than wild fish. They don’t cause environmental damage because they do not affect animal life populations, while fishing does.

There are different kinds of pescetarianism, just as there is other vegetarianism. For example, Lacto-Ovo vegetarians eat dairy products and eggs but avoid all meat; vegans avoid all animal products, including honey, etc. A pescatarian will usually eat Seafood and avoid red meat and poultry.

How much should pescatarians eat:

diet requirements vary according to the kind of pescetarianism you might be following: vegan, Lacto-Ovo vegetarian, or full version, including fish intake. Pregnant women are advised not to follow a strict vegetarian diet because they need more nutrients than nonpregnant people. If you’re pregnant, then it’s best if consult your doctor if you can follow a vegetarian diet and which kind of vegetarianism is best.

No, a vegetarian diet excludes all kinds of meat, including fish. Most vegetarians don’t eat fish because even though it doesn’t have a brain and central nervous system like mammals, its behavior is complex enough to make them feel bad about eating it.

The kind of pescetarianism you want to follow will depend on your personal preferences, but be careful with raw shellfish because some can contain bacteria that can make you ill if eaten raw. If you’re pregnant, check with your doctor before trying a vegetarian diet: they might recommend one type over another for specific medical reasons.

No, a pescatarian diet excludes all kinds of meat from land animals. Pescatarians only eat fish and Seafood, which is fine because it contains less saturated fats than red meats. Some people might say that some sea creatures such as octopus or squid have a brain and central nervous system like mammals do. However, the jury’s still out on whether they feel pain, think, or have any other attributes we usually associate with conscious life forms, which make us sad when we kill them for food.

Most vegans don’t care about this issue because their primary concern is protecting animal populations from destruction by farming practices. In contrast, some vegetarians don’t believe in eating certain foods no matter what.

It depends on the kind of vegetarianism you’re following. Some dairy products can contain animal rennet if you’re not vegan, so they aren’t suitable for vegetarians, but Lacto-ovo vegetarians will have no problem eating them. Vegans don’t eat animal-derived products, so they’ll have to avoid dairy products in addition to meat if their kids are younger than seven years old.