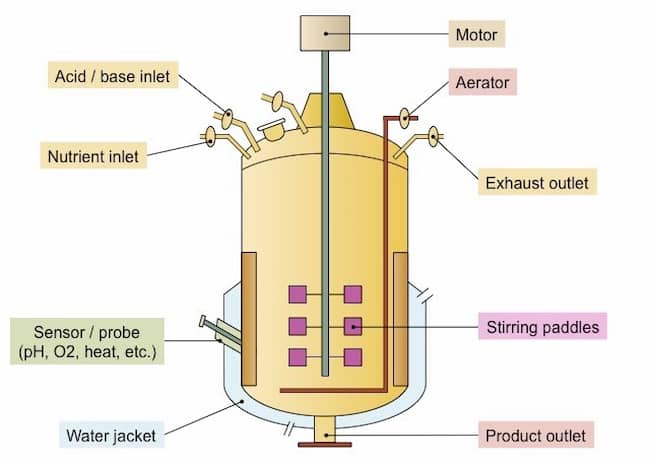 What Is a Fermenter

A fermenter is a vessel used in biochemistry and brewing to facilitate sugar fermentation into ethanol and carbon dioxide. Culturing yeast in a fermenter to produce beer, wine, or other alcoholic beverages is called fermentation.

There are many different types of fermenters available on the market. They can vary in size, shape, and material composition. The most common type of fermenter is the cylindrical vessel made from stainless steel. This style of the fermenter is often used for beer brewing, as it allows for the Krause to form on the surface of the wort.

Other popular fermenters include conical vessels and square-shaped vessels known as square bodies. Conical fermenters are more expensive than their cylindrical counterparts, but they offer several advantages. Conical fermenters can be equipped with whirlpool attachments that facilitate the separation of trub from wort.

Square-bodied fermenters are usually less expensive than conicals and cylindrical tanks, but they cannot cope as well with high-pressure drops. Square vessels also do not have the same degree of material compatibility as conicals or cylindrical tanks, making cleaning more difficult.

Most fermenters consist of 3 main components: the lid (head), body (cylinder), and bottom assembly (belly). Most homebrewing fermentations occur in the body; indeed, many commercially available fermenters are food-grade buckets fitted with a spigot (tap) near the bottom. The lid seals onto the body to create an airtight environment where the yeast can do its work.

READ:  The Batman trailer is recreated with 2D animation

Some fermenters, such as conical tanks, have a cone-shaped bottom that allows the brewer to collect and remove sediment (trub) from the beer more efficiently. The belly is the section of the fermenter that rests on the floor or table on which it is placed; it is typically where the heating and cooling elements are mounted.

Some less common features can be found on some fermenters. These include:

Racking arm – A racking arm is a pipe that extends from the top of the fermenter and allows the brewer to siphon beer off the top without disturbing the yeast cake.

Blowoff tube – A blowoff tube is a piece of tubing that extends from the top of the fermenter and allows carbon dioxide to escape. When used in conjunction with an airlock, it prevents contamination of the beer by airborne bacteria.

Sanitary fittings – Sanitary fittings are a connector used to attach hoses and other pieces of equipment to the fermenter. They are designed to be easy to clean and resistant to bacteria build-up.

Tri-clamp fittings – Tri-clamp fittings are a type of sanitary fitting that uses three bolts to secure it in place. They are often used in commercial breweries because they can withstand high-pressure levels without leaking.

what is a fermenter for wine:

A fermenter is a vessel in which wine, cider, perry, or beer are fermented by adding yeast. It’s the temperature-controlled box you’ll use for your next batch of homebrew.

Fermentation vessels range from simple plastic buckets with snap-on lids to sizeable stainless steel conical fermenters complete with pumps and temperature control systems. While many different types of fermenters are available on the market, most homebrewers prefer plastic buckets or glass carboys. These two vessels offer both simplicity and economy at a relatively low cost. Both containers are easy to clean, sanitize and have airtight lids that help keep out bacteria that could spoil your brew.

READ:  When Are Bob's Burgers Season 6 On Netflix

Stainless steel can also be used as a fermenter material, but it’s generally more expensive and can be challenging to keep sanitized. One advantage of stainless steel is that it doesn’t scratch as easily as plastic or glass, meaning it won’t harbor any unwanted bacteria. Suppose you’re looking for a more sophisticated fermentation system.

In that case, there are several stainless steel conical fermenters on the market that offer temperature control and other features not found on the average homebrew bucket or carboy.

what is a secondary fermenter:

A secondary fermenter is a container used in the fermentation of beer, wine, cider, and other alcoholic beverages. After completing the initial fermentation process, it is typically used to clarify and carbonate the drink. Secondary fermentation can also add flavor and complexity to the liquid by allowing it to age for an extended period.

There are many different secondary fermentation vessels available on the market. Still, the most common are glass carboys and stainless steel tanks. Glass carboys are economical and straightforward to use.