Closed a 2020 full of revolutions for Weekly Shonen Jump, the flagship magazine of the Shueisha house has now set foot in 2021, already bringing new series.

We have seen the return of famous authors such as Yusei Matsui and Kenta Shinohara in the first round of serializations of 2021. Weekly Shonen Jump brought four new series to readers between January and February of this beginning of the year, but it certainly did not stop here. In fact, as happens roughly every quarter, the magazine is preparing future serializations.

There will be two new series on Weekly Shonen Jump, leaked from the first leaks of the magazine that will be officially published in Japan next Monday, April 5. The titles saranno Ao no Hako e Ame no Furu, both by authors little known to the Western public.

Ao no Hako, translatable into Blue Box, is the serialization of the homonymous oneshot that has received much acclaim on Weekly Shonen Jump in 2020. The author is Koji Miura who, in addition to the self-contained chapter of Ao no Hako, has previously published Parasol Alliance, Aozora Rubber and Sensei Suki Desu . The manga will, if similar to the pilot chapter, focus on both sports and romance.

The second title to make its debut is Ame nu Furu, written by Takegushi Ippon and drawn by Mitarashi Santa. Little and nothing is known about the synopsis of the manga for now, as is the writer Ippon. Mitarashi Santa has already dedicated himself to some self-contained chapters over the last few years such as Deiken no Yusha no Goei, Disaster Girl and Cinnamon Nanmon, all published in the various paper and non-print magazines of Shueisha.

To make room for these two series has already been announced the Phantom Seer cancellation, which closed at 30 chapters, while in the next issue we will know what the other manga will be canceled. 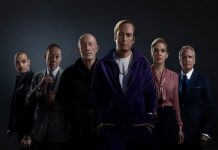