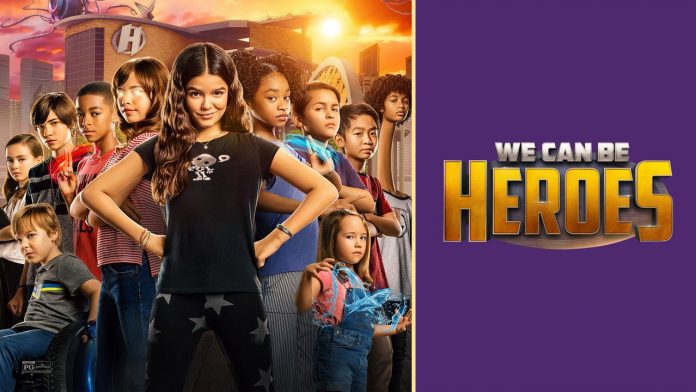 About makers and publishers:

Robert Rodriguez was the writer, director, producer, cinematographer, and editor of the movie. The visual effects of this superhero movie were given by Weta Digital.
The maker studio was none other than Rodriguez’s ‘Troublemaker Studio’. Music was given by Rebel Rodriguez.

The first part was released by Netflix on 25th December 2020 and the second part is into making.

Theme and plot of the movie:

The supernatural movie is about, kids saving their superhero parents from Aliens.
Aliens are on their mission to kidnap Earth’s superheroes and succeed initially. After the kidnapping took place, super kids were handed over to a government safe house under the watch of Ms. Granada. However, unstoppable Missy Moreno decides to get her superhero dad back at any cost and for the same, she teams up with the rest of the kids.
The first and foremost thing was to escape from the sight of babysitter Ms. Granada of government safe house. And the journey then takes a super rollercoaster ride then.

The cast of ‘We can be Heroes’:

READ:  Prior To Season 1 Release Halo Is Already Renewed For A Second Season

The story starts with Missy and her dad Marcus receiving summon to help other superheroes. While superheroes are captured by aliens, kids are kept at a government safe house under the watch of Ms. Granada.
There, Messy gets to meet other superhero kids, each having special skills. Wheels holds super-intelligence; Noodles as the name itself, can stretch his body unbelievably; Ojo is someone who only communicates through art; A-Capella can move objects by singing, amazing isn’t it?; Slo-Mo is always in slow motion; Face Maker is someone who can make any face; Rewind and Fast Forward, a combo of twins who can alter time; Wild Card is someone with high powers but no control!; and last but not least Guppy, who has got “shark strength” and can shape water into anything.
While watching a television show where aliens and superheroes fight, they realize that Ojo’s paintings show nothing but the prediction of a future where aliens will be attacking superheroes on earth.
How they together escape from the babysitter’s sight is an exciting incident. Face maker deceived guard, Guppy controls him, Rewind controls the time when guard causes trouble, Noodles stole security badges. However, Ms. Granada spots Messy running and locks her, however, A-Capella creates stairs in a hallway and somehow all kids manage to escape with the help of a vehicle that Noodles managed to secure.
Nowhere else but they end up in the house of grandma who trains them. To save the kids, grandma sends them to the tunnel, when the aliens attack. Kids through the tunnel reach to empty alien craft through which they wish to go to Mother ship. There they see Ms. Granada and the president speaking, who happens to be spies working for aliens. While they are kept in a cell, Guppy creates a duplicate key to escape. However, in the fight between aliens and children, Wild Card gets caught and sent for interrogation. Surprisingly Ojo confesses that she can actually speak and is head commander of the aliens, while the wheel hacked motherboard. Now the things get a little messed up. Messy talks with wild Card but Face Maker has switched roles with him. On the other hand, Wild Card and Noodles are working on deactivating and replacing the motherboard. In doing so, the alien’s Rocket gets deactivated and their mission to take over earth fails.
A spoiler alert!
To the surprise of kids, parents come out of Rocket and along with grandma and Ojo, confesses that they all faked the alien incident just to train them to be heroic enough to save the world.

• As per Fastcompany, the director expected that 53 million households would watch the movie within the first four weeks.
• As per Newsweek, it was one of the 25 most-watched movies of 2021.

Tell us in the comments about what are your views on the movie and what do you expect to see in the sequel?

Hurry up, we are waiting for your response.