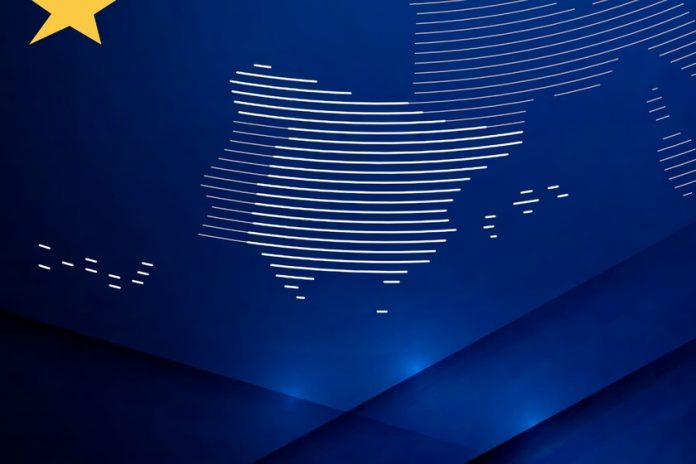 Which is already known Spain’s plan to take advantage of European funds ‘Next Generation EU’. The President of the Government, Pedro Sánchez, has presented the ‘Recovery, Transformation and Resilience Plan’, a route in which almost 70,000 million euros will be invested between now and 2023, with important endowments for electric mobility, housing rehabilitation and modernization of public administrations.

Here we review how the Recovery Plan funds are distributed, which sectors will receive subsidies and on what it is intended to spend the money that the European Union is going to distribute among the member countries with the aim of promoting new technologies and boosting the economy after the pandemic .

Of the 70,000 million euros of the Plan, at least 27,000 million euros are already contemplated in the General State Budgets of 2021 via debt. The project of the European funds aims until 2026, with the intention of mobilizing up to 140,000 million euros, but for the moment the investments of the first part have been finalized, until 2023. The objective of all these initiatives is to ensure additional growth of the GDP of two points on average from 2021 and the creation of 800,000 jobs.

Of the almost 70,000 million euros of the Recovery Plan until 2023, more than 30% of European funds would go to the mobility industry, construction and public administration.

European funds are intended as an aid to mobilize funds in “flagship initiatives”. Among those chosen by the Government of Spain is the promotion of green hydrogen, 5G connectivity, artificial intelligence or renewable energies. Although, the investment in each of these projects is uneven and has its respective economic item.

Among the investments, the promotion of sustainable mobility stands out in the first place, closely related to initiatives around the electric car such as the battery factory and the renovation of homes. Two projects that comprise around 30% of the planned investments. 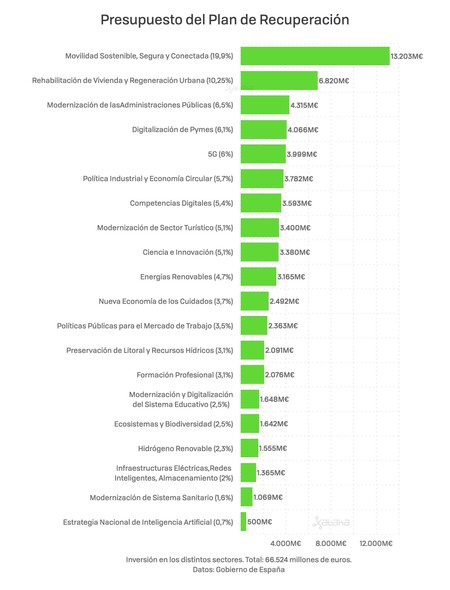 This is the cast chosen by the Government. Some funds that will already be partially investedas recovery funds from Europe will come later. Once the Recovery Plan is finalized, it will be presented to the European Commission, although it will not be until three months from now when they decide if the plan is approved.

During the previous months, some of the projects that are now included in the plan have been presented individually, but in this time there have been changes in the figures. What used to be 600 million is now 500 million, for example in the National Artificial Intelligence Strategy. A figure that once passes through the European Commission could be modified again.

While experts like Borja Adsuara, consultant and ex-director general of Red.es, point out that “it would not make sense for a plan to be made to help and then from the European Union it is not allowed to spend it on the proposals”. It is not expected that there will be so many changes in the figures, but in whether they will really be able to invest correctly. “It is not that Spain does not have money, but for example in SMEs they do not have the resources or the knowledge to access and take advantage of these aid,” explains Adsuara. A problem that he believes will eventually lead to be the big companies who end up executing these projects, since they are the ones who have the knowledge and resources to take advantage of these funds.

The great challenge of the Government is not only to distribute the money, but to make sure that small businesses and organizations can benefit.

If there is a sector that has benefited from the Recovery Plan, it is the automobile sector. The electric revolution has shaken the motor industry and has already caused thousands of layoffs. Spain seeks to maintain these jobs and for this the Government’s plan involves take advantage of European funds to update the motor industry in Spain.

“European funds are used for projects that were not already contemplated,” says Adsuara. The European Commission wants these funds to go to innovative initiatives and the electrical transition is positioned as one of the changes that meet many of the aspects sought: many jobs, expected economic return and easy technological justification. 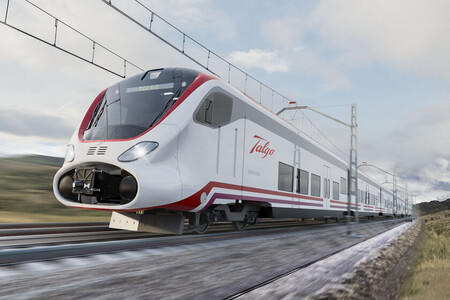 The 13,203 million euros for sustainable mobility are divided into two blocks. 6,536 million for a “crash plan for safe and connected mobility in urban environments”, which includes initiatives such as increasing the electric recharging infrastructure, the creation of low-emission zones in municipalities with more than 50,000 inhabitants or the improvement of the service suburban. On the other, some 6,667 million will be dedicated until 2023 in infrastructures such as Atlantic Corridor and the Mediterranean Corridor.

The automobile industry is in the middle of a technological revolution and has a great weight in Spain. Much of the European funds will go here.

Another of the great beneficiaries is brick. Construction is one of the great national sectors and European funds will also go here. However, it is done from a more modern perspective, focusing on the rehabilitation and energy efficiency. In total, 6,820 million. An item that represents more than 10% of the total and clearly above other projects.

The top is completed by the modernization of public administrations, with an item of 4,315 million euros in which it will be invested in the “modernization of the Administrations of health, justice, SEPE, Social Security, migration and inclusion policies, consulates, and a launch of tractor projects in Interior and Defense, Agriculture and Consumption “

SMEs, 5G and digital skills have a strong presence

The promotion of SMEs is another of the main axes of the Recovery Plan. 4,894 million for initiatives such as the Spain Entrepreneurial Nation, the Spain Digital 2025 Agenda and grant programs. It’s about a challenge that Spain has had “for 20 years”, according to Adsuara, and where “all previous plans have failed” by not providing enough for these aid to reach those who may need it.

In a related way, the plan establishes 3,593 million euros for digital skills, both in education and for employment. The objective is also mobilize private investmentFor example, initiatives such as the one in mid-March with Google professional certificates along with 5,000 scholarships.

The digital transition is one of the axes that the Government is using to attract these funds. 3,999 million euros will go to the development of the network, from the deployment of 5G to the extension of 30 Mbps coverage for 100% of the population.

Science at the height of tourism

In a somewhat smaller range of investments is the modernization of the tourism sector, renewable energies, professional training and the promotion of the National System of Science and Innovation. It is striking that the Government raises similar levels of investment for tourism (3.4 billion euros) than for the national science system (3,380 million euros).

These items are complementary to the generic State budgets and must be justified in terms of innovation and return, so they do not represent the total percentage that Spain invests in science globally.

Investments in science include projects such as the development of research in sustainable plastics, promotion of the aerospace sector and a reform of the Science Law. For its part, the strategy to justify investments in tourism revolve around the concept of sustainable tourism. The construction of a “tourist intelligence system based on the data economy and interoperability” is also established.

Hydrogen, AI and the digitization of the education system complete the investment picture 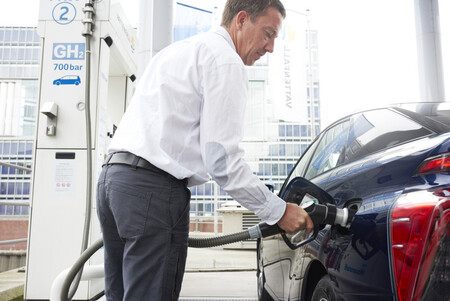 Other future technologies such as artificial intelligence or green hydrogen are also considered. The Government takes advantage of the different innovations to sign up to attract European funds. In the case of the first, the National Artificial Intelligence Strategy was presented. About 500 million euros that “is in the last game” and have 10 times less investment than mobility or brick, as he points out Andres Torrubia, co-founder of the Institute of Artificial Intelligence.

Europe has created these funds to promote innovative initiatives and inspectors will arrive in a few years to verify this. They are a complementary investment to the Budgets and therefore sectors such as tourism (€ 3,400M) have to surround themselves with concepts such as “sustainability” to be part of the plan.

At the time, it was detailed that among the investment in AI, 275 million would be dedicated to technological development, 133 million in integration, 42 million to attract talent, 42 million for data platforms and 8 million for a regulatory ethical framework. The difference between the initial 600 million and the current 500 million are the 100 million for the public administration, which have been included in the other item.

In addition to AI, it will invest in renewable hydrogen (1,555 million euros), biodiversity (1,642 million euros) or the modernization of the health system (1,069 million euros). In the case of sectors such as hydrogen, the Government is targeting a technology where significant private sector investments are announced.

“It is not yet known very well how much of the funds will be subject to public bidding, how much will be offered as partial co-financing of financially structured public-private projects, or in concessions, and how much will be awarded as direct grants“, explains Enrique Feás, professor at IE University and state economist.

A plan that has detailed the sectors and the type of initiatives it intends to carry out, but where the details and the final amount to be invested in each particular project is left for the future. We will have to wait to see what the Commission thinks about this plan, what results will be achieved in a few years and to what extent in the future Europe understands that the funds were invested correctly.