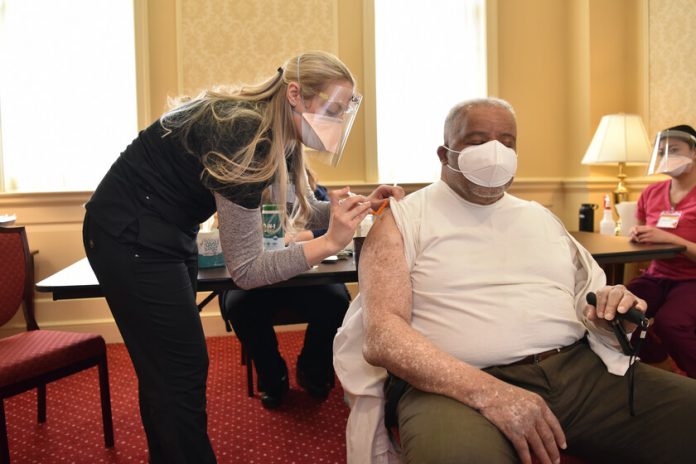 In January, there were suspensions of the first doses and shortages to inoculate the second ones due to production problems at Pfizer and Moderna’s delays in the delivery of vials. In March, the cases of thrombi in those vaccinated with AstraZeneca that severely eroded confidence in this vaccine and forced to reconsider the age groups it was aimed at. And in April, new cases of thrombi in young and middle-aged women vaccinated with Janssen in the United States, something that led to Johnson & Johnson paralyzing the administration of doses of its own vaccine.

The vaccination race against COVID-19, one of the great events of our lives, is presenting some complications, and the latter is especially delicate: Janssen’s is a key vaccine to reach the deadlines set by the Government of Spain, which set for the last week of August the figure of 33 million vaccinated: 70% of the Spanish population, and therefore, the longed-for group immunity. However, the vaccine that does not need deep freezers or a second dose is on a pause from which it will be necessary to see when it comes out, and in what way. Any day that passes without recourse to its doses will further jeopardize the achievement of the summer goal.

The first group to be administered this vaccine before the pharmaceutical company announced a suspension of its administration was citizens between 70 and 79 years old, who until now had also received doses of Pfizer and Moderna.

A day before the first single doses of Janssen were to be administered in Spain, this Wednesday, April 14, the recommendation of the Center for Biological Evaluation and Research of the United States Food and Drug Administration appeared, who asked to stop administering doses of this vaccine after detecting six cases of thrombi in women between 18 and 48 years old who had received it. One such case was fatal, and a total of 6.8 million Americans received the Janssen dose. An event similar to the one that occurred weeks ago with AstraZeneca and that resulted in only those over 60 years of age receiving this vaccine, although its benefits continue to outweigh its risks.

Time to do the math and launch hypotheses regarding Janssen to see what Spain needs to reach the goal set, that of group immunity at the end of August. As of April 13, according to the Ministry of Health: 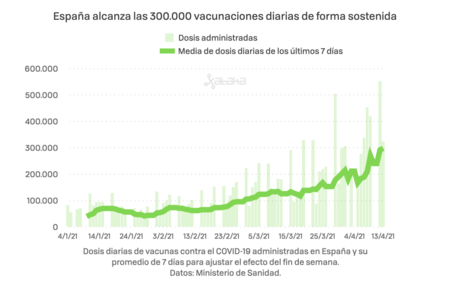 The Government’s forecasts regarding the doses received in the coming months reach the month of June, the second full quarter. By then, 20 million doses from Pfizer, 7 million from AstraZeneca, 5.5 million from Janssen (equivalent to 11 million from other vaccines) and 3.5 million from Moderna are expected to arrive. 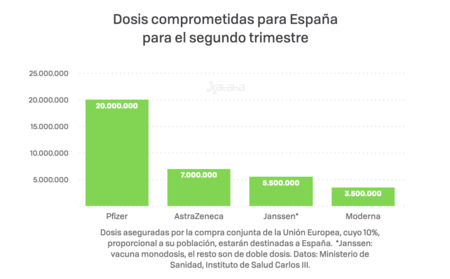 To achieve group immunity (33 million vaccinated) in Spain in the last week of August, it would be necessary to continue putting doses until reaching 66 million by then. If there are already more than 11 million administered, and all the vaccines used so far are double doses, the figure that remains from now until August 31 is exactly 54,926,343 doses. In the 139 days until that date, an average of 395,154 daily doses needed counting that they are all doubles. Let’s see what happens in two different scenarios regarding the use of Janssen, which would lower that number.

If the Janssen vaccine is not finally used

If finally the Janssen vaccine is not used in Spain (a scenario that seems very unlikely), those almost 55 million doses would have to be covered with the rest of the vaccines approved and in use. As the insured amounts currently only cover the second quarter, We cannot know if in the third quarter, the summer one, we would reach the goal or not. We would depend on the amounts received between July and September. Pedro Sánchez said that Spain had signed 87 million doses between April and September, without being shelled by pharmaceutical companies. A simple subtraction is worth to fix in 51 million doses in summer. If the delivery is similar to that of the second trimester, it would also be enough without Janssen, at least to cover first doses and have enough vials for when it is time for the second.

What we can know is if there are enough doses without Janssen by the end of June. And in addition, both Pfizer and Moderna have announced an increase in the forecast of doses delivered to the European Union. The goal set by the Government of Spain for the week of June 20 was 15 million vaccinated (30 million doses).

As of today there are, rounding, 11 million doses administered. The Pfizer, Moderna and AstraZeneca vaccines insured through June total 30.5 million doses. If we administer all of them, more than 40 million doses between those and those already inoculated to date. It is enough to reach those 15 million vaccinated at the end of June, although a bottleneck caused by the period of 3, 4 or 12 weeks between doses would be expected. The single-dose character of Janssen made that total immunity much faster for not having to wait for that window. In that sense, the deadlines would be somewhat complicated, and not because of not having enough vaccines, but because of the necessary wait between doses. Janssen is by far the fastest. 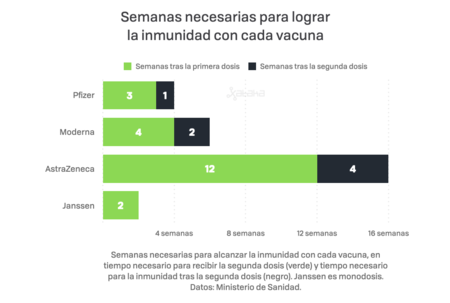 Although not all the second doses necessary to reach the goal of 15 million vaccinated were administered by the end of June due to a matter of time between doses, clinical trials leave the immunity obtained after a single dose in good place for the three vaccines that are They are administering right now in Spain: Pfizer, Moderna and AstraZeneca, with 52%, 64% and 80% efficiency respectively.

Not only is the risk of developing symptoms reduced in the event of contagion, but it is less likely that in the event that symptoms occur, they will be severe. Andalusia, in fact, has asked to space out the second dose of Pfizer and Moderna in order to reach a larger population with an early puncture. Italy and France have already approved extending that window from 21 to 42 days for the same reason.

READ:  How vaccine production has increased and how this will affect Spain

If the Janssen vaccine is used within a few days

If the pharmaceutical company resumes its deliveries and the Spanish Government decides to advance the vaccination campaign with Janssen in a few days, so that the delay is very slight, the total of doses available in the second quarter would reach 36 million: 30.5 double dose and 5.5 single doses. 20.75 million potential vaccinated in total to which must be added the 3.1 million already vaccinated. We would depend on how long it takes us to resume the campaign with Janssen.

Although the start of vaccination was slow, also due to the complex logistics of vaccinating inmates in residences traveling to them, and due to delays in deliveries, the current rate is as expected (the percentage of vaccines administered over those received is around 85 % -90%) and the countries of the European Union, which follow a joint strategy, advance at very similar rates. If the Janssen vaccine ends up being approved and vaccination with it is resumed, the rhythms could continue as before and it would be much more feasible to reach the objectives set. A small delay in administration would be easy to correct over the next four months if it is decided that, as with AstraZeneca, the benefits outweigh the risks.

A better understanding of why these rare cases of thrombi occur after receiving the Janssen and AstraZeneca vaccines (both act as viral vector vaccines) could increase confidence in their use, especially if, as suggested by the first studies, they would also be treatable conditions very rare. And in that case, there would be less and less reason to think that we would not reach group immunity by the end of the summer.