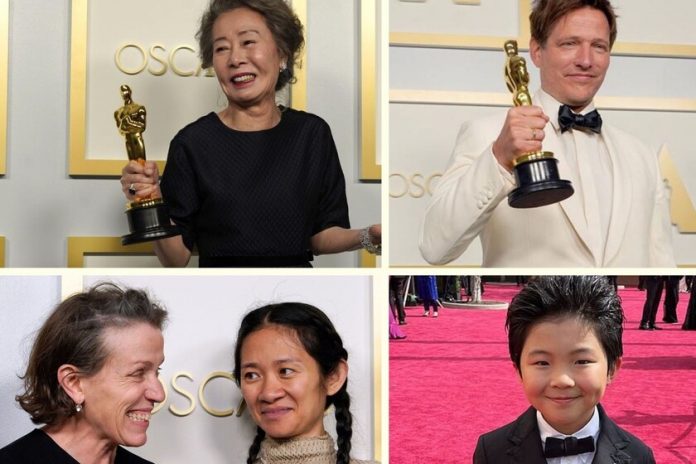 Despite the fact that this year’s Oscars gala has been described as cold, boring, bland and, above all, atypical, we have seen certain details that have slightly reminded us of what the world’s largest film celebration ceremony is like (or, at least , how “normal” it has been in other years compared to this one).

In this 93rd edition there has been no place for big celebrations but we have rescued some memorable moments that drew at least a smile from the audience.

The 73-year-old ‘Minari’ actress has undoubtedly been in charge of putting her speech the touch of humor of the night. In the most aseptic gala that is remembered, this Korean veteran has shown the most tender humor, raising the applause among the (scarce) public and filling the networks with ovations.

A speech in which Yuh-Jung tells Brad Pitt (producer of ‘Minari’) that he is “delighted to meet him” remains to be remembered, and that “Where was he when they were shooting?” In addition, he boasts that almost no one in Europe pronounces his name well “although today they are all forgiven.”

The protagonist of ‘Nomadland’ lived, despite everything, one of the great nights of her life, since she got her third and fourth Oscar in a single gala (equaling Meryl Streep and Jack Nicholson for acting awards). McDormand won the award for best leading actress and best film, as she is also the producer of ‘Nomadland’, and celebrated it Howling like a wolf on stage!

Ford was in charge of presenting the award for best editing and, to demonstrate the importance of that category, he read numerous reviews of what he called “a film in which I have participated.” The comments were all negative: “with each viewing, the movie gets worse”, “the opening sequence is too cumbersome”, “the voiceover seems to be drugged”, “the dialogue in flashback is very confusing” … it was about ‘Blade Runner’. The audience burst into laughter and applause.

From now on he should invent the Oscar award for the best loser of the night … and give that first award to Glenn Close. The actress of ‘Hillbilly, a rural elegy’, is more than used to being nominated and leaving empty: with yesterday’s there have already been eight times.

But despite the fact that Close’s shelves do not feature this golden statuette, she takes her defeat with humor. Her reaction after knowing last night that she was not winning made her a trending topic instantly: Close celebrated his defeat by dancing!

The little actor from ‘Minari’ starred in his moment before the gala started: he hit the red carpet and began to move his skeleton. Dressed in a mask and different socks, the actor could not contain his excitement and his charismatic dance has already been for posterity.

The emotional speech of Thomas Vinterberg

The director of ‘Otra ronda’ managed to make our hearts shrink with his speech of thanks after winning the Oscar for best international film.

The Dane revealed a startling fact: when the film had only been shooting for 4 days, his 19-year-old daughter died in a traffic accident. Since then, his intention has been to shoot a film that “celebrates life.” Of course, he dedicated the award to his daughter: “This is a miracle and you are part of it,” he said.

The actor had not attended the ceremony and was not even allowed to go live! Also, due to the time change, in Wales (where Hopkins lives) it was early morning when his name was announced as the winner.

Despite the coldness of saying goodbye to the gala without a winner, the actor wanted to send a video to give thanks, proud to be the oldest performer to win it (he is 83 years old) and the first to do it while he sleeps! Of course, the Welshman has dedicated it to Boseman.