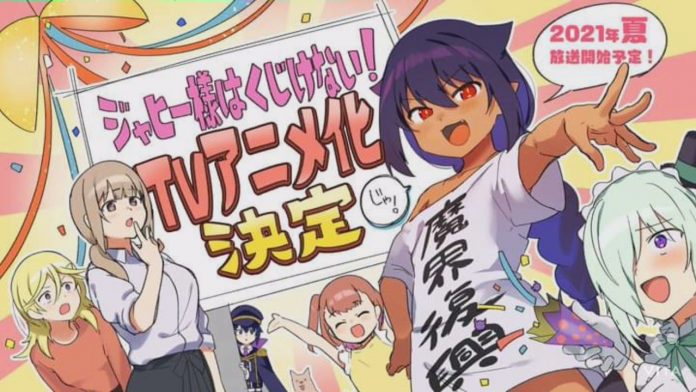 The Great Jahy Will Not Be Defeated!, the comedy manga by Wakame Konbu inspired by the most famous The Devil Is a Part-Timer!, will receive an anime adaptation in 2021, with a release set for this summer. For the moment Square Enix has not revealed details on the production team, but the official website confirms that the premiere will air in July.

For those unfamiliar with the work, remember that The Great Jahy Will Not Be Defeated! is a manga serialized monthly on Square Enix’s Gangan Joker, currently in progress with 6 volumes published. The synopsis reads as follows: “The great Jahy, second in command of the King of demons in the dark realm, has always been considered a frightening figure, feared and respected by all. During a fight with a sorceress, however, the mana crystal that guarantees balance in the realm of shadows is destroyed, and Jahy finds herself transported to planet Earth, in a much less formidable form. Awakening in a one bedroom apartment in Japan, Jahy searches for a way to go back and regain her powers, but first she has to survive!“.

The manga clearly takes inspiration from The Devil Is a Part-Timer! by Satoshi Wagahara, with the protagonist forced to work with her former opponent as she searches for a way to return to her world. According to the latest Square Enix reports, sales are very promising, and in view of the launch in Western countries it was considered a good idea to advertise the work with a television adaptation.

What do you think of it? Are you interested in this series? Tell us in the comments! In the meantime, we take the opportunity to remind you that the aforementioned The Devil is a Part-Timer, which ended in 2020, will soon receive a second season of the anime!